As the N.F.L. makes plans to return to stadiums at full capacity this season, researchers published findings that “fan attendance at N.F.L. games led to episodic spikes” in the number of Covid-19 cases. 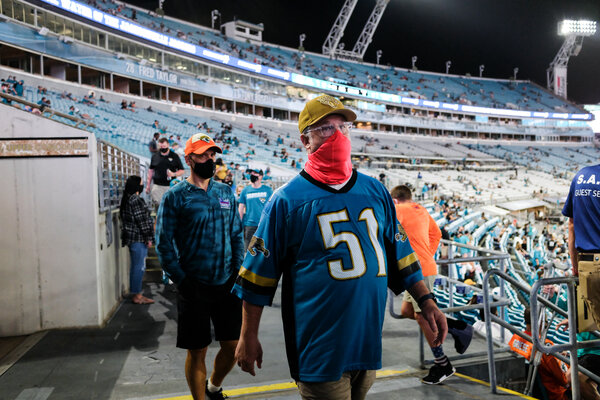 Major League Baseball, the N.B.A. and other sports leagues have started to let fans back into their stadiums and arenas with most teams limiting attendance to 10 or 20 percent of capacity, but some allowing more. The N.F.L. has even grander plans. Last week, Commissioner Roger Goodell said the league hoped to open all its stadiums at full capacity when the season kicks off in September.

“All of us in the N.F.L. want to see every one of our fans back,” Goodell said in a conference call with reporters.

Yet new research submitted to the scientific journal The Lancet in late March suggested that there was a link between the games that had large numbers of fans in the stands and an increase in the number of infections in locales near the stadiums. The study, which is being peer reviewed, is one of the most comprehensive attempts to address the potential impact of fans at N.F.L. games.

The authors, led by Justin Kurland of the University of Southern Mississippi, used the number of positive cases not just from the counties where the 32 N.F.L. teams play, but also from surrounding counties to track the spread among fans who may have traveled to games from farther away. After adjusting the figures to eliminate potential false positives and days when counties did not report cases, they found surges in infection rates in the second and third weeks following N.F.L. games that were played with more than 5,000 fans in attendance. The study does not prove a causal link between fan attendance and Covid-19 cases, but suggests that there may be a relationship between the two.

“The evidence overwhelmingly supports that fan attendance at N.F.L. games led to episodic spikes” in the number of Covid-19 cases, the researchers wrote.

Jeff Miller, the N.F.L.’s executive vice president for communications, public affairs and policy, said in an interview that public health officials in cities and states where N.F.L. teams play found no “case clusters” following the 119 games held with fans in attendance. Miller added that a study done by researchers at the M.I.T. Sports Lab, which was unpublished and independent, found no notable increases in Covid-19 infection rates “in the appreciable time frame following the games.” That study also looked at Covid numbers from surrounding counties but compared them to “synthetic” data used as a control group and found little difference between the two sets of numbers.