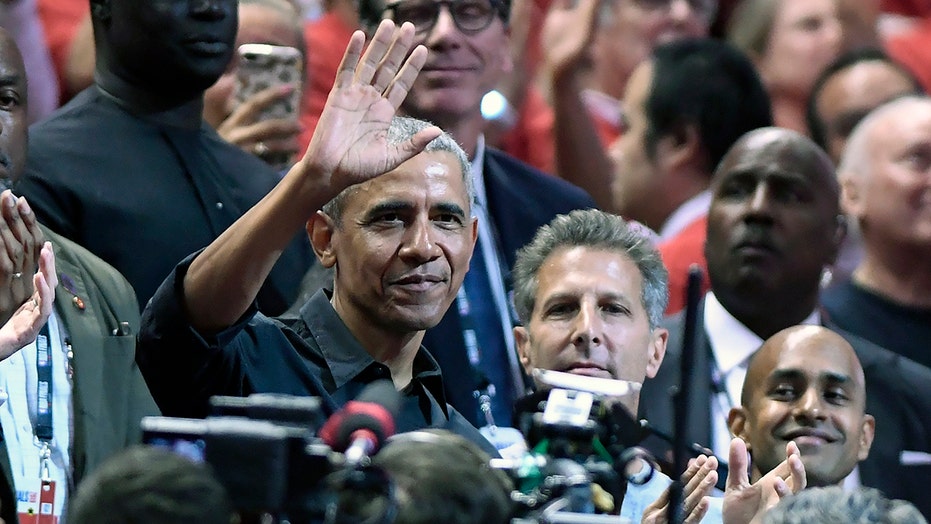 Former President Barack Obama was in attendance for Game 2 of the NBA Finals between the Toronto Raptors and Golden State Warriors on Sunday.

Obama sat next to NBA Commissioner Adam Silver across from the Raptors bench. He received a standing ovation and "MVP" chants from the fans at the Scotiabank Arena in the second quarter when he was shown on the arena’s video screen.

Before receiving the big ovation, he was seen walking into the arena with Raptors president of basketball operations Masai Uriji.

He also had an interaction with Drake, the Raptors’ team ambassador, before tip-off.

Obama appeared to spend the entire weekend in Canada. He met with Canadian Prime Minister Justin Trudeau at an Ottawa brewery Friday.

Sophie Prescott, the social media manager at Big Rig Brewery, told CBC she received a call Thursday that Trudeau would be dropping by with a “special guest.”

“We closed the whole place down for them so they had some privacy,” Prescott said. “But it was really just two guys kind of catching up over beer. It was really just all about friendship and making up for lost time.”

There were rumors prior to the game that Trudeau would be making an appearance with Obama at the arena, but the prime minister didn’t show up.

Obama ended up watching the Warriors take Game 2 from the Raptors, 109-104. The series is tied as it moves back to Oakland for Games 3 and 4. It’s unclear whether the former commander-in-chief will be in the Bay Area for the next couple of games.