To understand just how difficult it can be to penetrate the ego of the elite college football coach who believes he can control and manipulate everything in his wake, just consider for a moment that all Dan Mullen could muster on Wednesday is that he was sorry if he offended anyone.

For Mullen, it was about as close as you could get to a walk-back of his comment four days earlier that Florida should pack its stadium this week with 90,000 people to get a competitive advantage against LSU, risk of spreading COVID-19 be damned.

But what Mullen either doesn’t understand or can’t bring himself to admit publicly is that the problem isn’t who he offended, since that would actually be nobody. It’s the mind-numbing stupidity of a college football coach who, even seven months into the pandemic, can’t get his arms around the idea that the virus is still in control. 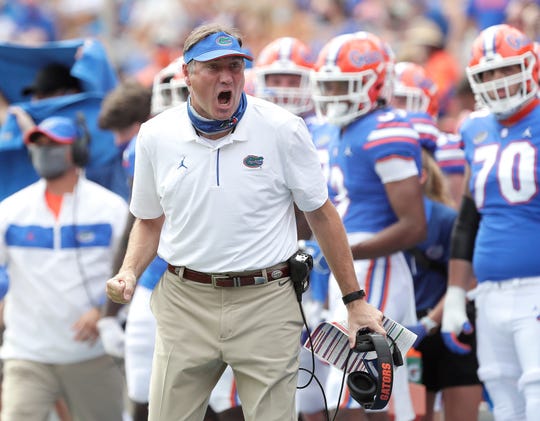 Florida head coach Dan Mullen will not be happy that Saturday's game vs. LSU has been postponed because of a COVID-19 outbreak on his team. (Photo: Brad McClenny, USA TODAY Sports)

Florida, as it turns out, isn’t playing LSU this weekend at all, much less in front of 90,000 people. The Gators turned up with positive tests Monday morning, which led to even more on Tuesday, which became a full-blown outbreak by Wednesday. According to athletics director Scott Stricklin, the Gators had less than 50 scholarship players available and thus decided it couldn’t possibly play the game.

“There’s a sense of frustration, but we understand this virus can sneak up on you and you can have a spread in the bat of an eyelash really,” Stricklin said.

One person who didn’t understand? Apparently, it was Stricklin’s coach.

Because even on Monday, as Florida began to suspect an outbreak, Mullen got up in front of the news media for a second time and had this to say when challenged about his desire to have have 90,000 fans at the game and the negative comments that came in response.

“I’ve been preparing for LSU,” Mullen said. “But I’ll be honest, if you look at what we’ve been able to do, the safety precautions we have that our players have followed, that our coaches follow, our staff follows, I think we’re a model of safety of what we’ve been doing during this time period so I’m really proud of how we’ve handled everything and how safe we’ve been and all the precautions we’ve had in place during this time.”

A model of safety? More like a model of why trying to play football in the middle of the pandemic is like walking a tightrope across the Grand Canyon.

According to Stricklin, the outbreak could have started with a couple players who felt some minor symptoms last Friday and did not report them to the medical training staff, writing it off as allergies or a cold. Those players then traveled and ate and shared a locker room with the rest of the team at Texas A&M and spread it to at least 21 players and two coaches as of Wednesday, some of whom were complaining of symptoms by Sunday night.

If you’re relying on college athletes who are trained to suck it up and play through anything to be honest about a headache or the sniffles when they know that could jeopardize their ability to play in a game, this is the inevitable result.

College football has decided to live with that, regardless of the disruptions it causes or what it means from a long-term or public health perspective. And Florida certainly isn’t the first or the last. Just within the SEC, Vanderbilt can’t play Missouri this weekend because they only have “high 40s” in available players, and Ole Miss’ attempt to play Arkansas could be in jeopardy this weekend due to an unspecified number of positive tests.

“We all know what we're dealing with here,” Vanderbilt coach Derek Mason said. “We’re dealing with times nobody has ever seen or had to go through before.”

At least you’d think everybody knows what we’re dealing with here, but apparently some folks needed a reminder.

Which isn’t to suggest there’s any sort of karmic correlation between Mullen’s idiocy and what happened to Florida’s roster shortly thereafter. COVID-19 is too serious of a public health problem to trivialize in that manner.

But when it hits you smack in the face the way it did with the Gators, you’d think some self-reflection might be in order for a football coach who still seems to be viewing this season through the prism of competitive balance in the SEC as opposed to just getting through this wretched year with the least amount of damage possible to ourselves and our communities.

That’s the only possible explanation for Mullen saying “hopefully the university administration decides to let us pack the Swamp” referring to Florida Gov. Ron DeSantis’ decision last week that sports stadiums could operate at full capacity.

In that moment, Mullen wasn’t thinking about what was best for the health of the community he lives in or the hospital capacity in Gainesville or the alarming rise in Florida’s positive tests in the past several days. He was thinking about one thing: What would help me beat LSU?

And even given several days to really think about what that meant, especially within the new context of an outbreak in his locker room, Mullen couldn’t actually bring himself to say the words he should have said: "I was wrong.”

“Coaches sometimes say things that are outside of their area of expertise,” Stricklin said. “And they're really good at what they do. Dan is really good at calling ball plays.”

Being good with football plays and bad with public health policy is no crime. But with COVID-19, we’ve already got enough people in this country cheering on recklessness under the guise of normality. We could do without college football coaches adding fuel to the fire.