March Madness, also known as Spring Sexism, is once again upon us. You can tell it’s here because millions of people who believe women can do anything suddenly start forgetting that women even play sports.

They fill out their bracket, singular, meaning the men’s, and if you ask if they’re filling out a women’s bracket, they look at you as if you asked them to take a cross-country flight sitting next to a guy without a mask who won’t stop coughing. Frankly, they might rather do that.

These people say the word “tournament,” singular, when there obviously are two tournaments, not one. CBS Sports, the broadcast and business partner of the NCAA, promotes its interactive men’s backet but won’t even deign to offer an interactive women’s bracket. Legendary coach Muffet McGraw wrote on Twitter that she was tired of turning on the TV “to see ‘NCAA basketball tournament’ only to realize that of course that means men’s. Tired of seeing Twitter accounts called March Madness and Final Four that are run by the NCAA but only cover men’s bball. …”

And we’re surprised that the weight rooms at the men’s and women’s tournaments weren’t equal?

Sometimes, the NCAA and its enablers in the sports media pretend women’s postseason basketball doesn’t exist. Just the other night, when the Rutgers men’s basketball team upset Clemson, CBS declared that it was the first Rutgers win in the tournament since 1983.

That was wrong. Rutgers has won dozens of tournament games since 1983, 36 of them in fact, including a runner-up finish in 2007. That would be the Rutgers women. CBS couldn’t have cared less, and many distinguished news organizations and members of the sports media followed right along on Twitter. 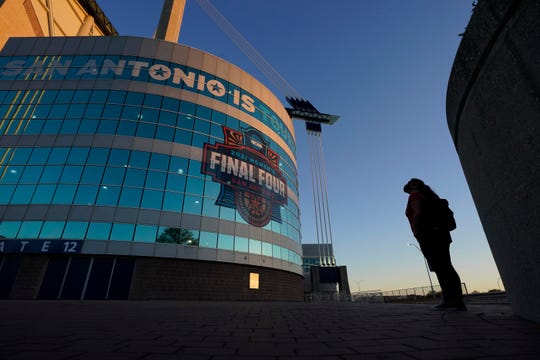 A visitor looks up at the logo for the Women's Final Four in San Antonio. (Photo: Eric Gay, AP)

You might say this is a little thing, just an oversight. It’s not. Not in 2021. It’s active, continuing, omnipresent sexism. NCAA and university leaders, CBS officials and sports journalists should know better, but they won't stop doing it.

The NCAA, the non-profit that should be bending over backwards to correct the media on its mistakes, among many other inequities, has instead been actively engaging in misogyny for decades. Take a look at its men’s Final Four logo. It says, simply, Final Four. If the NCAA wanted to show the least bit of respect for women’s basketball, not to mention be factually correct, it would add the adjective men’s. Will it? That’s highly unlikely. About 15 years ago, I asked then-NCAA president Myles Brand and was told the logo was trademarked and that was that.

'IT'S HER TIME TO TAKE OVER:' Dawn Staley determined to lift Black women coaches, win another title at South Carolina

As the women’s tournament begins Sunday, there are two paths showing the way forward. The easy one is to declare victory. The women now have a weight room, so all is well. This tells the NCAA that it can survive and even thrive bouncing from one sexist controversy to the next.

Noted Title IX attorney and Olympic gold medalist Nancy Hogshead-Makar said Sunday that not one school in a Power Five conference is in compliance with the law. All told, very few U.S. universities are. She and her organization, Champion Women, have calculated that if every school gave proportional sports opportunities to men and women, there would need to be 183,130 more women playing college sports than there are today.

But things are changing. In the last six months, Hogshead-Makar said that dozens of women athletes have sued their schools for intentional sex discrimination. Wouldn’t it be something if, say, 100 women’s basketball players announced they were suing their universities on the morning of the NCAA women’s final April 4? A hundred latter-day Curt Floods, heroes to millions, fighting for what’s right, all on one Zoom call? Can you imagine their power? There wouldn’t be a news outlet in the country that would overlook that.

Another option is Congress. It’s hard to imagine a more popular bill than one demanding that the NCAA and colleges everywhere treat women equally. It’s rather surprising that a Senator or member of Congress hasn’t already introduced it.

The spotlight will never be brighter on this issue than it is right now. The intense interest in Weight-gate has shown that America is more than ready to take this one on. Popular opinion is with our daughters and granddaughters and nieces and girls next door.

If everyone does nothing now, the NCAA might as well go ahead and slap a trademark on Spring Sexism.