Patrick Mahomes may have cleared the concussion protocol and get the go-ahead to play in the AFC Championship against the Buffalo Bills, but the Kansas City Chiefs star is reportedly still hurting.

Mahomes is still dealing with a toe injury he suffered during the Chiefs’ win over the Cleveland Browns in the divisional round and before he exited with the head injury, NFL Network reported Sunday.

Mahomes was seen hobbling around during the game but didn’t miss any plays because of the toe specifically. The toe injury was listed on the Chiefs’ injury report this week. NFL Network reported that Mahomes will see a specialist after the season is over to determine whether he will need surgery. 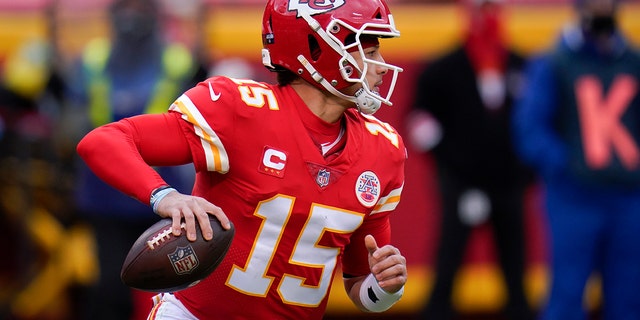 Kansas City Chiefs quarterback Patrick Mahomes looks to pass during the first half of an NFL divisional round football game against the Cleveland Browns, Sunday, Jan. 17, 2021, in Kansas City. (AP Photo/Jeff Roberson)

The Super Bowl LIV MVP was listed as a limited participant in practice, but reportedly took all or most of the reps at quarterback and it was the toe that affected him the most.

Mahomes was the one who told reporters Friday he was cleared to play. He said he and team officials didn’t believe there were any last effects from the injury.

The Chiefs’ quarterback is in the conference title game for the third consecutive time. Last season, he and the Chiefs defeated the Tennessee Titans.