Home » Sport » Paula Badosa’s Body Was Ready to Win, but Her Mind Was Not

PARIS — For Paula Badosa, the winning and accompanying expectations came far too quickly, as they often do for women in tennis, with some pretty terrible effects.

In 2015, she became the French Open junior champion, and began to hear all the talk of the glamour and glory that she would soon achieve. Two years later, she was struggling with depression, unsure what future she might have in the sport she loved, even as she tried to believe she could live up to all that had been predicted for her.

“It was very tough for me,” she said of that dark three-year period.

Badosa, 23, of Spain, lost on Tuesday in her first Grand Slam tournament quarterfinal, coming up heartbreakingly short in a marathon match against Tamara Zidansek of Slovenia, 7-5, 4-6, 8-6. She struggled to hold her serve and could not find precision on her groundstrokes in the biggest moments. At 6-6 in the third set, she had three break opportunities for a chance to serve out the match, but she could not convert them.

Tuesday’s other women’s quarterfinal was a close copy of the Badosa-Zidansek match: Anastasia Pavlyuchenkova of Russia beat Elena Rybakina of Kazakhstan, 6-7 (2), 6-2, 9-7.

Badosa’s success is especially poignant because she is part of a growing chorus of players who are speaking openly about the toll the game has on their mental health.

When Naomi Osaka, a four-time Grand Slam event champion, withdrew from the French Open after a showdown with tournament organizers over whether she would appear at mandatory news conferences, she said she had struggled with depression since winning her first United States Open championship in 2018.

The direct beneficiary of Osaka’s withdrawal was Ana Bogdan, 28, of Romania, who got a free pass to the third round. There, she lost to Badosa in three tight sets. Afterward, Bogdan said she completely understood Osaka’s decision because she, too, had battled depression this year.

“It’s not something very easy to handle,” Bogdan said.

The pandemic has been hard on athletes in every sport, but tennis players have had a particularly rough go. Their sport requires continual international travel. To gain permission to hold tournaments, organizers have had to cut the support staff players can travel with and largely limit player movements to designated hotels and practice and competition venues.

The open discussion of mental health issues has rattled some people at the highest levels of the sport. They have pledged to pay closer attention to the mental health needs of the players and significantly improve the resources available to them, especially during such a mentally wearing period.

Like so many fans and followers of the sport, some organizers may have forgotten that just because everything might look fine on the outside, turmoil may be just beneath for the teenagers and young adults who compete alone.

That is the story of tennis at the moment, and there may be no better example of this than Badosa. On the surface, she would appear to have a near perfect life, blessed with athletic talent, intelligence (she speaks three languages and is learning a fourth) and a stable family.

She is nearly six feet tall and often described as extremely marketable, which is what people in tennis say when a female player is very good at her sport and could have a career in modeling. Of course, that does not make winning tennis matches any easier.

It is not so different from the treatment Coco Gauff, who made her first Grand Slam quarterfinal on Monday, received when she made the fourth round of Wimbledon in 2019 at age 15.

“People came out with a lot of expectations for me, saying I was going to be the next this or next that,” Gauff, 17, said last week. “I realized I’ve just got to be myself.”

Badosa had to learn the hard way that success at a young age and good genes did not make her immune to depression.

“We are not robots,” she said. 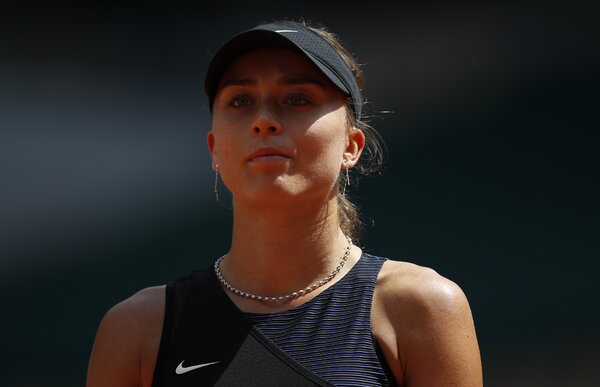 Born in New York to parents who worked in the fashion industry, sometimes as models, Badosa spent the first seven years of her life living in New Jersey. She moved to Barcelona at 7, began playing tennis and soon was a top junior in one of the leading countries in the sport.

When that French Open girls’ title arrived six years ago, so did the chatter about her future. Badosa heard every word of it.

“The expectations from outside were tough,” she said. She added: “You’re 18 and 19 years old. Your head isn’t ready to get that kind of information.”

When the wins stopped piling up, she sank into depression. She began therapy and searched for a support team that would value improvement. She found a kindred spirit in a new coach, Javier Martí. Like Badosa, Martí was once tapped to be a future star. He never made it.

Martí said when he first began with Badosa, she connected much of her self-worth to the scoreboard.

Badosa said the one thing that did not stop during the roughly three years she battled depression was her ability to keep working, though she knows not everyone struggling with their mental health can do that.

“‘If I win, I’m great. If I lose, I’m not good enough for tennis,’ was her way of thinking,” Martí said Monday. “She was not enjoying the process.”

Now she is, not only because this is the first time she made it past the second round in a Grand Slam event, but because, win or lose, she is trying only to improve a little bit each day. There is not much subtlety to her game. If she can find a way to hit the ball hard, and she nearly always does, she will.

It does not always work. Badosa said on Tuesday after her loss that she could not control her nerves in the biggest match of her career. “It’s complicated the first time you are in the quarterfinals of a Grand Slam and you want it so, so much,” she said.

If you believe tennis is not simply a sport but a form of self-expression, as nearly every pro does, then Badosa’s play at Roland Garros represents someone who has learned the body cannot do much without a healthy head, no matter how rosy life may appear.

She faced a match point against Bogdan but prevailed. In the fourth round, she rebounded after a second set filled with errors to win the third one against 20th-seeded Marketa Vondrousova of the Czech Republic, who started making her own errors as the pressure mounted.

“That is the challenge of tennis, because it is very, very mental, all the time playing with your mind,” Badosa said. “If the head is not ready when the body is, the pressure and the anxiety and depression are going to come. It’s just a very tough sport.”