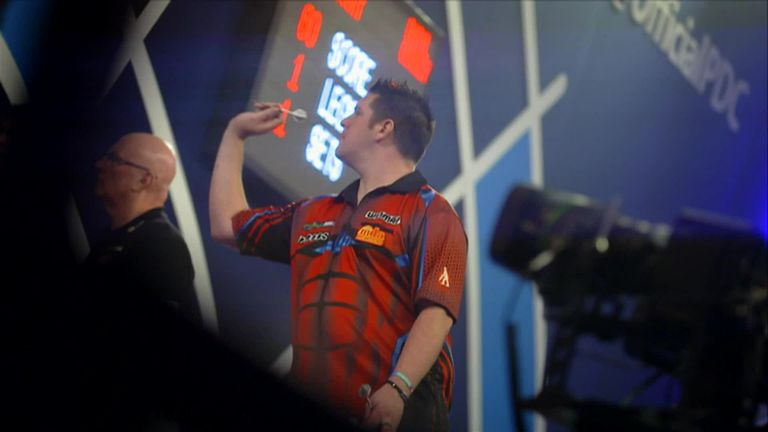 Daryl Gurney, Stephen Bunting and Gary Anderson came through their fourth-round matches at the PDC World Championship on Wednesday afternoon.

Gurney and Anderson underlined their credentials with eye-catching performances. Former Lakeside champ Bunting also reached the last eight for the second time in his career, and will be quietly confident of coming through the bottom half of the draw.

The final eight will be confirmed on Wednesday evening, with Gerwyn Price, Glen Durrant and Dimitri Van den Bergh among the big names looking to progress.

Gary Anderson said last week that this year has been a write-off. He is viewing the tournament as a shot-to-nothing. But judging by this display, he has every reason to believe a third world title is within his grasp in the coming days.

Following his explosive ‘table-gate’ interview, Anderson shared a joke with Petersen during his walk-on. But once the match started, there was no messing; he was straight down to business, winning the first set without dropping a leg.

The African Warrior responded, winning the first two legs of the second set. However, Anderson stunned the underdog with a 160 checkout, following up with two more legs to build a 2-0 lead. 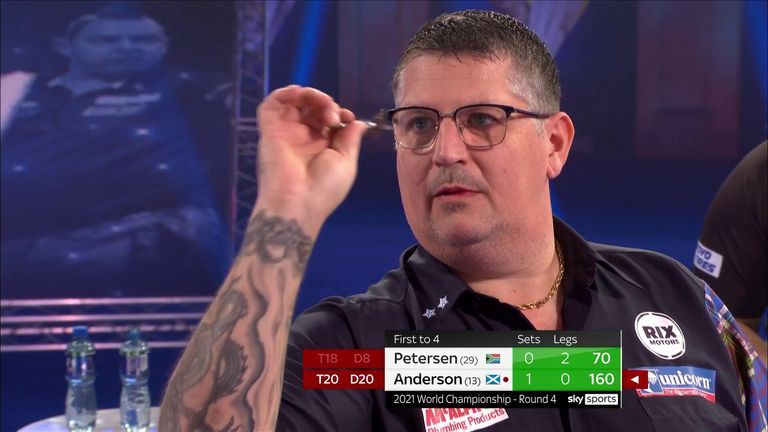 Petersen took a 2-0 lead again in the third stanza, but once more the two-time world champ came storming back, breaking the South African’s throw in the decider with a 12-darter for a third consecutive set.

It seemed to break Petersen’s resolve, as the Flying Scotsman used all his experience to see out a white-wash victory. 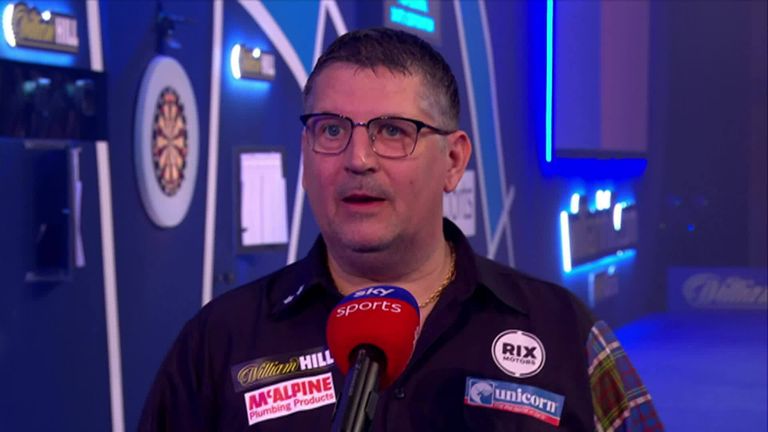 Gurney picked up from where he left off in his impressive victory over Chris Dobey, breaking throw with a 125 checkout in the first leg. That laid the foundations for him to take the opening set.

The Derry native had a chance to take a 2-0 lead, but failed to find the outer ring with two darts, and the big Dutchman levelled it up. Nonetheless, the Premier League star didn’t let that disappointment affect him, bouncing back with a 10-darter, having missed D12 for a perfect leg. He proceeded to comfortably take the third set. 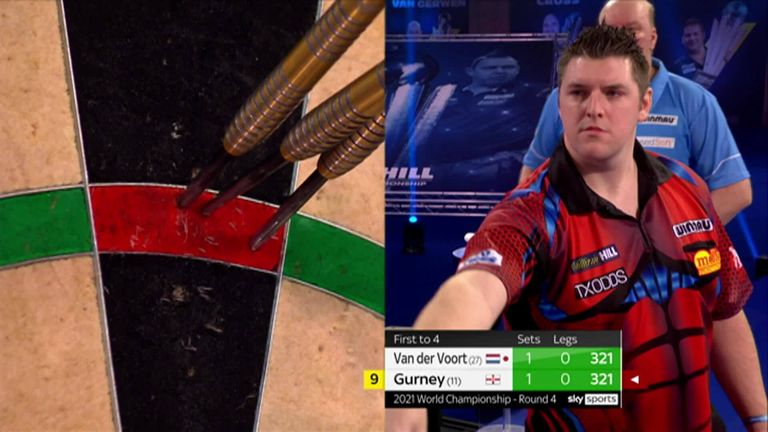 Van der Voort could not arrest his opponent’s momentum, as the two-time major winner broke with a Shanghai finish to take the fourth set. The Dutch Destroyer did pull one back, but Gurney was too strong.

The 11th seed did show some nerves, missing six match darts, before returning to finish the job in the following leg. 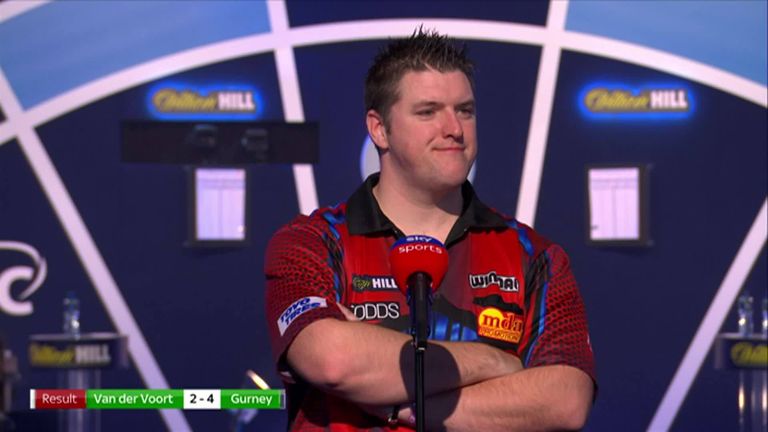 Six years on since Bunting reached the PDC World Championship quarter-final on his debut, the 35-year-old is back in the last eight. 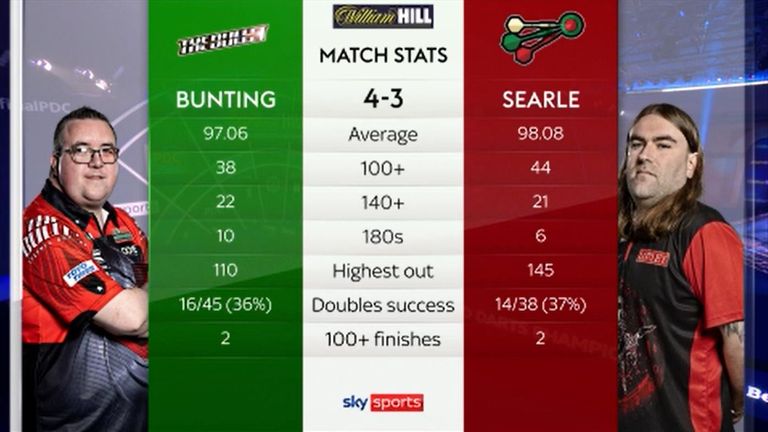 The Bullet took the first set with relative ease against the throw, but ‘Heavy Metal’ then came storming into the contest.

Searle brought the second set to a deciding leg, but it looked a lost cause when Bunting opened with a maximum. Searle was afforded a shot at the bull, but failed to take his opportunity, and the former Premier League star took a 2-0 lead.

Bunting missed six set darts in the third, and Searle brought it back to 2-1. The 26th seed’s failure to build a 3-0 cushion appeared to be a major turning point. Within minutes, they were level at two apiece.

The interval seemed to come at the right time for the St Helens native. He re-emerged with a pep in his step, winning four consecutive legs.

However, Searle was never going to lie down without a fight, and replied with four unanswered legs of his own, taking the lead in the deciding set.

‘Heavy Metal’ then produced a stunning 11-darter against the throw to move within one of the match. But Bunting responded in kind with an 11-dart break, and checked out 107 to force a last-leg decider. 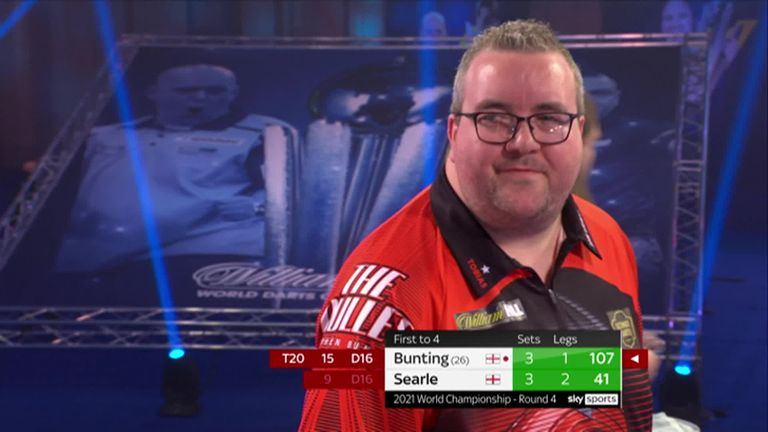 And the Bullet held his nerve in a dramatic last-leg, pinning D20 after Searle had hit 170 to leave 16.

Coverage of the final three fourth-round matches continues on Sky Sports Darts on Wednesday evening from 6pm, with Gerwyn Price, Glen Durrant and Dimitri Van den Bergh all in action.