Serena Williams beat Vitalia Diatchenko two sets to one in the first round of the French Open on Monday.

Williams struggled in the opening set of the match, losing 6-2, before bouncing back by winning 12 of the last 13 games, to win the second and third sets 6-1 and 6-0.

Though her exemplary ballstriking salvaged what could have been a disastrous end to her clay court season, a key talking point after her win was her outfit.

The off-white, zebra-striped, ensemble featured a crop top and skirt designed by Virgil Abloh, who has colloborated with Kanye West and Nike.

It was “pretty epic” according to Jose Morgado, a prominent tennis journalist for Record, a sports newspaper in Portugal.

Speaking to the Tennis Channel after her first round win, Williams said: “Virgil Abloh designed it and so I was really excited because he’s the hottest designer right now and he’s amazing.

“It’s the second time we’ve worked together. And it has words in it in French. It talks about me being a mom and me being a queen, as all women are. A champion. It’s positive reinforcement for me, and I kind of love that.”

See her outfit below: 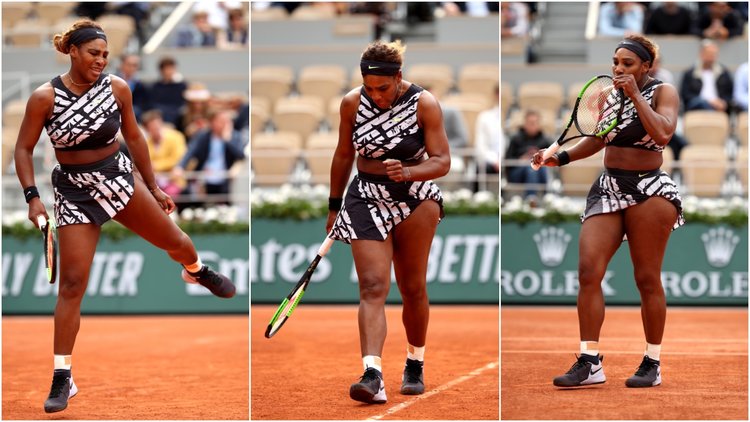 She teased the look on her official Instagram page on Sunday.

Williams said at the time that the catsuit was “Wakanda inspired” andmade her feel like a warrior princess from the the smash hit Marvel Comics movie “Black Panther.”

But her outfit last year was more than a fashion statement as it was designed to help prevent blood clots after doctors found a hematoma – localized bleeding outside of a vessel – in her body, following the birth of her daughter Alexis Olympia Ohanian Jr. in 2017.

Not everybody was a fan of Williams’ Wakanda catsuit as the president of the French Tennis Federation,Bernard Giudicelli said in an interview with France’s Tennis Magazine that “you have to respect the game and the place” and the outfit would no longer be accepted.

With her 2019 French Open victory over Diatchenko, Williams faces either Kurumi Nara or Dalila Jakupovic in the second round later in the week.

It is likely fans will continue to see her in Abloh designed clothing in Paris.