Marleau skated in his 1,768th career game to break Gordie Howe’s record when the San Jose Sharks took on the Vegas Golden Knights on Monday night.

Though it was on the road, an exuberant pro-Golden Knights crowd gave Marleau a rousing welcome during warmups.

Marleau’s wife, Christina, and four sons were in attendance, which wouldn’t be possible in San Jose, where fans still aren’t allowed during the pandemic.

“My wife, I couldn’t have done it without her over all these years,” an emotional Marleau said prior to San Jose’s morning skate. “She’s by far my biggest supporter. I can’t thank her enough and I can’t thank the boys enough. 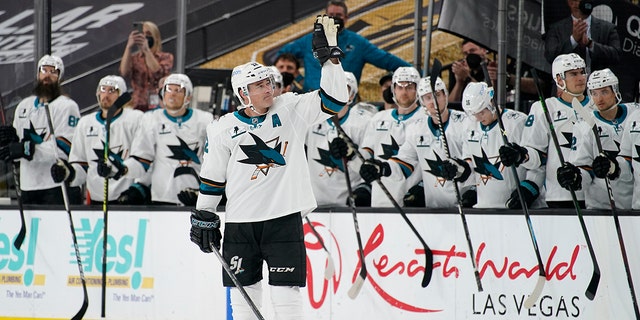 San Jose Sharks center Patrick Marleau (12) waves to the crowd during a small ceremony to mark his passing Gordie Howe for most NHL games played in the first period of an NHL hockey game Monday, April 19, 2021, in Las Vegas. (AP Photo/John Locher)

Over his career, the 41-year-old Marleau has made 1,596 appearances with the Sharks, 164 with the Toronto Maple Leafs and an additional eight as a member of the Pittsburgh Penguins.

Howe played in 1,767 regular-season games and 419 more in the World Hockey Association, the latter of which are not recognized by the NHL.

“I feel very fortunate to have a front row seat for it,” said Golden Knights coach Peter DeBoer, who coached Marleau for two-plus seasons in San Jose. “I feel fortunate that I know the man and the athlete having coached him. He was a gentleman. He was a great teammate. That’s gonna be one of those things I’ll be able to tell my grandkids about one day, that not only did I coach him, but I was there for that night, pretty special accomplishment.”

During his almost quarter-century career, Marleau has 566 goals, 1,196 points, three All-Star appearances and two Olympic gold medals for Canada in 2010 and ’14.

The respect Marleau has established throughout his career was evident by the comments of several Golden Knights, San Jose’s chief rival since Vegas entered the league in 2017. Both Marc-Andre Fleury and captain Mark Stone praised Marleau for his durability through two eras of hockey, one where players were much more physical at the start of his career, to the current state of the NHL, where skaters are faster and conditioned for a more up-tempo style.

“He’s been so consistent throughout his career. He’s been an iron guy. Didn’t get hurt for long periods of time. Every year he’s always been a very good player, also. To hang in there that long and play that many games, it’s amazing. He’s a guy who’s very respected around the league.” 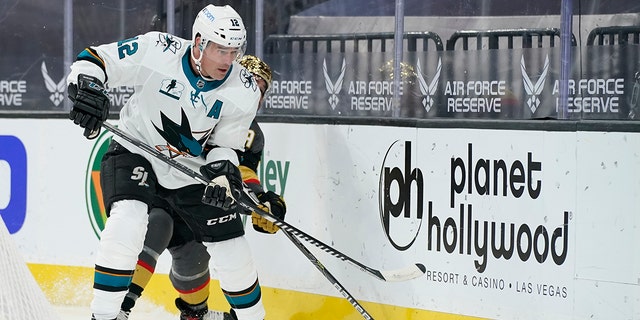 Marleau — who has played through bouts with the flu, numerous injuries and once chartered a plane to join his teammates in Nashville for a game in 2009 after the birth of one of his sons — played in his 899th consecutive game since last missing a matchup when he was 29.

“You go battle with these guys day in and day out, you play against them, and they know the grind and know what it takes to play in this league,” an emotional Marleau said. “For them to show their respects and have all these kind words, it’s very humbling.”

Barring anything unusual, Marleau will play his 900th consecutive game in Las Vegas on Wednesday and would become the fourth player ever to reach that mark.

Until Marleau’s milestone moment just off the Las Vegas Strip, no one has been able to reach a record many thought was unbreakable when Howe retired.

“They probably said this about Gordie Howe as well, but I really truly believe it’s a record that’s not going to be broken,” San Jose coach Bob Boughner said. “I don’t see anybody lasting that long.”

Added Sharks teammate Erik Karlsson: “This is more than a personal milestone. I think that this is not only a historic moment for Patty and this organization, but I think it’s historic for the entire league and every player that has played this game with or against him or prior to his time.”

The game on Monday was stopped early on for a congratulatory message from NHL Commissioner Gary Bettman that was shown on video screens.

“To be merely mentioned in the same sentence as Gordie Howe is an achievement most hockey players can only dream about,” Bettman said. “To break one of his records is historic.”

Marleau, who made his debut on Oct. 1, 1997, at age 18 years and 16 days — the youngest for any player in the NHL since Lee Wharton debuted at 17 years, 81 days in 1945 for the Rangers — is not the only professional athlete to break a significant record in Las Vegas.