Home » Sport » Sweden dominated the U.S. from start to finish. 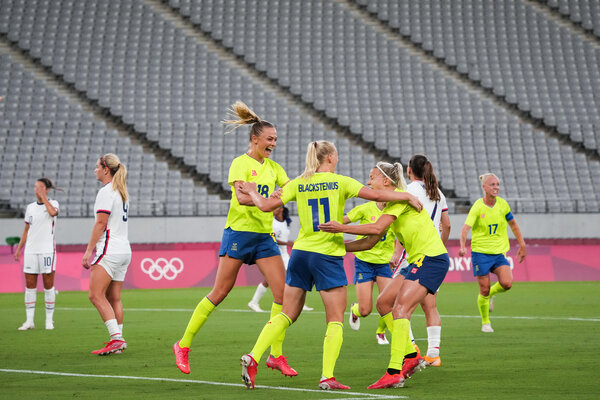 CHOFU, Japan — Five years they had waited for this game.

Five years since Sweden had dashed the United States women’s soccer team’s hopes for an Olympic gold medal at the 2016 Rio Games. Five years since a defeat that forced the Americans to look in the mirror and ask hard questions about their age, their dominance.

Five years of waiting, only to end up right back in the same place.

The United States opened the Tokyo Olympics on Wednesday just as they had ended the Rio Games five years earlier: on the wrong end of a humbling, embarrassing defeat to Sweden. Then it was a loss on penalties in the quarterfinals; this time the result was much earlier and not nearly as close: Sweden 3, United States 0. But the sting and the statement baked into the defeat was just as real.

“It feels like a big deal,” defender Kelley O’Hara had said Tuesday of the rematch on Wednesday. “It feels like the Olympics. It’s what we’ve waited now five years for, to be back here.”

They just never expected it to end like this.

The defeat was the Americans’ first in 24 games under Coach Vlatko Andonovski, and their first against any opponent since a loss to France in January 2019. And it will force them to scramble to recover in the Olympic tournament. Games against New Zealand and Australia await in quick succession in the first round, and tougher opponents like Britain and the Netherlands could await in the medal round.

But first, the Americans will have to sort out just what went wrong at Tokyo Stadium.

Striker Stina Blackstenius delivered a goal in each half for Sweden on Wednesday, a glancing header in the 25th minute and a point-blank finish in the 54th that felt like a just reward for a dominant Sweden attack that had the Americans on their heels as early as the game’s opening minutes.

The United States, under pressure again and again, tried everything to turn the tide. Carli Lloyd and Julie Ertz — in her first appearance in months — came on at halftime, and Megan Rapinoe entered the game about 20 minutes later. Even the departure — mercifully, in the Americans’ view — of Blackstenius in the 64th minute didn’t help; her replacement merely picked up where she left off by claiming an open header, and Sweden’s third goal, eight minutes later.