Tamara Press, a dominant Soviet shot-putter and discus thrower who won three Olympic gold medals in the 1960s but who was the focus of speculation about her gender because of her physique, died on April 26. She was 83.

Her death was announced by the Russian Ministry of Sport, which did not specify where she died or cite the cause.

Press, who was 5-foot-11 and 225 pounds, began to attract international notice in 1958, when she won the gold medal in the discus and the bronze in the shot-put at the European Athletic Championships in Stockholm.

But Press and her sister, Irina — who won gold medals in the 80-meter hurdles in Rome and in the pentathlon in Tokyo — received more than glory from their athletic careers.

They heard cruel taunts about their size, some of them from sportswriters who compared Tamara to a defensive tackle. She and Irina were sometimes called the “Press brothers.”

“I’m a champion, but you can see I’m a woman,” Tamara Press told The Associated Press in 1964. “The fact that a girl is a sportswoman has nothing to do with femininity.” 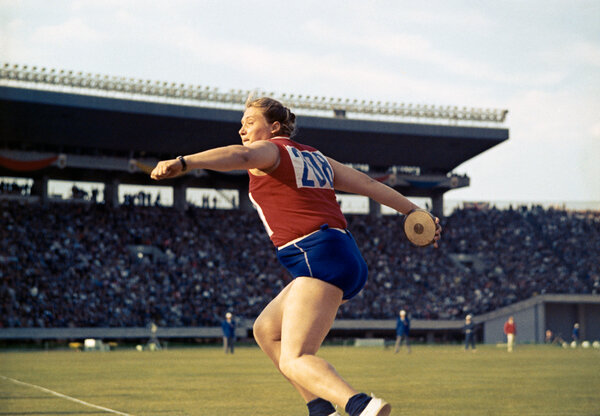 Seven decades later, a contentious debate continues in track and field regarding the eligibility of intersex athletes — those born with sex characteristics that do not conform to binary descriptions of male and female.

Caster Semenya, a two-time Olympic champion at 800 meters, has been challenging, so far without success, the rules of World Athletics, track and field’s governing body. Those rules require intersex athletes who identify as female to suppress their natural testosterone levels below that of men before being able to compete in women’s races from a quarter-mile to a mile.

World Athletics has acknowledged that the restrictions are discriminatory but nonetheless says they’re necessary to provide a level playing field during competition. Critics, including the World Medical Association and the United Nations High Commissioner for Human Rights, have called the rules unnecessary and humiliating.

In 1966, when Press was 29, her career (as well as her sister’s) came to a near-total end when they decided to withdraw from the European Athletics Championships in Budapest.

It is not clear why Press decided to withdraw. Had she taken anabolic steroids to gain strength, endurance and bulk, she might have aroused suspicion, but she would have faced little risk of being detected, because drug testing was in its infancy in those days.

If she was intersex, Press might have feared failing a new test instituted at the athletics championships: the so-called nude parade, which required women athletes to appear before a medical panel that would determine their eligibility.

“There was something different about the Press sisters,” said John Hoberman, a historian of doping in sports and the author of “Testosterone Dreams: Rejuvenation, Aphrodisia, Doping” (2005). He added that it was “not out of the question” that both things were true — that the sisters were intersex and that they also used steroids.

All that Soviet officials would say about the sisters’ absence from the meet is that they had to stay at home to care for their sick mother.

Tamara Natanovna Press was born on May 10, 1937, in Kharkov, Ukraine, and lived there until her family was evacuated to Samarkand, Uzbekistan, early in World War II. Her father was in the Soviet military and died in battle in 1942. At 18, Tamara moved to Leningrad to train under Viktor Aleksyev, a renowned track and field coach.

Following the Press sisters’ decision not to compete in Budapest, Tamara Press stayed active until 1967. At one of her last meets — the Moskow Spartakiad, an all-Soviet event that did not require gender testing — she won the shot-put. She retired that year.

In the years after she stopped competing, Press worked as an engineer and a coach. In 1996 she worked to help re-elect Boris Yeltsin as Russia’s president. She was also the vice president of the Physical Culture and Health Fund, a charity that helps promising Russian athletes, and the author of several books, including “The Price of Victory.”

In 2012, President Vladimir Putin wished Press a happy 75th birthday, saying in a statement, “You earned the respect of opponents and the love of millions of fans.”

Information about her survivors was not immediately available. Her sister died in 2004.

In 1996, as the Summer Olympics were taking place in Atlanta, Press told The Christian Science Monitor that her success in the 1960 and 1964 Games “was a victory for our country,” adding, “Communism — that’s another question.”

And she recalled that she was so focused at the Tokyo Olympics that at some point she was unaware that one of her competitors had dropped the shot on her thigh.

“There was so much tension that I didn’t even notice,” she said. “After the competition I saw a black mark on my leg and thought, ‘What’s this?’”