Home » Sport » The Best Team in the World. And the Second-Best.

PARIS — One got the feeling watching the Women’s World Cup match on Sunday night that the reserves for the United States women’s soccer team could branch off from their compatriots, form their own sovereign country with its own national team, and make a credible run for the trophy at this summer’s tournament.

That’s how deep the American’s well of talent looked at the Parc des Princes in their second match of the group stage, how thoroughly dominant and at ease they were over the course of their 3-0 victory over Chile, all while several of their best players were left watching from the bench.

Coach Jill Ellis made seven changes to the starting lineup she used in the team’s 13-goal thrashing of Thailand last week. And still the readjusted group on Sunday scored three in the first half — two from Carli Lloyd, one from Julie Ertz — and cruised the rest of the way to clinch a spot in the knockout stage of the tournament before their final group stage match this Thursday against Sweden.

For Ellis, the perceived benefits to such an approach were multifold.

There was the issue of team spirit. Ellis has revealed herself as a coach sensitive to the emotional makeup of the group she leads, and an opportunity to let more of her players join in on the fun and joy of playing in a World Cup match, to feel like a needed cog in the machine, was one she would not let slip by. 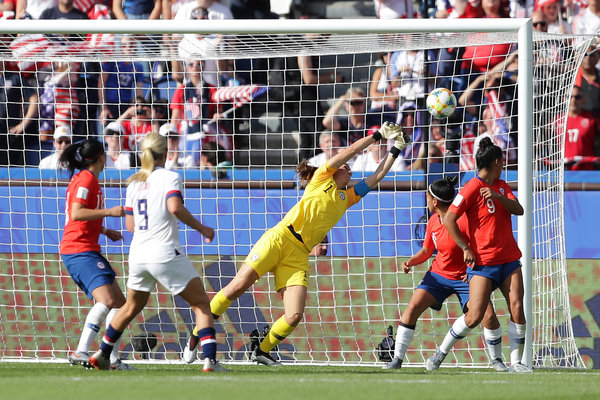 There was the issue, too, of physical freshness. After this game, the Americans would get just three days of rest between each additional game should they advance to the final of the tournament, as they plan and hope to do.

“If you want to go far in the tournament,” Ellis said, “you’ve got to have fresh legs.”

Finally, there was the issue of butterflies. The United States has the oldest average age of any team at the tournament. At the same time, they have a flock of players who are experiencing the emotional highs and lows of this stage for the first time. Early exposure to the atmosphere — against easy opposition like Thailand and Chile — could prove invaluable when the stakes go sky high.

At halftime, for example, Ellis told Jessica McDonald, a 31-year-old forward at her first World Cup, to get warmed up. She would be starting the second half on the field.

“I was shaking,” McDonald said. “I felt sick for a second.”

But then she stepped on the field. Her nerves quieted down. She contributed valuable minutes, almost scored on a spectacular, curling shot that clanged off the far post, and, most important, gave Ellis yet another player who now knew what it felt like to play a match in a packed stadium on the biggest possible platform in their sport.

“All the players, we need them,” Ellis said. “We need them in a good place. And if they can have minutes and the butterflies are kind of out of the way, I think it helps us down the line.”

The team had already been taking this sort of approach in the buildup to the tournament: calling in lots of players, trying out lots of lineups.

In the team’s final tuneup game in the United States before departing for Europe, Ellis sent on six substitutes at halftime, replacing her formidable attacking core with another set of attackers that was almost equally deadly.

“We have two starting lineups,” striker Alex Morgan joked after that game.

Who could have guessed that Ellis would treat the entire World Cup group stage that way? Yet, in a way, she has.

Morgan, who scored five goals on Tuesday, spent the entire game on the bench wearing a fluorescent substitute’s vest. So did Megan Rapinoe and Rose Lavelle and a handful of other star players. Ellis said she was not worried about her normal starters losing any of the rhythm they might have built up already, and Morgan said she did not have an issue with watching from the side.

“When she chooses who goes on during the game and who starts, there’s no explanation needed,” Morgan said about Ellis’s decision. “We trust in her.”

All of this — the depth, the player rotation, the trust — is important because Ellis knows what can happen over the course of a long tournament.

Ellis led the team to a trophy at the last World Cup in 2015, her first as a head coach. But she readily admits now that she was not perfect in her personnel decisions. Players get hurt. They get suspended. She did not know the extent to which she had to be prepared for the unknown.

And so Ellis has a set, first choice lineup, of course. And when the games get harder, as they will as soon as this week, she will lean on those players. But she knows, too, that things — unexpected, potentially bad things — could happen. She could lose a player for any number of reasons. And will her replacement be ready?

On Sunday, she observed more evidence that, yes, they would be.

Andrew Keh is an international correspondent, covering sports from Berlin. He has previously covered Major League Baseball and the N.B.A. and has reported from the World Cup and the Olympics. @andrewkeh