If you are just now turning your attention to college basketball in the aftermath of the Super Bowl and the college football season, you may be shocked at what you find.

The traditional blue bloods Kentucky, Duke, Kansas and North Carolina are struggling, and Monday was the first time in 60 years that none of those men’s basketball teams were ranked in the Associated Press Top 25 Poll. The last poll that didn’t include any of them came out the week of Dec. 18, 1961, when “To Kill a Mockingbird” was one of the best-selling books and “The Dick Van Dyke Show” was the hottest show on TV.

In fact, none of the 13 programs with the most wins in Division I history are currently ranked, a group that also includes Syracuse, U.C.L.A., Notre Dame, Indiana and Arizona.

The poor performances of Kentucky and Duke, which have combined to win 13 N.C.A.A. tournament titles and now rely heavily on one-and-done talent, have garnered most of the headlines. The Wildcats were a ghastly 5-12 after losing to Tennessee on Saturday, while the Blue Devils dropped to 7-7 after falling to their archrival North Carolina on Saturday evening. Kentucky will almost certainly have to win the SEC tournament next month to avoid missing the N.C.A.A. tournament for the first time since 2013, while Duke is on the bubble.

The combination of the big teams’ relative youth and the impact of the pandemic on preparation for the season has led to mounting losses and frustration for coaches, players and fan bases.

Kansas ranks 265th, North Carolina 323rd, Kentucky 341st and Duke 343rd in Division I in experience this season, according to Kenpom.com.

“I’m trying to stay positive,” Kentucky Coach John Calipari said after the Tennessee loss. “I’m trying to hold them accountable. I’m trying to continue to teach. I’m never going to stop, quit on this team. I’ll give them everything I have. But at the end of the day, they have to get on the court and perform.”

Because of the pandemic, the college season was pushed back two weeks, with practices not beginning until Oct. 14 and the season opening on Nov. 25. There were no overseas trips to build team bonding and no preseason games to help determine rotations.

Kentucky may have added the No. 1 recruiting class in the nation and a top transfer, center Olivier Sarr, but even top players need time to learn new teammates and a new system. For a team like Kentucky, which has virtually an entire roster of freshmen and transfers, the pandemic — combined with all the losing — has had a devastating effect.

On Dec. 22, at the end of a loss to North Carolina, the freshman Cam’Ron Fletcher was seen crying on the Kentucky bench. Calipari ultimately asked him to “step away” from the team for a few days.

“You’ve got to accept your position on this team, whatever minutes you get,” Calipari said after the loss to the Tar Heels. “Cam was mad he didn’t play more. And I’m like, ‘The guys in front of you are playing.’

“Cam came in and apologized after, but they don’t understand that with four minutes to go, we have a chance to win the game and you cop an attitude, it’s the immaturity of that.”

Kentucky’s failures have had an impact on the N.B.A. draft stock of some players. The freshmen B.J. Boston and Terrence Clarke entered the season as projected lottery picks, but Boston is now considered a late-first-round pick, while Clarke, who has been injured since late December, has fallen to the second round in some mock drafts.

“The level of frustration among the fan base is the highest it’s been since Calipari has been here,” Matt Jones, a longtime Kentucky radio personality, said. 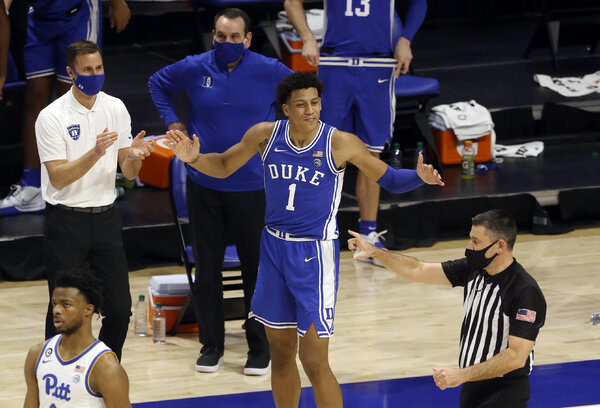 Duke also brought in six freshmen in the nation’s No. 3 recruiting class plus one graduate transfer, and they, too, have struggled.

“I think there’s no question that for those two schools, they have so many first-year players that it’s definitely a factor,” Syracuse Coach Jim Boeheim said Monday on a conference call, referring to the impact of the pandemic. “The summer is important for those programs.”

Duke Coach Mike Krzyzewski has been so frustrated with his team’s results, it has boiled over at times. On Dec. 8, after a 15-point home loss to Illinois, he said that college basketball should “reassess” playing during the pandemic while thousands of Americans were dying each day.

The loss came a week after another home loss to Michigan State. “Let me ask you a question,” Alabama Coach Nate Oats asked a reporter that week. “Do you think Coach K would be saying that if he hadn’t lost those two nonconference games at home?

Let Us Help You Better Understand the Coronavirus

All of Denver's 5 Star Certified restaurants and bars