Home » Sport » ‘The coolest thing I’ve ever done’: Golf still learning to love the Olympics as men tee off in Tokyo

Rory McIlroy during the first round in Kawagoe

You can find Kasumigaseki Country Club on the distant fringes of Tokyo, hidden amongst dense ramshackle housing where rust clings to the railings and paint abandons the walls. The golf course springs up at the end of an unassuming gravel track as grey buildings on either side are replaced by a line of neatly pruned trees.

It is an apt setting for a sport which still looks a little incongruous in the Olympic Games, a still awkward relationship five years on from its reintroduction in Rio. There aren’t many other events where the Olympics is considered an inconvenience by some of its fraternity. “It’s right in the middle of a big stretch of golf for me,” the world No2 Dustin Johnson said when asked to explain why he wouldn’t be playing in Tokyo, as if somehow this wasn’t, you know, golf.

Even the action itself feels a little peripheral. It is a world away from the fury of the pool or the straining sinews of the gymnastics arena. Here Olympic athletes don’t strive for a record time or the perfect routine but to avoid the pitfalls lurking under the mitsu trees, like the giant 9th-hole fairway bunker which swallows up wayward drives or the three-tiered greens designed to frustrate and play tricks on your mind. Golf is a peaceful pursuit and a constant pursuit of peace.

The familiar argument against its inclusion is that the Olympics is not the pinnacle of the sport, and that’s true. As Rory McIlroy explained this week, he grew up dreaming of Green Jackets rather than Olympic golds, partly because it wasn’t an option. But above all, the Olympics should make you feel something: pride, tension, excitement, pain, euphoria. Not every golfer wants to come to the Olympics, but those who do never forget it.

“It was probably the coolest thing I’ve ever done in golf,” said Paul Casey after his round of 67 put him in the chasing pack at -4. “There was a tension out there that is not normal. This just feels very different, everyone here is all in and very aware of what that gold medal means. This might be the only chance I get to win an Olympic gold. I’ll have other chances at majors.” 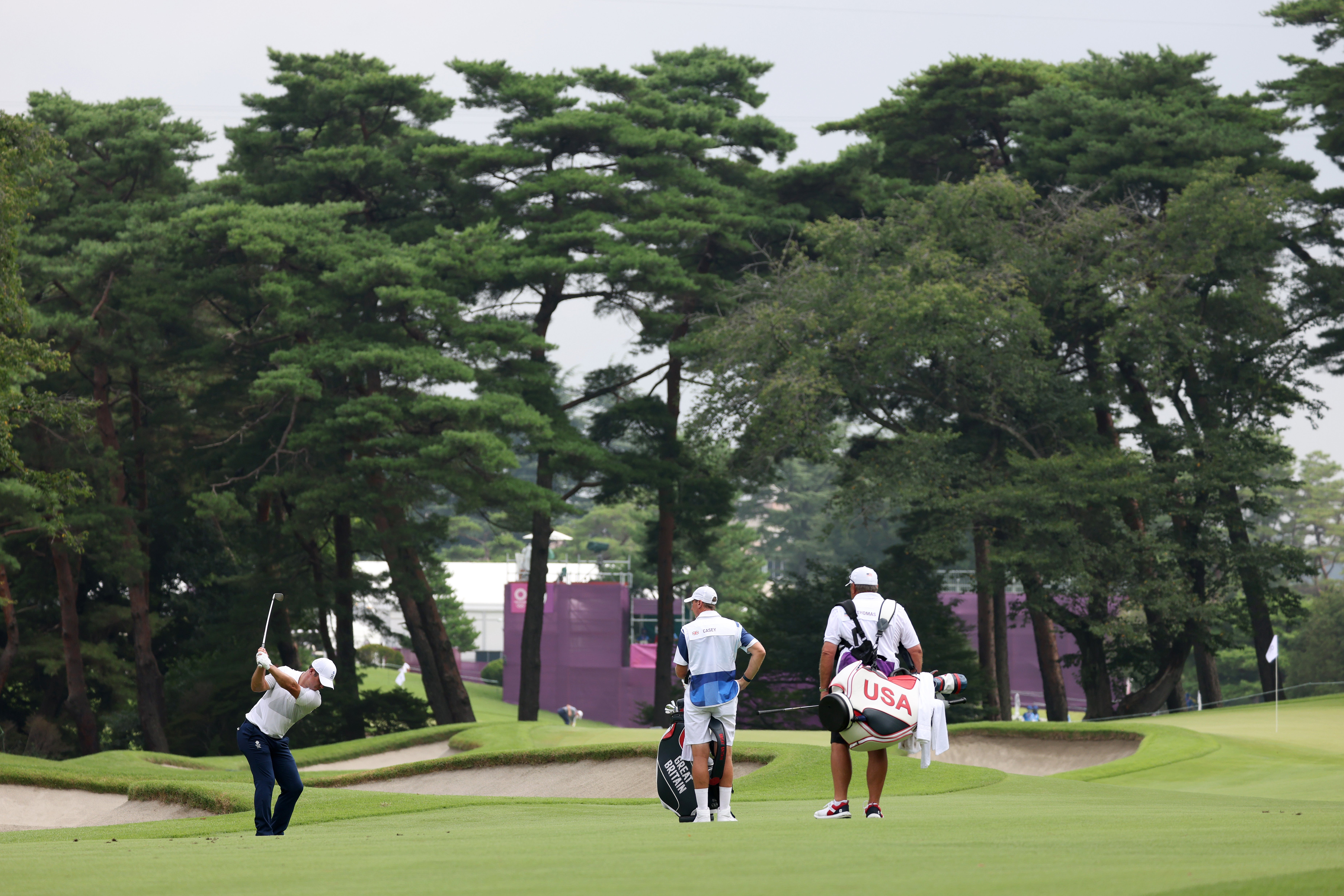 Paul Casey on the second fairway

Others were harder to impress. Rory McIlroy has always been honest about his scepticism, so did it feel any different standing on a first tee adorned with Olympic rings? “Not really, it’s golf,” he said flatly after shooting 69. But even this highly sanitised Games has moved him. “We’re staying in a hotel and the US basketball team are there, we were on the range today and we heard Ireland won gold in rowing. So you’re trying to concentrate on what you’re doing but you’re also really interested in everything else going on and I think that’s the very cool part about it. I think that’s the thing that, maybe not being in the Olympics last time, I didn’t understand. When your sport is in the Olympics you’re all part of something that’s bigger than yourself and your sport. That’s a great thing.”

There were no spectators here and the occasion clearly lacked a partisan crowd which would have filled the stands and got behind Japanese Masters champion Hidecki Matsuyama, who finished in the middle of the 60-man pack on two under par. There were times when it felt like a practice round, like the moment McIlroy and his caddy broke into fits of laughter when his flop shot landed on a sprinkler and bounced six feet into the air.

With no audience beyond a few roaming officials and TV crew, there was no applause when putts fell or groans when drives pulled into the trees. The only thing to disturb the quiet was the crack of a shot and the players themselves. “Niiiiice, really good!” McIlroy shouted as Collin Morikawa’s drive split the 14th fairway like a coconut. After mis-reading a par putt on the 12th green, McIlroy could be heard explaining what happened to his caddy. “It looked so different behind the ball to behind the hole,” he said.

This tournament may be lacking some star names – world No1 Jon Rahm was mystified by a second bout of Covid which ended his participation – but they still put on an intriguing show either side of a break for a passing thunderstorm. Austria’s Sepp Straka went off in the first group at 7.30am and thrived in the slightly cooler conditions with an immaculate round: four birdies on the front nine and four on the back, scoring 63 and a clubhouse leading -8 overnight.

Casey’s -4 was the best of the British duo as Tommy Fleetwood found the water on the last hole, scoring a double bogey to finish on -1. The new Open champion Morikawa matched playing partner McIlroy on -2, while the third member of the headline trio Sungjae Im finished on -1, not the start he required in his bid to win an Olympic medal which would give him a route out of Korean military service. Unsurprisingly, he is a passionate advocate for golf at the Games.

There are three more days to go until Sunday’s final, and Casey in particular has put himself in position to challenge. The 44-year-old shares the same giddy excitement as a teenager at their first Olympics, a reminder of the emotional power the Games holds, the ability to stir its fans and its athletes. Tennis has grown to embrace the Olympics since its reinstatement in 1988, and there is no reason why, over time, golf can’t learn to love too.

“I figured I’d never win a medal in synchronised diving,” Casey joked. “I’m in awe of what these sports do, the ability, talent and athleticism is everywhere. We’ve got bicycles in the village and I’m barely keeping up with these four Aussie lads. I usually go for run at tournaments, but I’ve left my shoes at home, these guys are running at the same pace as me on the bike. This has been an inspiring week, I want to work out more, work harder on the golf course. Seeing the passion that people have for their sports is just really humbling.”