Quinton de Kock’s magnificent 72 off 45 anchored the Southern Brave to a five-wicket win against Northern Superchargers, giving the Brave a victory in the men’s competition after the women had also won earlier, to send fans at the Ageas Bowl home doubly happy.

STORY OF THE MATCH

Dane Vilas hit a much-needed 35 off 24 to help the Superchargers reach 128, but well restricted by spinner Danny Briggs, paceman Tymal Mills and regular wickets falling, their score felt under-par despite the used pitch.

Brydon Carse caught Paul Stirling off his own bowling to break up a robust Brave opening partnership, and the indecipherable Adil Rashid bamboozled James Vince, bowling him through the gate for just eight to become the tournament’s top wicket-taker.

GOODNESS ME! That's a start and a half! 🤯

Adam Lyth goes in the first ball of the innings 👋

Can Brave do a double at their home ground this evening?#SouthernBrave 🟢 #NorthernSuperchargers 🟣

But Proteas skipper de Kock anchored the side brilliantly, batting the entire way through and never really looking like losing his wicket.

His masterful, fluent innings contained nine fours, one maximum, and demonstrated superb control of the game situation despite none of his partners passing 20.

STIRLING EFFORT IN THE FIELD

Irish international Stirling is well known as a stocky, burly opening batsman who uses his power and upper-body strength well to lever the ball around the field.

What was perhaps not so well known was his ability to open the bowling with his rapid off breaks, or his capacity for numerous incredible efforts in the field.

The 30-year-old was throwing himself around with gleeful abandon, saving two with a fine jumping stop by the boundary before diving full-length to his right to snaffle the ball after Raine tried to push a lightning-quick Tymal Mills ball into the off-side.

His all-round game was sharp, agile, and alert and typified the hosts’ switched-on approach in all aspects of the game.

CATCH OF THE MATCH

Davies is a wicketkeeper-batsman by trade. But with the world-class South African captain de Kock in the side, he has given up the gloves in this format and taken to the field.

And the Lancashire man displayed the deft hands of a career ‘keeper twice in the Superchargers’ innings, pouching fine catches from Lynn and John Simpson.

The Australian, one of the most dangerous batters in world cricket, smashed it down to deep cover but Davies was there diving forwards to help take the wicket on Chris Jordan’s first ball.

He also took one going backwards on the boundary to later dismiss Simpson, proving his athleticism and timing outside the wicketkeeper’s usual realm.

Match Hero de Kock said on Sky Sports The Hundred: “As the ball got a bit older it was taking more grip and the pitch got slower. It was difficult but I am glad to get us over the line.

“I don’t think too much about how to pace my innings, it’s more on how the pitch feels and I work out what shots I can and can’t play. 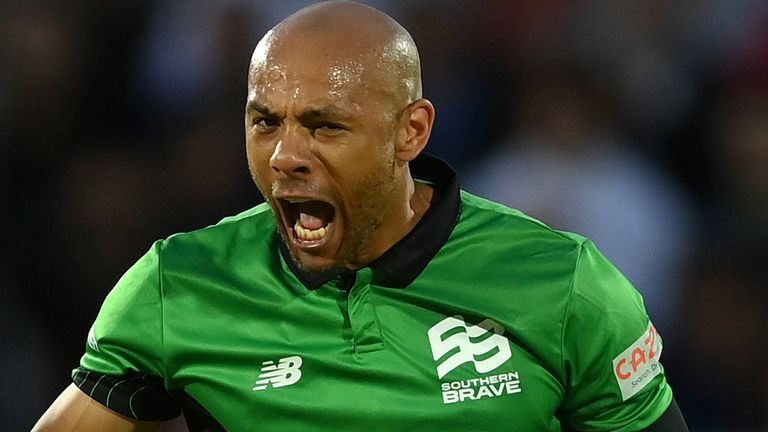 “I think the bowlers did a really good job, especially up front. We thought it was a par score but we didn’t realise how difficult it was to bat on there. Our bowlers have really held us together.

The women’s sides, both in upper mid-table, have won three of their five matches so far, while the visiting Rockets men’s side will look to defend their position at the top of the table.

After that Birmingham Phoenix entertain the Welsh Fire in the women’s and men’s tournament at Edgbaston, with both matches being played on Sky Sports Cricket, Sky Sports Mix and Sky Sports Main Event from 2.30pm and 6pm respectively.

The Phoenix women’s side, bottom of the table, will aim to make up some ground on the Fire, and the Midlands men’s side will hope to improve on their position of third against the second-bottom Welsh side.

Watch The Hundred live on Sky Sports between now and August 21.