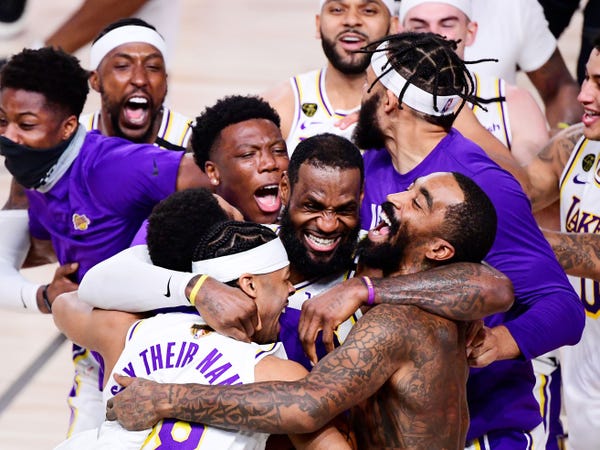 It all began seven months ago to the day — Wednesday, March 11 — when the world shut down.

It's difficult to remember now, but at the time, COVID-19 was still a looming concern rather than the dominating external actor of most of our lives.

But that Wednesday, Utah Jazz center Rudy Gobert tested positive for COVID-19, and the NBA shut down. Everything became real. In the following days, March Madness was canceled, the Kentucky Derby was pushed to the fall, and the 2020 Summer Olympics were pushed back to 2021.

Many of us started working from home. Those who couldn't, were celebrated as the heroes that they were. We all learned how to use Zoom, embraced teleconference happy hours, and started baking sourdough. We watched "The Last Dance" to satiate our need for sports and wondered when things would get back to normal.

Months passed. The NBA bubble was proposed and planned, and then in June, teams from across the league arrived in Orlando, Florida to try and execute a plan that could only be described as "so crazy it just might work." The best athletes in the world all checked in for the highest-profile basketball summer camp in history, scrimmaging on empty courts and spending their off days fishing, streaming, and shot-gunning beers.

It was surreal, but so was everything else.

Then on July 30, the basketball began. On the first night of the NBA restart, LeBron James and the Los Angeles Lakers faced off against the Clippers in what many presumed was a preview of the Western Conference Finals. Anthony carried the Lakers for much of that night, until James burst to life in the fourth quarter, dominating on both ends and tipping in the game-winning bucket.

And with that, the new normal of the NBA bubble was on, and the basketball was good.

Damian Lilliard and the Portland Trail Blazers caught fire to secure a spot in the postseason. Jamal Murray took the leap into superstardom, trading 50-point heavyweight blows with Donovan Mitchell in a series for the ages. Luguentz Dort emerged as the unlikely defense stopper to lock down James Harden. Luka Doncic, OG Anunoby, and Anthony Davis all hit buzzer-beaters that were inconprehensible.

The action wasn't just on the court. The deaths of George Floyd and Breonna Taylor already weighed heavy on the minds of players inside the bubble, with calls for social justice incorporated into their jerseys and their post-game press conferences.

After Jacob Blake was killed by police in Kenosha, Wisconsin, a wildcat strike put the season on hold, with players meeting and working to figure out how best to move forward with their mission. Obama got involved. Eventually, the players returned to the court, but not before demonstrating a level of power that advanced the era of player empowerment further than any one action has since Colin Kaepernick first took a knee.

And the basketball continued. Jimmy Butler led a gritty Miami Heat team through a brawling Eastern Conference, LeBron and the Lakers waltzed through the West, and on Sunday, it was over.

According to commissioner Adam Silver, 6,500 people worked inside NBA bubble to bring the season back to life. Through the entirety of the restart, the league had zero positive COVID-19 cases. The bubble worked.

It's surreal, but so is everything else.