Home » Sport » These 10 Players Could Make or Break Your Bracket

The N.C.A.A. tournament is full of exciting matchups, and these 10 players could lead their teams on a run or upset a bracket. Some are candidates for the John R. Wooden Award, given to the most outstanding player of the season, while others are anchors for their teams. They all promise to be fun to watch.

A two-time Big Ten Player of the Year, Garza is one of the most skilled players in the league. The senior center is a finalist for the Wooden Award and has proved himself as the future of the game. This athletic big man is averaging 23.7 points and 8.8 assists per game while shooting 54.7 percent from the field. He is going to be one of a few versatile big men to watch out for as second-seeded Iowa begins tournament play.

Illinois won its first tournament bid since 2013 and is looking like a force to be reckoned with as a No. 1 seed. Dosunmu, a junior guard, is one of multiple players on this team to watch out for, averaging about five more points per game compared with last season. He has also improved his 3-point shot, now making 38.8 percent of them. As a National Player of the Year contender, Dosunmu has shown consistent improvement since last season and looks as ready as ever to lead a team through the tournament.

Cunningham, a freshman guard, was already getting notice going into the season. He was expected to be a success, and as Big 12 Player of the Year and a Wooden Award finalist, he certainly is one. Cunningham is a reliable player for the Cowboys and his stats prove it — averaging 20.2 points and 6.3 rebounds per game. While his consistency may seem average at times, it is anything but for a first-year player. The team will need him in order to make it past a difficult first-round matchup against Liberty, a strong upset pick. 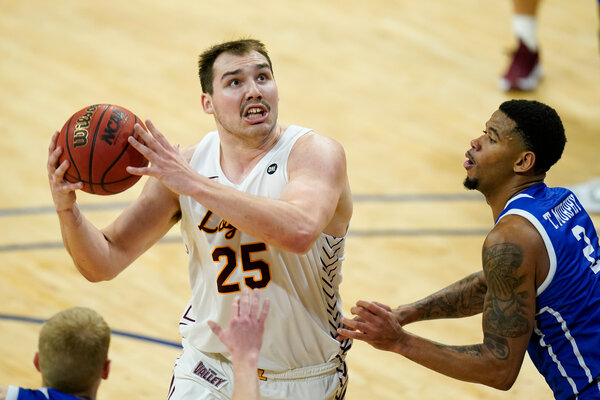 Loyola-Chicago is back for another hopeful tournament. As the only starter left from the 2018 Final Four team, Krutwig is ready to lead the Ramblers as a senior this time. Krutwig, a center, is averaging 15 points per game and is a critical anchor to this season’s team if it wants to make another run. For a big man, he is extremely versatile and is only the fourth player in the Missouri Valley Conference to score at least 1,500 points, 800 rebounds and 300 assists in his career.

This 7-foot-tall sophomore is everything a team could want in a versatile center. Cockburn is tied at second in the league for double-doubles, rounding up 16 so far this season. He is as efficient as a center could be, shooting 65.5 percent from the field. With his improved shooting and dominance in the paint, it is going to be hard for any team to beat the Illini.

Baylor, the No. 1 seed in the South region, wouldn’t have made it there without Butler. The junior point guard has improved a lot from last season, especially when it comes to shooting. Butler is averaging 17.1 points per game, including shooting 42.9 percent from 3-point range. He helped lead Baylor to its first regular-season Big 12 championship title since 1950, and it looks like he’s not going to stop anytime soon.

Moody’s path to the Southeastern Conference Rookie of the Year Award has shown his skills as a leader on both ends of the floor. As a freshman, he has started in all 28 of the Razorbacks’ games this season and averages 33.5 minutes played, the most of anyone on the team. This makes him a dependable piece of an unfolding No. 3-seeded Arkansas team. Expect Moody to play a lot of minutes in what is looking to be a fast-paced matchup between the Razorbacks and Colgate in the first round.

Another skilled center makes his way to the list and this time it is Mobley, a freshman. The 7-foot scorer is a dominant presence on both ends of the floor, especially when it comes to his defensive capabilities. Mobley is a reliable defender at the rim, averaging three blocks per game. He will be of big assistance in the paint and his passing skills do not go unnoticed — he is the big man that every N.B.A. team is scouting for right now.

Grimes has found success with Houston after transferring from Kansas before the 2018-19 season. He has found his place as an efficient guard and has improved his scoring immensely since last season, going from an average of 12.1 to 18 points per game. He is also attempting eight 3-pointers per game and making 40 percent of them. This scoring breakthrough is what makes Grimes so exciting to watch when he is on the court, and he is not absent much, averaging 32.2 minutes per game.

Jones has been an important part of Alabama’s unexpected success this season. The senior guard is a great all-around player and helps the team in more ways than his 11.2 points per game signifies. As the Southeastern Conference Player of the Year, Jones has been a big defensive help, averaging 6.5 rebounds per game — the most of anyone on the team. He is also adding small, but important numbers to the box score, including 1.8 steals and 1.1 blocks per game.