U.S. women's soccer star Megan Rapinoe said she won't visit the White House if the national team defends its World Cup title this summer. Rapinoe, who has been an open critic of President Donald Trump, said visiting the oval office would be a disingenuous gesture.

Rapinoe's stance on a potential White House visit echoes her previous public comments in which the midfielder called herself a "walking protest when it comes to the Trump administration." Rapinoe, an LGBTQ advocate and outspoken political activist off the field, was one of the first athletes to follow former NFL quarterback Colin Kaepernick's lead by kneeling during the national anthem in 2016 — protesting against social injustice. 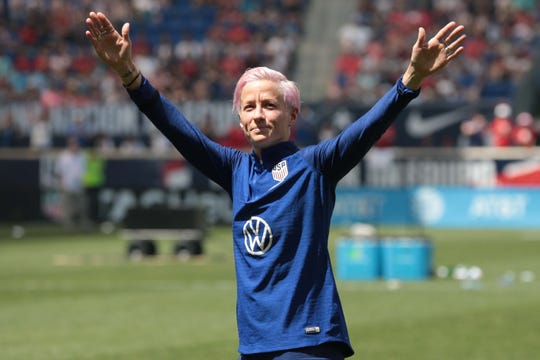 Rapinoe's American teammate, Alex Morgan, also said recently she wouldn't visit the White House, noting that she doesn't "stand for a lot of things the current office stands for."

“We don’t have to be put in this little box," Morgan told Time Magazine. "There’s the narrative that’s been said hundreds of times about any sort of athlete who’s spoken out politically. ‘Stick to sports.’ We’re much more than that."

The decision of whether championship sports teams visit the White House or not under the Trump administration has been an ongoing story line since Trump took office. The two-time NBA champion Golden State Warriors were famously "uninvited" by Trump after players publicly said they wouldn't accept an offer. Since then several sports teams, including the New England Patriots, Pittsburgh Penguins, and Clemson Tigers football team have visited the White House.

Most recently, the Boston Red Sox only had half the team attend the White House visit with Latino and African American players staying home. The Baylor Bears women's basketball team became the first all women's team to visit the White House last month.