Canada’s Toronto Raptors have won their first NBA championship, beating defending champions the Golden State Warriors 114-110 in a Game 6 for the ages and sparking country-wide celebration.

The Raptors victory on Thursday night in Oakland, California, put the finishing touches on a remarkable 4-2 best-of-seven series upset that denied the Warriors a fourth title in five years and marked the first NBA title for a team outside the United States.

When the final buzzer sounded, jubilant Raptors fans flooded the streets of downtown Toronto for a night of celebration not seen in the city since Major League Baseball’s Toronto Blue Jays last won a World Series title in 1993.

Toronto forward Kawhi Leonard, branded the King of the North by Raptors fans after arriving at the franchise in a blockbuster trade with the San Antonio Spurs last July, was named the NBA Finals Most Valuable Player (MVP) after averaging 28.5 points during the series.

‘I wanted to make history’

“Last summer I was going through a lot. I had a great support system, I just kept working hard, working hard and had my mindset on this goal right here,” said Leonard, who missed most of last season with a leg injury.

“I came to a team, a new coach, and that mindset was the same as mine. This is what I play basketball for, this is what I work out for all summer, during the season and I’m happy that my hard work paid off,” he added.

“I wanted to make history here. That’s what I did.”

Leonard is the third player to win Finals MVP with two franchises, joining only Kareem Abdul-Jabbar and LeBron James.

“Without a doubt, the best thing about this thing is that somehow I wound up on the sideline getting to watch this guy play up close,” said Raptors coach Nick Nurse. This is his first season as a head coach in the league. “It’s really cool.” 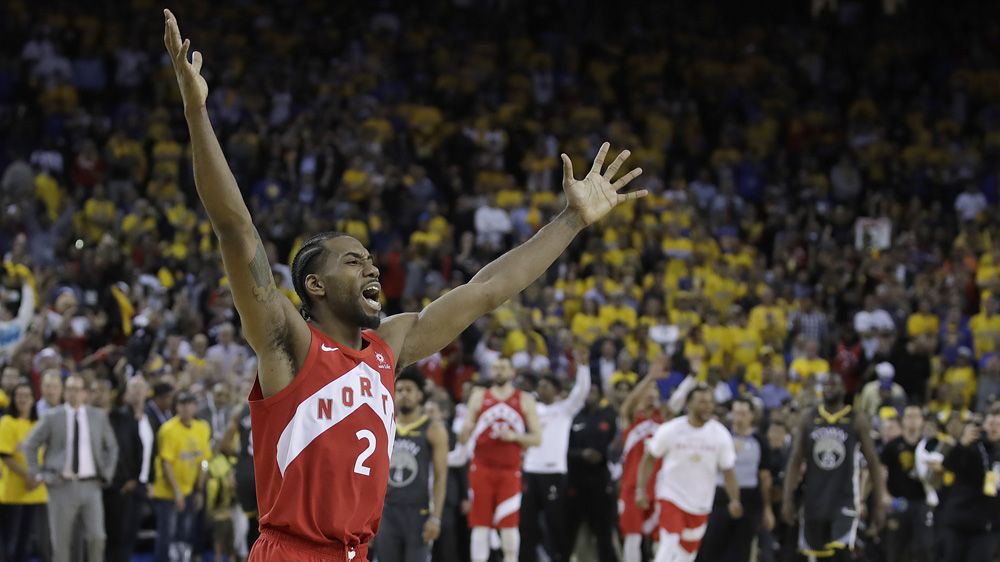 Adding to NBA history, the last five games of the finals series were won by the away team, equalling the record set by Boston-Milwaukee in 1974 and tied by Chicago-Phoenix in 1993.

“We did this off of love,” Drake said after the game. “We willed this into existence.”

For their part, the injury-hit Warriors now face an off season of uncertainty with looming free agency for key players, a move to San Francisco next season and a rising tide of teams that are catching up to their brand of positionless basketball all raising questions over the future of the franchise.

The biggest question surrounds the fate of forward Kevin Durant, who helped lead the team to two championships. Durant ruptured his Achilles in his return to the lineup in Game Five on Monday and coach Steve Kerr on Thursday said he will miss all of next season as he recovers.

Warriors guard Stephen Curry said Thursday did not mark the end of the road for the team, however, which came within a missed three-pointer from forcing a Game Seven in Toronto.

“We’ll be thinking about this one, it’s tough. But with our DNA, who we are and the character that we have on this team, I wouldn’t bet against us being back on this stage next year and going forward,” Curry said.

“So I’m really proud of the way that we fought until the end and this five-year run has been awesome,” he . “But I definitely don’t think it’s over.”