It was the largest margin of victory ever at the World Cup, and it began in the 12th minute.

Alex Morgan scored the first goal in the match between the United States and Thailand, and Rose Lavelle doubled the lead eight minutes later. After it was all over, the defending champion U.S. had the largest margin of victory ever at the World Cup.

The goals came quickly from the United States, one after the other. If you stepped away from the game, chances are you missed a U.S. goal. The Americans scored four goals in one six-minute span early in the second half, and five goals after the 78th minute.

The flurry of goals — the most goals ever scored in a World Cup match — kept many of the 18,591 fans inside the stadium in Reims, France, on their feet.

“For these players, four years now some of them have been working, some of them even longer. I don’t find it my job to go and harness my players and rein them in,” U.S. Coach Jill Ellis said in response to suggestions that her team should have eased up at some point. “This is a world championship.”

The Americans outshot Thailand, 39-2. After the final whistle blew, many of the American players embraced Thailand’s goalkeeper, Sukanya Chor Charoenying, and offered words of encouragement.

Here’s a look at each of those 13 goals, and the celebrations that ensued. 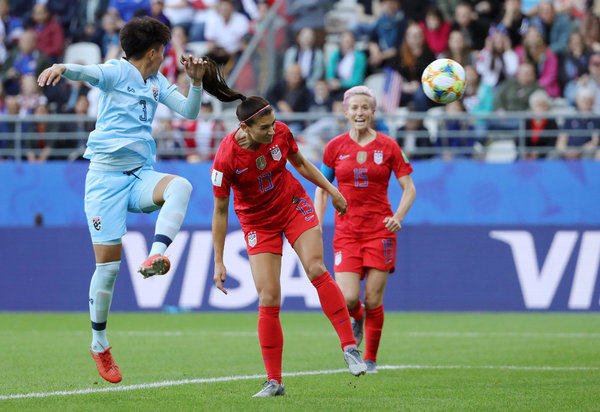