Home » ‘What can you expect from the sons of convicts?’ The rise of Australian sport

In 1984, when interviewing Mike Coward for the position of The Sydney Morning Herald’s chief cricket writer, the newspaper’s editor Eric Beecher said that the Herald’s reputation was “built on politics and cricket”.

The role brought responsibility, Beecher was saying, but also freedom. In newspapers where a journalist’s byline had been a rare privilege, cricket writers had been given a name, a face, and the liberty to express their personality. Indeed, in cricket it was uniquely important to know not just what was written but who was writing it. Since 1946, the paper’s cricket columnist had been Bill “Tiger” O’Reilly, the former leg-spinning great whose attitude to writing was to set down “exactly what my personal reactions were to the events of the day. Not once did I ever spend time racking my brain on what was the nice thing to say or the thoughts I should not let come through on paper.” 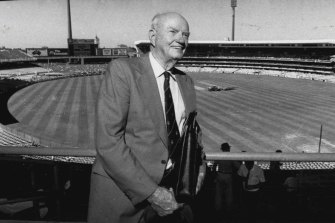 Bill O’Reilly at the SCG upon his retirement.Credit:Paul Matthews

For the Herald, O’Reilly had covered every cricketing event in Sydney from Don Bradman’s hundredth century in 1947-48 through to the simultaneous retirements of Greg Chappell, Dennis Lillee and Rodney Marsh at the SCG in January 1984. As a columnist, Tiger had been paired with tenacious reporters from Tom Goodman to Phil Wilkins, balancing news and opinion while giving cricket their unique signature.

Coward was aware of the lineage he was joining. But something new was also happening. In 1981, he had been at the Age in Melbourne when editor Neil Mitchell launched Australia’s first stand-alone sports liftout, a move soon followed by other newspapers. Mitchell told sports journalists to let their hair down and write with freedom: the coverage should be as much about the spirit of play as the sports covered. The 1980s would see a flowering of the expressiveness of cricket writing into all other sports: the Herald’s sports section in that decade would grant licence to colourful writer-observers such as Peter Roebuck (cricket), Roy Masters (rugby league), Spiro Zavos and Peter FitzSimons (rugby union), Max Presnell and Les Carlyon (racing). They were employed to add their voices to the strong factual reporting provided by the likes of Alan Clarkson, Jim Webster, Norm Tasker and Bert Lillye. A new age of writing about sport was dawning.

Not that expressive or witty sportswriting was new. In 1831, the Herald’s first sports report, covering a Sydney race meeting, described the public in Oscar Wilde-ish style, arriving with “light hearts and heavy pockets” before leaving with “heavy hearts and light pockets”.

The Herald covered sculler Ned Trickett’s progress with passionate enthusiasm from his emergence from the Lane Cove River as a 16-year-old prodigy in 1867 through his world championship win on the Thames over Joseph Sadler a decade later. “A native of this colony,” the Herald wrote, “cannot fail to be regarded with pride by every citizen of NSW [and] rejoice in it as some proof that the Anglo-Saxon race has not deteriorated in physical stamina by translation to the Southern Hemisphere.” 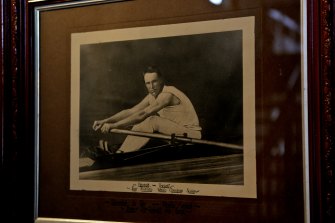 On February 7, 1879, the Herald was on hand to break the news of the first international cricket riot, when the SCG crowd stormed the pitch to protest an umpiring decision in a match between the touring Englishmen and NSW. The Herald reported an England fieldsman saying, “What can you expect from the sons of convicts?” Later, sobering up a little after publishing a letter from one of the umpires in the game, the future prime minister Edmund Barton, the Herald conceded that a decision made by “the worst of umpires is better than having the question of ‘not out’ decided by universal suffrage”.

While Melbourne claimed to be the centre of the sporting world, Sydney shaped Australian sport. In cricket, Sydney was the nursery for the pre-WWI greats Victor Trumper, M.A. Noble, Charlie Macartney and Tibby Cotter, and it was in a Sydney office that Australia’s first cricket “strike” originated, when selectors came to blows before the 1912 tour of England. Sydney was the epicentre of the industrial movement resulting in the split of professionals from amateurs in 1908 that produced the NSW Rugby League. After the war, it was the St George club in Sydney that succoured a young Bowral arrival called Don Bradman; at St George, Bradman would become teammates with Tiger O’Reilly, starting a lifelong love-hate relationship that O’Reilly embroidered, on the pages of the Herald, until his retirement.

Sydney was the stage for many of Bradman’s great innings, including his world record 452 not out for NSW in 1930. No Bradman Sydney epic was as stirring, however, as Stan McCabe’s 187 at the SCG in the first Bodyline Test match of 1932-33. While Bradman sat out the match with illness, McCabe smashed his runs off 233 balls, saying later, “It was really an impulsive, senseless innings, a gamble that should not have been made but came off against all the odds”. 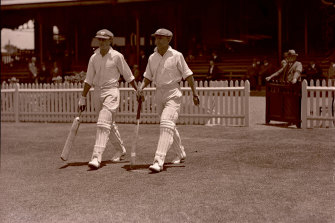 Don Bradman and Stan McCabe going out to bat at the SCG against Queensland in a Sheffield Shield match on January 6, 1930. Bradman made 452.Credit:Fairfax Archives

The 1938 Empire Games gave sports in Sydney a broader international exposure, and it was a year later that the so-called “Bradman of cricket writing”, the Manchester Guardian‘s Neville Cardus, moved to Kings Cross to spend the war years writing for the Herald. Cardus only wrote about music during the war, though he stayed on for one summer after, writing for the Herald on the 1946-47 Ashes series, which began notoriously when Bradman refused to accept the Englishmen’s word for catching him behind the wicket, upon which the England captain Wally Hammond growled at him, “That’s a bloody fine way to start”. 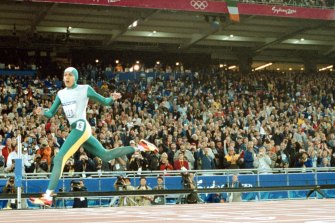 Magnay and Evans were leaders of the Herald’s coverage of the Sydney Olympic Games in 2000, still a high point for Herald sports, when we had writers like Bill Bryson and Tom Keneally sharing our pages with seasoned professionals such as Greg Growden, Mike Cockerill and Mike Cowley, colour writers Tony Stephens and John Huxley, and the newspaper’s world-class photographers and illustrators. By then, sportswriting had gone far beyond the anonymous statement of facts. Sports are meant to be fun, but in the professional era they rarely are. “Sport to many Australians is life and the rest a shadow,” Donald Horne wrote. Sportswriting has filled a gap, providing a reminder that in the theatre of games that enact and seem as important as life and death, there is still a space set aside for play.