Conor McGregor is set to headline U.F.C. 257 against Dustin Poirier, and the Ultimate Fighting Championship and its business partners would prefer that McGregor, the 32-year-old Irish star, stick around this time.

McGregor last fought 53 weeks ago, blowing out Donald Cerrone in 40 seconds and setting up a potential big-money rematch against the lightweight champion, Khabib Nurmagomedov. But then the coronavirus pandemic scrambled those plans. Nurmagomedov defeated Justin Gaethje in October and then retired immediately afterward. McGregor campaigned to return to the octagon but couldn’t line up a bout until a main event against Poirier came together.

But the upside, for the U.F.C., of McGregor’s yearlong absence is that it has been able to sell the fight — scheduled for early Sunday in Abu Dhabi, or Saturday night in the United States — as a comeback. And the U.F.C. is paying McGregor and Poirier as if their main event is a special occasion.

Last year, McGregor earned a $3 million guarantee for blowing out Cerrone, who was guaranteed $200,000. This weekend McGregor (22-4) will earn a minimum $5 million, while Poirier (26-6, 1 no contest) is guaranteed $1 million. Those figures don’t include performance bonuses or the share of pay-per-view revenue headliners typically receive.

But the numbers tell you how seriously the U.F.C. is taking the event — its first for pay-per-view in 2021 — and how much it values the audience McGregor attracts for as long as it can be sustained.

The pay-per-view card sold by ESPN+ in the United States begins at 10 p.m. Eastern, with a preliminary card starting at 8 p.m.

The B-side: He exists.

The focus on McGregor makes it easy to forget Poirier, but it takes two to fight, and his seven-figure guarantee tells you he’s a serious competitor and not just a dummy for McGregor to pummel.

Poirier, 32, has won six of his last eight fights — a stretch that includes one no-contest and wins over top-echelon fighters like Justin Gaethje and the former featherweight champion Max Holloway. Poirier lost to Nurmagomedov, but a lot of fighters do that — including McGregor.

In 2014, Poirier lost to McGregor, then a rising U.F.C. star, by first-round knockout. And in 2011, Poirier was featured in “Fightville,” a documentary examining the mixed martial arts community in Lafayette, La. 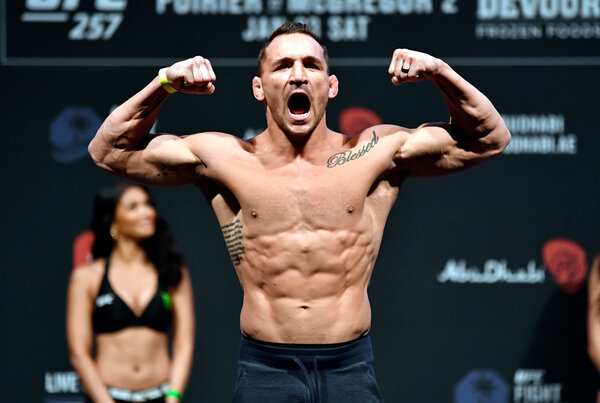 The lightweight contender Michael Chandler will make his U.F.C. debut when he faces New Zealand’s Dan Hooker in Saturday’s other main event, but he’s not a rookie. Chandler has a 21-5 record and a reputation as a skilled wrestler and a versatile mixed martial arts fighter.

Last year, he signed with the U.F.C. after a decade with the rival promoter Bellator. In October, he served as an understudy for the main event between Nurmagomedov and Gaethje. He trained as if he were going to fight and even weighed in at the 155-pound lightweight limit, so he could fill in immediately if some last-minute catastrophe sidelined either headliner.

This is a tournament.

It might help to think of the two fights atop U.F.C. 257 as a playoff bracket, with Chandler and Hooker on one side and McGregor and Poirier on the other. Chandler’s value, after all, is that if he wins impressively, he provides another high-stakes option for McGregor later this year, provided that McGregor wins as well.

That matchup, of course, isn’t guaranteed. A year ago, U.F.C.’s president, Dana White, spoke openly of matching McGregor and Nurmagomedov in a football stadium. One year, one pandemic and one retirement later, it appears that a rematch might never happen. So right now, McGregor-Chandler looks like the medium-term goal.