Home » Sport » When Golf Is Nothing but Rough

PEBBLE BEACH, Calif. — Struggling golfers are like characters out of “The Emperor’s New Clothes,’’ the famous Hans Christian Andersen tale. They spin fine narratives full of pleasing patterns — even if, in reality, there is nothing to see.

Thus, after a round with multiple three-putts, a player will talk about all the good reads that went unrewarded. An erratic driver of the ball will laud his swing.

This relentless positivity in the face of failure was recently remarked upon by the retired football star Peyton Manning. After playing a pro-am round with Tiger Woods last month, Manning, a two-time Super Bowl-winning quarterback, said, tongue in cheek: “I always wanted to do a football news conference the similar way a golfer does: ‘I had a great stretch today, I got all my handoffs, I got every snap. I threw four interceptions, but for the most part I’m excited about my game and looking forward to next week.’”

Still, don’t be fooled by all the happy talk, said the one-time PGA Tour winner Jason Gore, who is at this week’s United States Open in his new role as the U.S.G.A.’s Senior Director of Player Relations.

“That’s our defense mechanism,” Gore said. “We can’t let our guards down because if we did we’d be flooded with negative thoughts.”

Those thoughts come with the terrain in a game where a good round, as defined by one of the sport’s all-time greats, Ben Hogan, is hitting three shots that turned out exactly as visualized. Gore said disappointment is a golfer’s faithful companion and that the man in the mirror is every PGA Tour player’s biggest nemesis.

“You’re dealing with failure a lot,” he said.

Consider Jordan Spieth, who collected 11 tour titles, including three majors, before his 24th birthday, and is winless in the two years since. Spieth, the 2015 U.S. Open champion, recently explained away his victory drought as “a matter of perfecting swing adjustments” and bristled at the use of the present tense to describe his slump.

“Was” corrected Spieth. He was speaking before his opening round at last month’s P.G.A. Championship, where he recorded his first top-20 finish of the 2018-19 season. 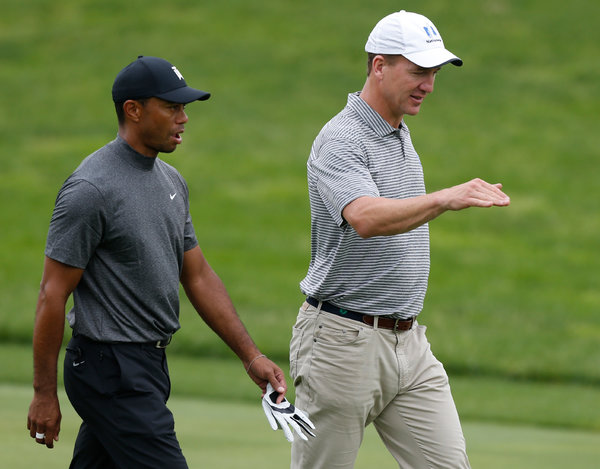 Spieth, 25, took the negativity that has crept into critiques of his performance and tried to spin it into a positive. If not for his earlier success, people would be remarking on his improved swing or his maturation, he said, “instead of the comparisons constantly to when someone is at their best, which I think is unfair to anybody in any field.”

Not every slumping golfer is like Spieth, who, at his best, was the world’s No. 1, making his fall into something of a spectacle. Some golfers, like Max Homa, 28, are on the periphery of the spotlight and when they struggle they virtually disappear. During the 2016-17 season, when Spieth was stringing together three victories, including the British Open, Homa was surviving just two cuts in 17 starts.

As his failures piled up, Homa took to practicing at the far end of the range on tournament weeks, away from the player-caddie foot traffic. “I was maybe trying to alienate myself a little more so I wouldn’t have to be around people and talk about how I was playing,” said Homa, who recorded his first tour victory last month in Charlotte, N.C.

He also tried to dodge invitations from friends on the tour to play practice rounds, settling for his own company whenever possible.

“It’s one thing to hit a bad shot by yourself,” Homa explained, “but hitting one in front of other people makes you think about it a little more and the embarrassment level deepens.”

After a while, Homa found that isolating himself from his peers came easy. “I was rarely in a good mood,” he said, “so people left me alone.”

Keegan Bradley, who ended a six-year winless drought last September with his fourth tour victory, said he tried to remain even-keeled throughout it all. But unlike Homa, he said he didn’t have to go out of his way to avoid his peers. People seemed hesitant to approach him on the range, anyway.

“I think that there’s an aspect where people think that you’re feeling a lot worse than you are and they don’t know what to say,” he said.

So why do winners generally draw a crowd while underachievers toil alone?

“It’s kind of like you don’t want to catch whatever they have,” Gore said.

Indeed, hooked drives may not spread like the measles, but that doesn’t mean other players can’t become infected. Dr. Lee Land, an Austin-based psychologist with a private practice, said: “Even discussing a period of subpar play or spending time around others in a slump might for some athletes trigger an emotional fear of contamination by association.”

Homa, meanwhile, said it was the realization that all athletes experience highs and lows that “got me through in the end.’’

“Everybody hits bad shots so stop freaking out about it,’’ he added.

But it is not that easy for golfers to do what Homa ultimately did and face up to the truth. Instead, the potential for embarrassment, shame and rejection prevents at least some of them from acknowledging their distress. That probably explains some of the relentless positive spin.

And in doing all that spin, the slumping golfers may be compounding their discomfort, because in denying their struggles and disconnecting from others they become more susceptible to the emotions they are striving to avoid.

“Although in our culture vulnerability is often viewed as a sign of weakness,” Land said in an email exchange, “the ability to share emotional openness with others can help us develop resilience in the face of overwhelming stressors.”

In the end, though, dealing with a slump is harrowing, no matter what techniques a golfer tries or ignores, no matter what advice he is willing to accept. And particularly when it’s a high-profile golfer like Spieth.

After all, how can a player escape a slump when he’s constantly being asked to revisit it?

“Clearly with Jordan it’s got to get in his head,” said Ireland’s Padraig Harrington, who went seven years without a tour victory after winning his third major. “People will ask the question. He’ll answer it. It’s difficult.”

Before the P.G.A. Championship, Spieth was asked if he noticed players reacting to him differently in defeat than when he was consistently winning. He didn’t wait for the reporter to finish. “No, I mean, I didn’t like go away from the game for five years,” Spieth interjected. “I just happened to not win in the last year and a half or so.’’

Then he doubled down. “I don’t feel that way at all,” Spieth said. “I’ve had friends on tour reach out and say, ‘Hey, everyone goes through ups and downs — stick to it, you’re doing the right things, whatever.’’’

He was speaking slump-ese, or at least one dialect of it.