Home » Sport » WWE top 10 PPV events ever with The Rock vs Lesnar, and The Undertaker against Triple H

THE success of WWE’s pay-per-view business has made it must-watch viewing for decades.

It started with just one – WrestleMania – and since then, the WWE has produced PPV greats such as the Royal Rumble and SummerSlam. 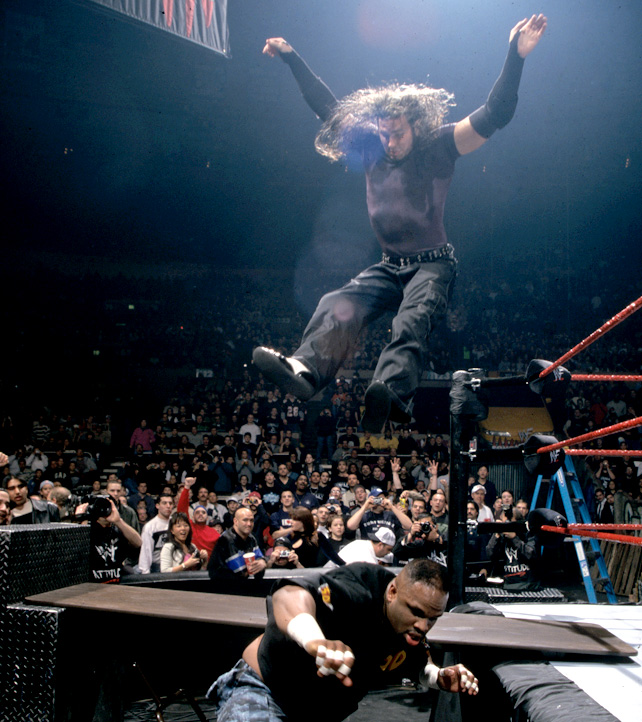 This is our list of the top 10 WWE PPV events.

For wrestling fans, once the New Year comes around, the focus switches to WWE’s annual Royal Rumble PPV – and 2001 was one of the best.

The title match was packed with star power, with the focus on Kane, Undertaker, The Rock, Rikishi and Stone Cold Steve Austin

It was the night that Kane would eliminate 11 superstars from the match, but fall short of winning the match. 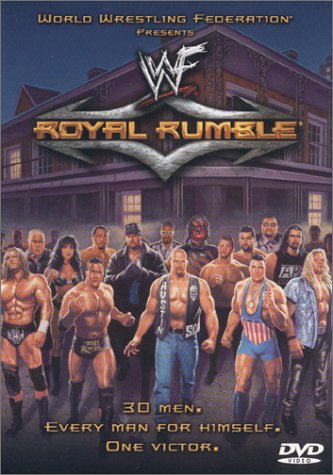 The undercard was just as star studded as the Dudley Boys faced-off against Edge and Christian (c) for the WWE tag-team titles to open the event, while Team 3D were crowned new champions.

Then there was the co-main event WWE title match between Kurt Angle (c) and Triple H, in which Stone Cold would cost The Game the match and help Angle retain.

The Money in the Bank PPV in 2011 centered around one match in particular – the main-event between CM Punk and John Cena (c) for the WWE title.

The event was held in Punk’s hometown of Chicago, which gave the native the home field advantage as fans in attendance held up signs that read “If Cena wins, we riot.” 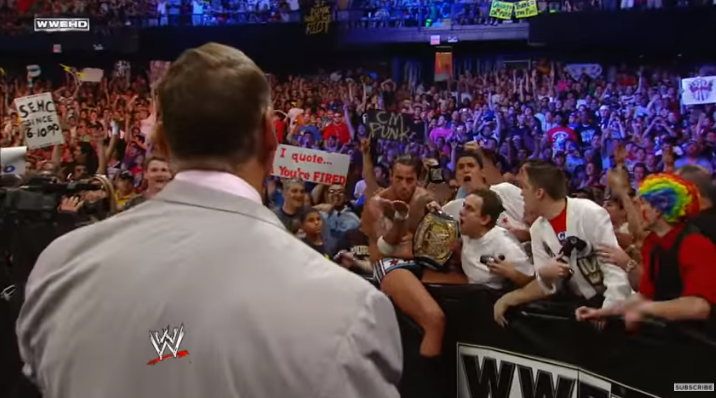 Punk’s WWE contract was legitimately set to expire at midnight, setting up a heated feud between the two.

Aside from the main event, the show featured two Money in the Bank Ladder Matches for superstars in both the Raw and Smackdown brands.

Daniel Bryan would win the Smackdown Money in the Bank briefcase, while Alberto Del Rio took home the Raw briefcase.

On the other hand, Randy Orton (c) defended his World Heavyweight title against Christian with a stipulation in place, that if Orton were to get disqualified or if there was poor officiating he would lose the title.

The 20th anniversary of WrestleMania was held in New York City’s Madison Square Garden, the home of the very first WrestleMania in 1985.

The show was stacked with star studded matches like Christian vs. Chris Jericho, Goldberg vs. Brock Lesnar and the revival of the Undertaker’s famous Deadman persona.

The Rock n Sock connection reunited at ‘Mania XX, as The Rock and Mick Foley teamed up in a 2-on-3 handicap match against Evolution’s Batista, Ric Flair and Randy Orton. 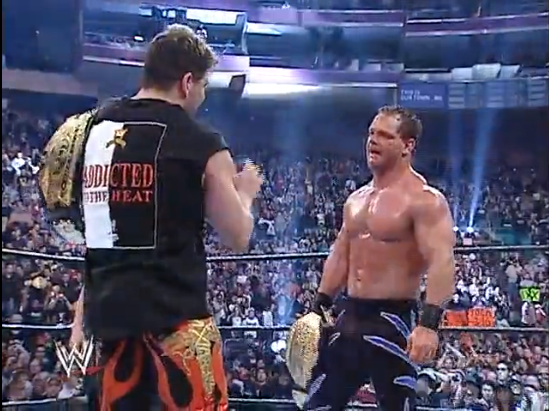 For The Rock, it would be his final match with the WWE as he shifted his attention full-time to his Hollywood career.

The event featured two main events for both the WWE title and World Heavyweight title.

Eddie Guerrero (c) would lie, cheat, and steal a victory from Kurt Angle with a sweet little roll-up.

After 19 years in the wrestling business, Benoit captured his first world title and celebrated with his best friend Guerrero to end the show in an emotional moment.

In 2000, the focus of the Fully Loaded PPV was the triple main event.

But before fans got to the main events, Rikishi and Val Venis battled in a Steel Cage match where Rikishi hit a cross body on Venis off the top of the cage.

The tag-team titles were also defended as The APA faced Edge and Christian (c).

In the first main event, Taker came out victorious against Angle in a hard-fought contest.

The Last Man Standing Match was a spectacular bout, as The Game picked up the win against Y2J.

The headliner between The Rock and Benoit was a slug fest, as Benoit had Shane McMahon in his corner. 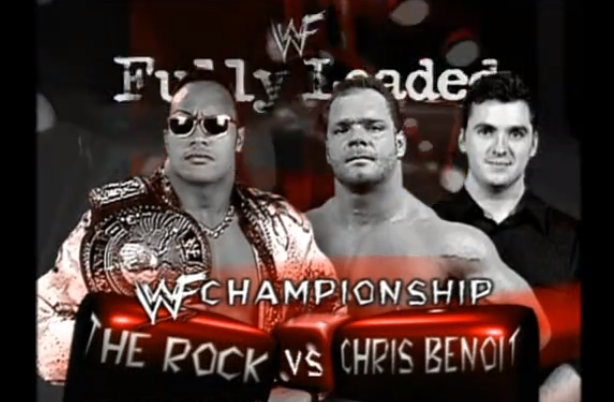 At one point, it seemed as if Benoit had won the title – but the match was restarted by commissioner Mick Foley.

The Rock ultimately came out on top despite multiple interferences by Shane O’Mac.

Not only did this show feature the second Ladder match in the company, but it also showcased the best opening match in the history of the WWE.

Bret Hart would open the event by fighting his brother Owen Hart.

Owen had turned on Bret and was looking to be the better brother while Bret was ready to battle. 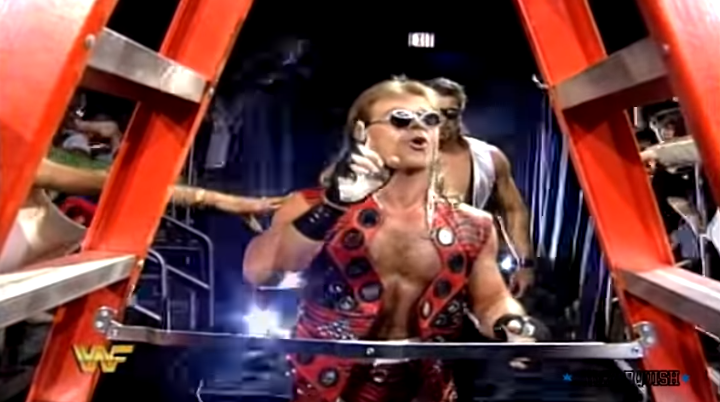 After 20 minutes of gripping action, Owen would prevail with a roll-over pin fall victory. However, Bret had a second match later in the show against WWE champ Yokozuna.

The co-main event was the Shawn Michaels vs. Razor Ramon Ladder match, a stipulation the WWE universe witnessed two years prior to the event which made it all the more exciting. 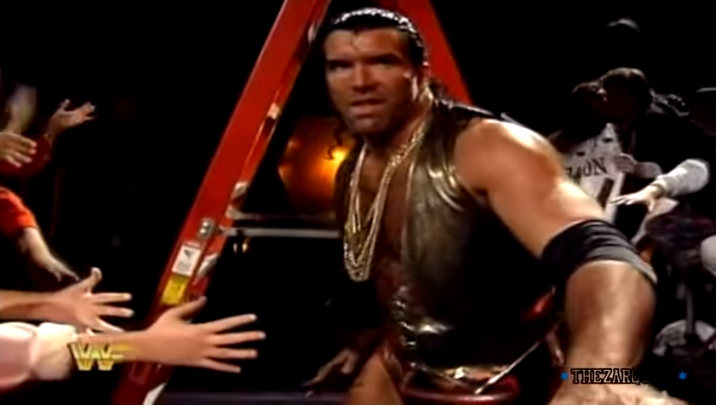 Ramon would retain his Intercontinental title after one of Michael’s legs got stuck in-between the ropes allowing Ramon to climb up and bring down the gold.

Despite the loss to his brother early in the show, Bret would overcome the 589lb champ Yokozuna to cap off the night as champion.

This was the only major WWE PPV that was held outside of the United States.

In 1992, SummerSlam was held in England, where hometown hero British Bulldog starred in the main event as he faced Bret Hart for the Intercontinental championship. 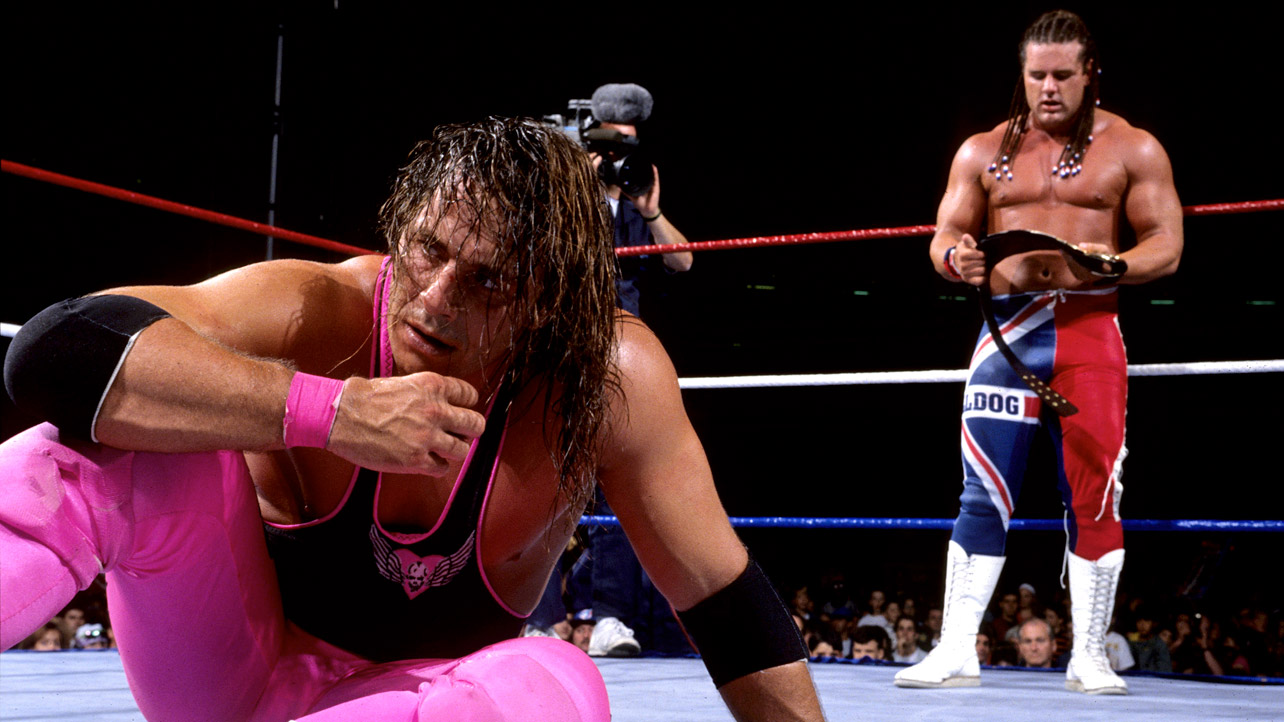 In front of 80,000 UK fans, the British Bulldog was able to defeat Hart to capture the title in one of the best Intercontinental matches of all-time.

These two matches alone were enough to make a great show in front of the 80,000 people in Wembley Stadium.

The 2000 Royal Rumble event was the sight of one of the greatest matches in WWE – the Street Fight between Triple H and Cactus Jack.

The match featured barbwire, thousands of thumbtacks and tons of blood from both superstars. 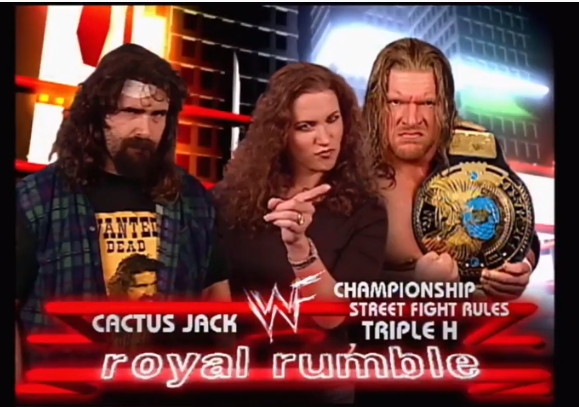 The shot of the night came when Triple H hit Cactus Jack with a Pedigree onto thousands of thumbtacks.

The overall contest was amazing; it was the match that transformed Triple H into a The Game and into one of the company’s top wrestlers.

The opening of the show saw the debut of Tazz, as the raucous crowd in Madison Square Garden showed their appreciation to the Brooklyn native.

The MSG crowd witnessed a glorious tables match between The Dudley Boyz and the Hardy Boyz, who went through 10 tables in 10 minutes. 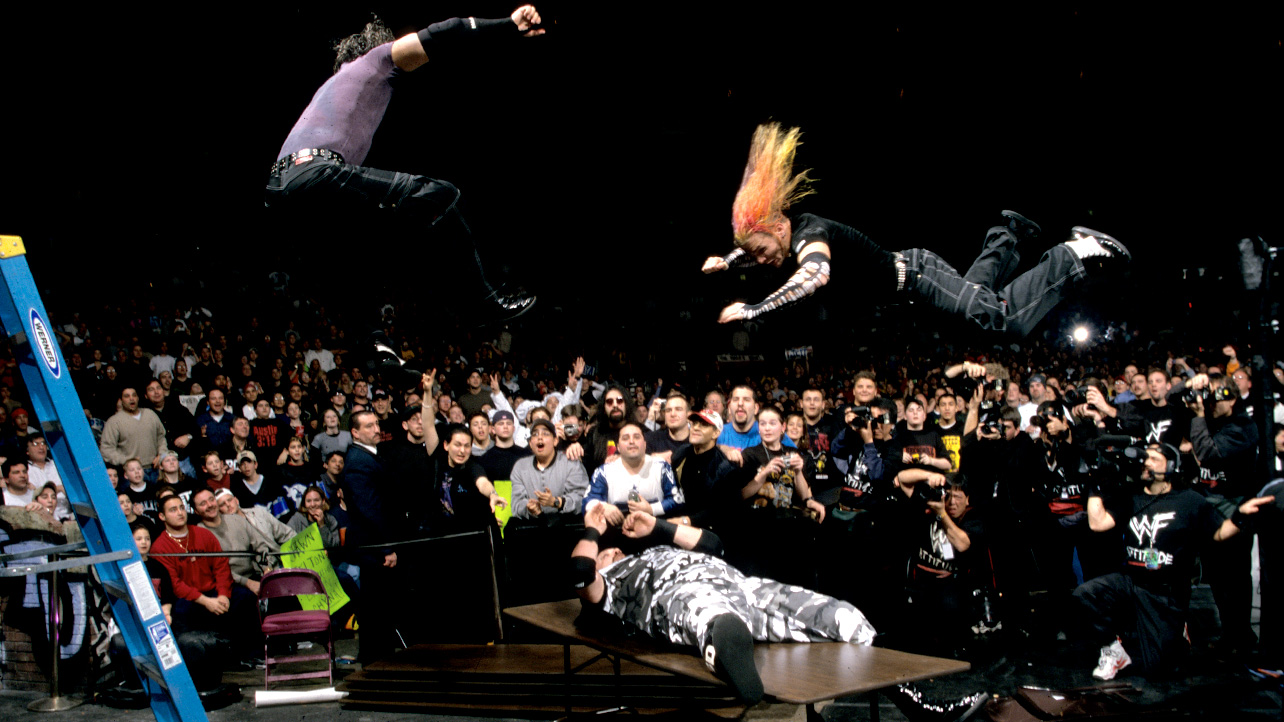 The Rumble match was won by The Rock, who eliminated the Big Show last as they both went over the top rope at the same time, but the People’s Champ hung on to win the match.

For years, the No Way Out event was the bridge between the Royal Rumble and WrestleMania. While it was just used as a stepping stone, the 2001 edition delivered one of the best shows of the decade.

The highlight of the show was a brutal Three Stages of Hell match between Triple H and Stone Cold. 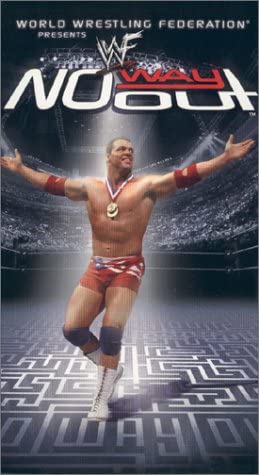 Some 45 minutes of aggression ensued between the two, who had no love lost for the entire year prior.

The ending was perfect, as Triple H got the win by falling onto Austin as both men laid in the center of the ring unconscious.

Another gem was the main event of the night, where The Rock won the WWE title from Kurt Angle, setting up the WrestleMania X-Seven battle against Stone Cold.

Other matches on the card were an excellent Fatal Four-Way for the Intercontinental title and even a Triple-Threat Tables tag-team match for the tag-titles.

Every single match on this show was solid. The crowd was psyched, a legend returned and a torch was passed.

The opening match between Kurt Angle and Rey Mysterio was a talented bout to kick off the show. 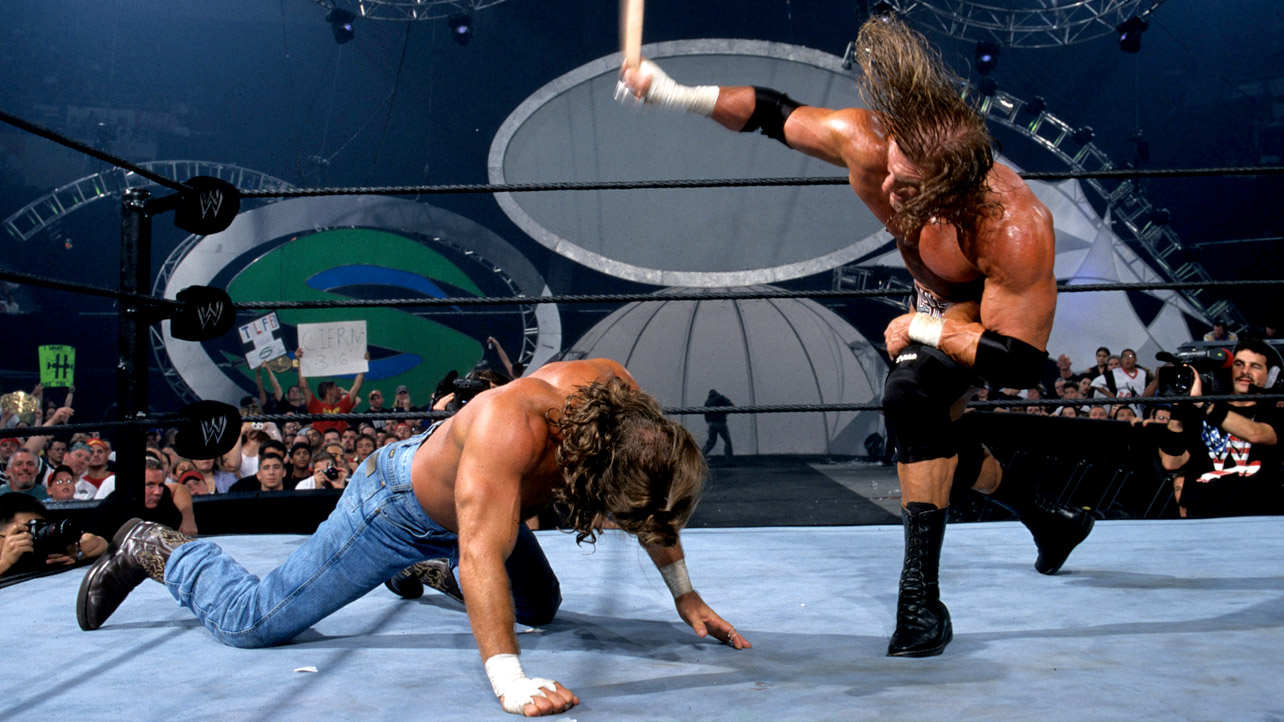 There was a Ric Flair and Chris Jericho match, Edge vs. Eddie Guerrero and RVD vs. Chris Benoit.

The event featured the in-ring return of Shawn Michaels – and the Heartbreak Kid delivered.

The storyline leading up to the Michaels and Triple H Street Fight had fans sold, and it helped The Game get even more heat from spectators when he attacked HBK with the sledgehammer after Michael’s win.

Last up was the passing of the torch between The Rock and Brock Lesnar. 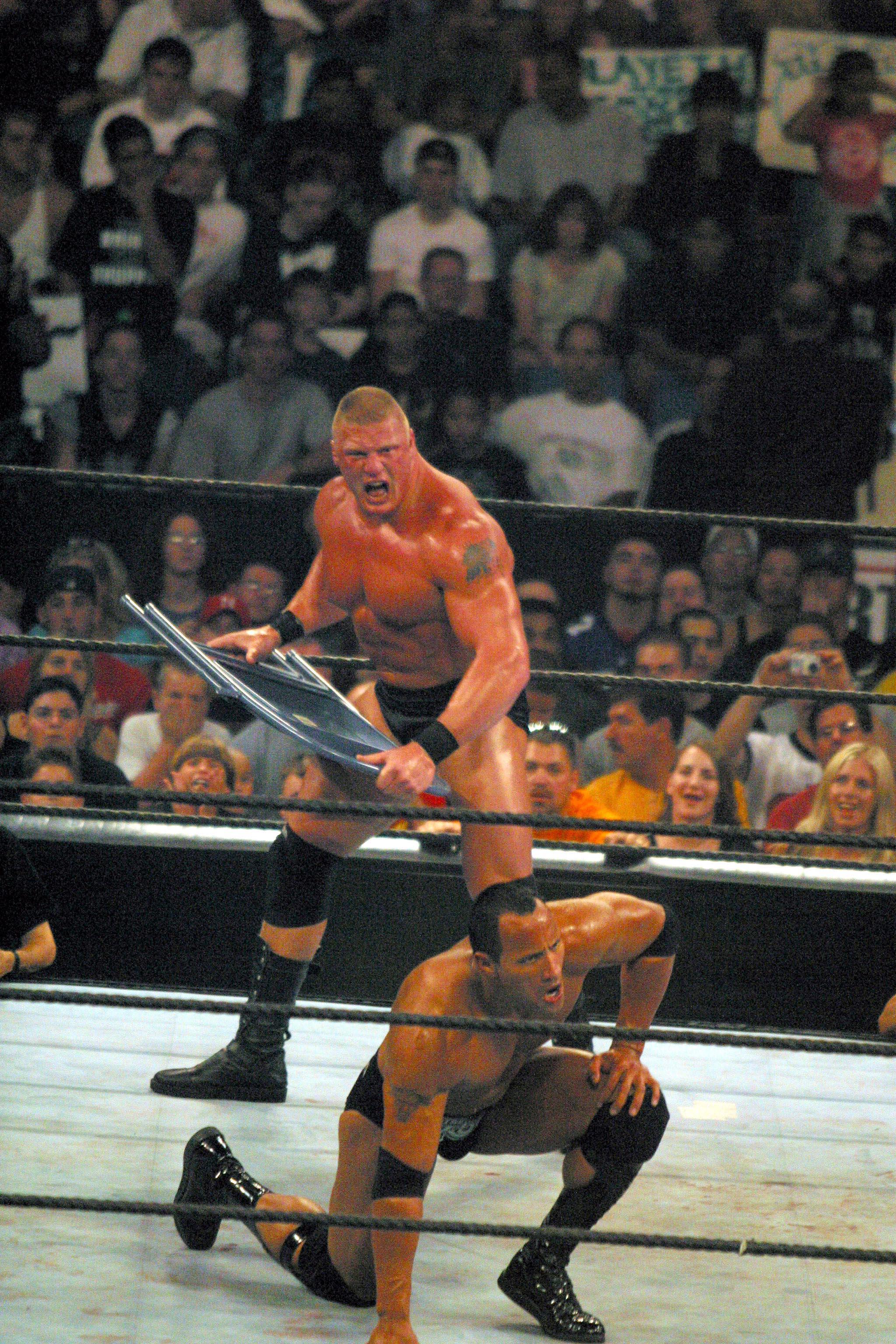 Lesnar, who was technically the bad guy coming into the contest was beloved by the fans, while The Rock was another fan favorite.

The match went the distance, as The People’s Champ gave Lesnar all he could handle, but in the end, Lesnar was just too much and the young star got his big moment capturing the WWE title.

WrestleMania X-Seven was the high point of the WWE, capped off with the best PPV from the company in more than two decades.

The main event of The Rock and Stone Cold has been in the making for a long time and it was the match everyone wanted to see. 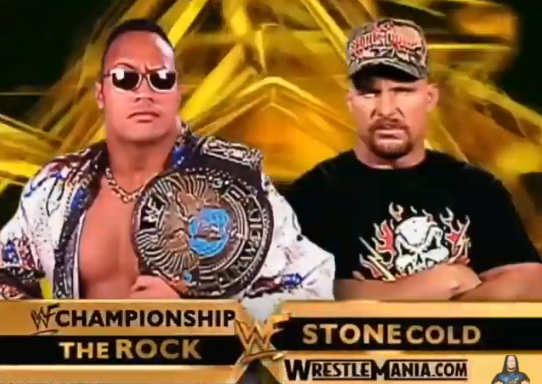 It was rare that two legends of the business were in their prime at the exact same time, but fans got to witness both stars battle it out in their best match against each other.

An unexpected match was the second installment of Tables, Ladders and Chairs between the Hardy’s, Dudley’s and Edge and Christian.

No one could’ve suspected that the second TLC match would have been better than the first.

The match descended into what was effectively a nine-person tag-team match with Lita, Spike, Dudley and Rhyno getting involved in the mayhem.

The event was also the first encounter between the Undertaker and Triple H, which resulted in an all-out brawl.

Kurt Angle and Chris Benoit put on a wrestling clinic.

Father and son, Vince and Shane McMahon, made it a family affair with a stunning performance that even saw appearances from Linda and Stepahnie.

Even the hardcore match with Kane, Big Show and Raven was an entertaining contest.

WrestleMania X-Seven was by far the WWE’s greatest PPV event to date.