Ratings: ‘Ghosts’ Premiere Scares Up the Most Viewers for a New Comedy This Fall

“Live” TV tune-in only provides a fractional snapshot of how a program performs these days, and delayed viewing makes its way to us in spurts — so it is only right that we reevaluate Premiere Week 2021 now that one week of (mostly) DVR catch-up is available for every single primetime show that aired between Monday, Sept. 21 and Sunday, Sept. 26.

Below, we’ve mapped out the 21 highest-rated and most-watched broadcast shows of Nielsen’s Fall TV Premiere Week. We excluded sports programming, as NFL domination would have merely booted a bunch of well-performing scripted and unscripted series off our tables. Plus, sports are pretty much totally consumed live, so a delayed-viewing story heavy on the professional pigskin doesn’t really demonstrate anything.

We did leave in news programming, though really that just means we let “60 Minutes” take its rightful place on our “most-watched” list.

Even with a format that rewards “live” viewership — unless you’re somehow able to avoid spoilers — “The Masked Singer’s” Season 6 debut on Wednesday was still the highest-rated series of the week among adults 18-49, according to Nielsen’s Live + 7 Day numbers. A second part on Thursday ranked fourth on our list.

CBS’ “Survivor” and NBC’s “Chicago P.D.” split the two “Masked Singer” episodes up. Fox’s “9-1-1” rounded out the Top 5. That was followed by four-straight NBC shows — two “The Voice” episodes, “Chicago Fire” and “Law & Order: SVU” — and Fox’s “The Simpsons,” which enjoyed a strong NFL lead-in.

See the Top 21, which includes one tie, below. Had we included primetime sports programming, seven of the Top 8 slots would have gone to NFL football programming. 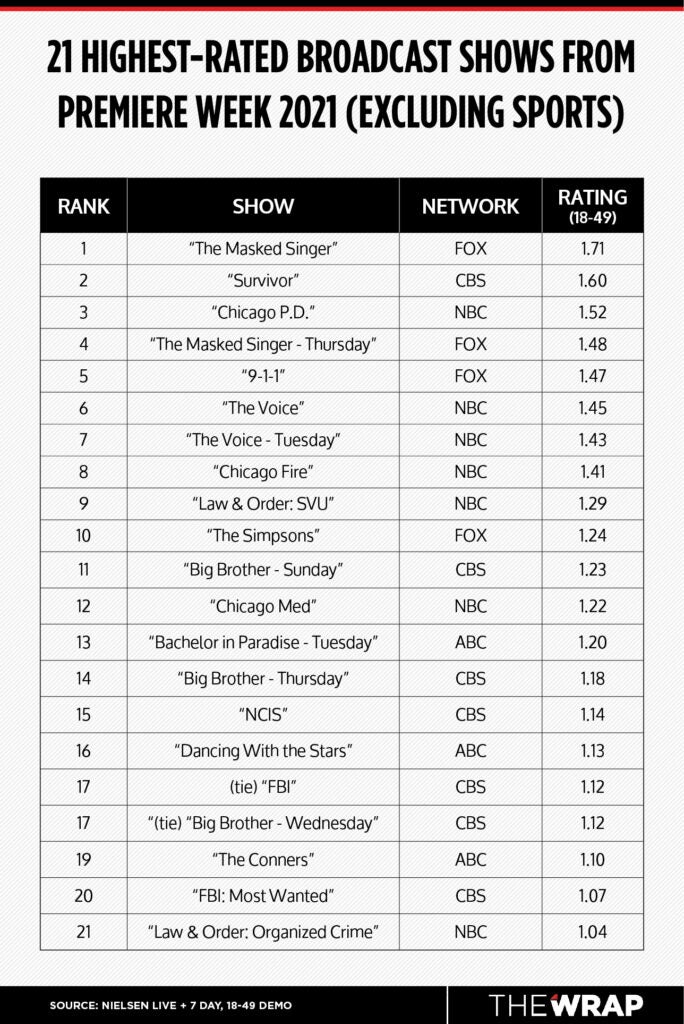 In terms of overall viewers, “The Masked Singer” episodes settled for 16th and 21st, respectively. That means the show is popular among younger adults, not older ones.

CBS’ “NCIS” drew the most viewers overall during Premiere Week. The network’s “FBI” finished second. Those two shows, plus “Chicago Fire,” “FBI: Most Wanted” and “Chicago P.D.,” were the only non-sports shows to top 10 million total viewers. “NCIS” pretty comfortably pulled that feat off.

Rounding out the Top 10, each with more than 9 million viewers but fewer than 10 million, are: “NCIS: Hawai’i,” “Chicago Med,” FBI: International” and the two episodes of “The Voice.”

So yeah, all 10 of those shows are quite popular among older Americans.

“NCIS: Hawai’i” and “FBI: International” are the only freshman series to make either of our Top 21 lists. What can we say? Old people love CBS procedurals — and their spinoffs.

See that Top 21 below. Had we included primetime sports programming, three of the Top 4 slots and six of the Top 20 would have gone to NFL football programming. 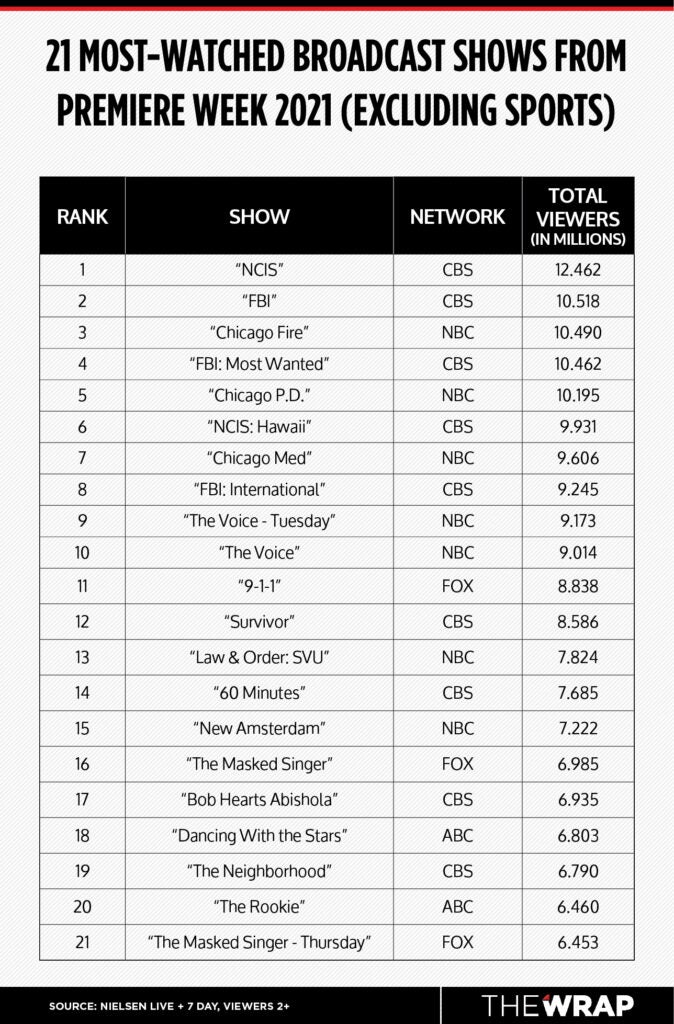