Bob Grandin has a vivid memory of flying a helicopter to resupply ammunition to besieged Australian troops during one of the decisive battles of the Vietnam War.

"It was terrifying," he says. "I thought it was a suicide mission." 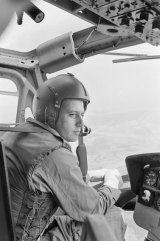 Flight Lieutenant Bob Grandin at the controls of an RAAF Iroquois helicopter while flying the run from the Australian Army at Task Force Headquarters at Nui Dat to the Vung Tau airfield during the Vietnam War. Credit:Australian War Memorial

Then Flight Lieutenant Grandin was a 25-year-old who had just arrived in Vietnam. He'd started that day flying Little Pattie and Col Joye into the base for a concert for the troops in August 1966.

When the Battle of Long Tan broke out in a rubber plantation four kilometres away, the entertainers had to be evacuated and two helicopters became crucial to the survival of just over 100 Australian and New Zealand troops fighting more than 2000 enemy soldiers.

"We filled two helicopters with ammunition boxes," Dr Grandin says. "We took off and went straight into a tropical thunderstorm and meandered around trying to find them."

With no visibility through the front window, when a road appeared below through the perspex window between his feet he realised they were behind enemy lines.

"We had to come back, find them, drop the ammunition down and go away. Then we went back at midnight to collect bodies and wounded soldiers."

Dr Grandin, now 79, was reflecting on the battle ahead of the first public screening of Danger Close: The Battle of Long Tan at the Sydney Film Festival on Saturday.

Directed by Kriv Stenders (Red Dog), it is a visceral drama about an intense battle that is recognised as an historic Australian military victory, even if political embarrassment about the Vietnam War has left it largely forgotten. 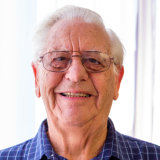 A self-described compulsive student with eight degrees and two doctorates who still volunteers to support veterans' mental health, Dr Grandin wrote the book The Battle of Long Tan: As Told By The Commanders that inspired first a documentary and now the film.

At a private screening with fellow veterans, he found the helicopter scenes as terrifying as they were in real life and the whole film a powerful depiction of the heroism, the tension and the enemy tactics in the battle. 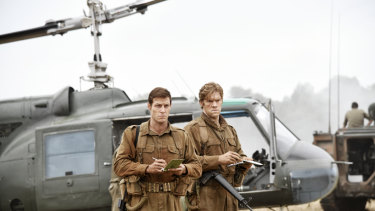 "I was just reflective when I came away from it," he says. "And I was a bit excited. I thought at last we're going to have the story told." 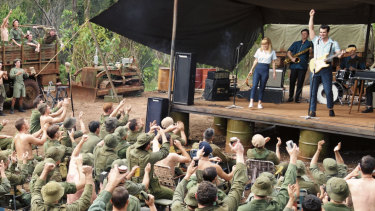 Little Pattie (Emma Dougall) and Col Joye (Geoffrey Winter) perform for the troops at Nui Dat Base in Danger Close: The Battle Of Long Tan.Credit:Jasin Boland

It was a victory attributed to the outnumbered troops being supported by artillery fire, the helicopters resupplying ammunition and armoured personnel carriers arriving just in time.

Dr Grandin is hoping Danger Close will finally lead to the heroism of the Australian troops being recognised.

"People haven't actually stopped and thought 'what did those guys actually do and how did they do it?," he says.

Danger Close: The Battle of Long Tan screens at Event Cinemas George Street on Saturday and Randwick Ritz on Sunday. It opens on August 8.