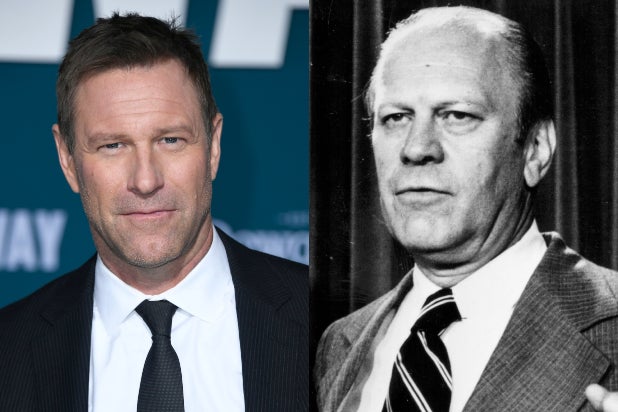 Showtime has found its first president for its anthology series on presidential wives, “The First Lady.” Aaron Eckhart will portray Gerald Ford, the 38th president.

The series is described as an exploration of the lives of “America’s charismatic, complex and dynamic First Ladies,” according to Showtime. The first season will center on three former occupants of the White House: Michelle Obama, Betty Ford and Eleanor Roosevelt. Viola Davis will play Obama. The role of Eleanor Roosevelt has not yet been cast.

Gerald Ford was the first person to hold the office of both vice president and president despite never being elected to either office. A former football play-turned-congressman, Ford was appointed as Richard Nixon’s vice president after Spiro Agnew’s resignation in 1973, then assumed the presidency when Nixon resigned a year later. He was defeated by Jimmy Carter in the 1976 election and has the shortest tenure of any president who did not die while in office.

Pfeiffer’s Betty Ford set a precedent as a politically active presidential spouse and is described by the network as “one of the most candid first ladies in history, commenting on every hot-button issue of the time.” Ford was known for speaking publicly about her battle with alcoholism and substance abuse.