Secretary of State for Housing, Communities and Local Government, Robert Jenrick, was scheduled to appear on Good Morning Britain on Friday morning and BBC Breakfast viewers were quick to point out he was not set to be interviewed by Naga Munchetty or Charlie Stayt. Many tuning in were quick to question why Jenrick would not be appearing on the show.

Jenrick last appeared on BBC Breakfast on Thursday 18 March when Stayt mocked the large Union Jack flag which was on display behind him.

“I think your flag is not up to standard size, government interview measurements. I think it’s just a little bit small, but that’s your department really,” Stayt remarked.

Munchetty could be seen laughing at his co-hosts comments, adding: “There’s always a flag. They had the picture of the Queen, though.”

Their reaction to Jenrick’s flag sparked backlash online but the BBC has defended the pair. 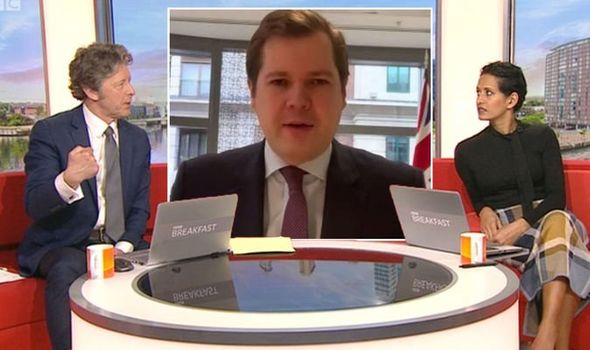 They stated in their latest complaint report: “We received complaints from people unhappy with a comment Charlie Stayt made about the flag in the background of an interview and Naga Munchetty’s subsequent activity on social media.

“At the end of a long, serious interview with the Housing, Communities and Local Government Secretary Robert Jennick, Charlie Stays made an off-the-cuff remark about the size of the flag behind Mr Jenrick.

“It was meant as a light-hearted, off-the-cuff comment and no offence or disrespect was intended.

“Naga and Charlie have been spoken to and reminded of their responsibilities, including the BBC’s impartiality and social media guidelines.” 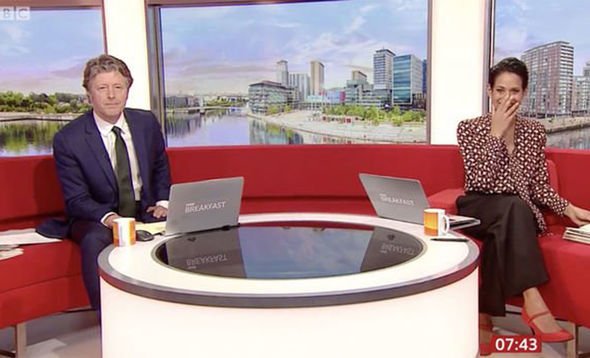 Following the incident, no Tory ministers have appeared on BBC Breakfast to be interviewed by Stayt and Munchetty.

Taking to Twitter to question Jenrick’s absence, one viewer tweeted: “Are ministers boycotting Naga & Charlie? If so what silly little snowflakes they are. #bbcbreakfast.”

Another posted: “2 days in a row with no visit from a trusted Tory MP for #bbcbreakfast Was a tricky question asked last time… Robert jenrick are you worried naga might ask you a real question.”

A third continued: “Have the #BBC avoided having government ministers on with Charlie Stayt and @TVNaga01 or are they being boycotted ? #BBCBreakfast.”

Last week it was reported Director General of the BBC, Tim Davies, was facing demands from a group of Tory MPs to discipline Stayt and Muncetty.

In the letter coordinated by Bassetlaw MP Brendan Clarke-Smith, they said: “We have been inundated with complaints from constituents on this matter.

“We feel that the hosts need reminding that the B in BBC stands for British and that the comments and attitudes on display towards both our flag and our Queen were inappropriate and also disrespectful.”

They also referenced the complaints the BBC received over Stayt and Munchetty’s appearance on Saturday Kitchen as they were branded “rude” to host Matt Tebbutt.

“We therefore feel that the behaviour in this instance was inappropriate and fell below the high standards expected at the BBC,” the group wrote.

“We would therefore ask that both Mr Stayt and Ms Munchetty are reprimanded for this behaviour and would ask them to apologise for their conduct.”

BBC Breakfast airs daily on BBC One at 6am.