“What if we made [iname of popular movie here] but for [a different audience than said first film]?” is a classic Hollywood formula, and while Paul Leyden’s “Chick Fight” is built on the somewhat shoddy assumption that David Fincher’s “Fight Club” wasn’t really for the ladies, crafting a feel-good comedy around a bunch of gals who start their own underground boxing group isn’t a bad idea. Neither is producer-star Malin Akerman, an actress who brings relentless energy and enthusiasm to even the most anemic features. And while the premise of “Chick Fight” may be featherweight, it’s the film’s phony feminist execution that turns it into a real loser.

It all starts predictably enough: Anna (Akerman) is struggling with the responsibilities of adult life, evidenced by both her inability to pay her bills (her car is repossessed in the opening credits) and her heartbreak over her dead mom (her morning routine can only start after she says hi to a picture of the pair them in happier times). Akerman is adept at playing believably addled, as the script (from first-time feature writer Joseph Downey) piles on complications that only muddy the waters, from her failing coffee shop to her dad rediscovering his sexuality.

After Anna literally burns down the last good thing in her life and her father’s romantic partner reminds her that everyone is capable of big personal changes, the stage is set for a sweet slice of mid-life crisis comedy. Enter the sassiest little fight club anyone ever did see, billed by Anna’s big-talking best friend Charleen (Dulce Sloan) as a “safe haven” outside the confines of society that lets women really just be women. Whereas “Fight Club” was about punching back at the evils of capitalist greed, “Chick Fight” is about bored ladies who think saying “vagina” a lot (gasp!) and calling other women “bitches” with startling regularity (double gasp!!) equals badass feminism. It was, very clearly, written and directed by men.

And, despite the club’s distinctly female bent — additionally powered by a twist about the group’s origins that defies logic and seems baked in to add another layer of emotion for Anna, who really doesn’t need it — “Chick Fight” is lousy with, well, lousy men. Leyden and Downey may have set out to make a feminist film, but they sure as hell don’t shy away from any excuse to trot out random dudes pushing the gals to yell about their girl-power ethos to unnecessary characters who will, of course, go for it. 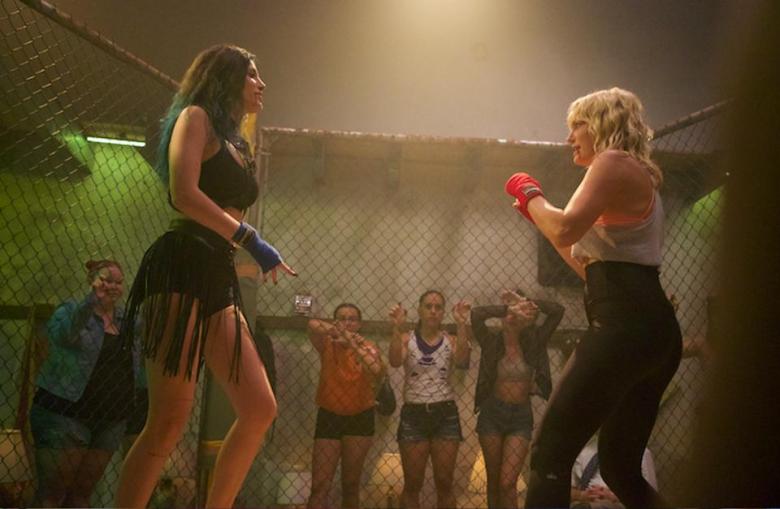 That includes Alec Baldwin as Anna’s eventual coach (even in the world of “Chick Fight,” there are no elder ladies available to inspire a worrying amount of training montages) and Kevin Connolly as her love interest. (An aside: the film was shot in early 2020, six months before the former “Entourage” star was accused of sexual assault, making a scene in which Anna tells his character that she feels “very consensual” one of the year’s most unintentionally uncomfortable.)

Of course, a truly equal society includes all sorts of people, but the film’s weird reliance on wholly expendable male characters feels strange, as does its desire to cast Bella Thorne’s brash Olivia as Anna’s primary antagonist because she’s, well, kind of mean? Olivia is the feistiest of the group’s brawlers but seems to hate every minute of it, terming the club “a support group for basic bitches.” (In film about female empowerment, no one bothers to try kicking her out.) She is Anna’s villain to battle, as “Chick Fight” cycles through endlessly predictable beats, all leading up to the! big! fight! against Olivia, the only character who seems truly in control of her own power (oh, what a bad girl!).

Despite Akerman’s consistent charm and willingness to get down and dirty on Anna’s quest for self-actualization (and smacking the crap out of people), “Chick Fight” never punches up, constantly churning out repetitive, cheap, and lazy narrative choices meant to propel it to an ostensibly happy ending. The real result: a flimsy conceit twisted into something not just unremarkable, but actively offensive to the kind of story it’s meant to be telling. In short, a gut punch for anyone hoping for something with even a drop of insight.

Quiver Distribution will release “Chick Fight” in select theaters and on various digital and VOD platforms on Friday, November 13.

As new movies open in theaters during the COVID-19 pandemic, IndieWire will continue to review them whenever possible. We encourage readers to follow the safety precautions provided by CDC and health authorities. Additionally, our coverage will provide alternative viewing options whenever they are available.