Home » TV & Movies » Claire Darling: An overload of atmosphere and Deneueve in a dodgem car

In Claire Darling, Catherine Deneuve appears on screen for the first time with grey hair. I doubt that French cinema could ever come up with a more potent symbol of time's passing.

She's cast as the widowed chatelaine of an estate in a French village. A recluse for years, she's realised that dementia is setting in and in response, she's laying on a final garage sale aimed at ridding the house of its many ghosts. 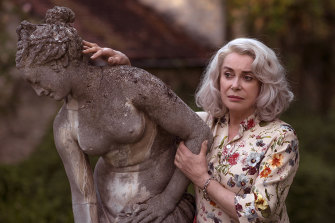 An avid collector of antiques, heirlooms and other curiosities, she's going to let them all go for next to nothing. It's decisive act, giving us the signal that we're in for an extended trip down memory lane that is bound to be both traumatic and cathartic.

Director Julie Bertuccelli seems to have a thing about families and their collective memories. Her last film, The Tree, was a French-Australian co-production shot in Queensland with Charlotte Gainsbourg as a young widow dealing with her eight year-old daughter's unshakeable belief that the spirit of her father is living on in an old Moreton Bay fig in their garden.

This, too is a mother-and-daughter story. Deneuve's real-life daughter, Chiara Mastroianni, co-stars as Marie, who's just returned to her mother's house after an absence of 20 years in the hope of ending the Cold War which has set them at odds with one another for most of her life.

But Claire shows no signs of thawing. Deneuve's performances have loosened up lately. There has been a lot of smiling and several comedies, with one or two of them incorporating some entertainingly louche behaviour. But she's back to her old unflappable self in this one. It's clear that Claire's aplomb will be the last thing to go. She spends much of the film chain-smoking while wandering in the half-dark amid the house's clockwork dolls, chiming time-pieces and old portraits. Now and again, one will spark a flashback and she'll encounter her younger self, played by Alice Taglioni, who looks as if her hair got her the part.

And gradually, in flashback, the house gives up its secrets. We meet Claire's husband, Claude (Olivier Rabourdin), an abrasive character worried about going broke, and her beloved son, Martin (Simon Thomas), whose death in an accident ruins her life.

And we see that she has never had any time for Marie, who is seen in childhood, trying to make sense of her mother's indifference. Claire, it seems, is bent on charming everybody but Marie – and her father. 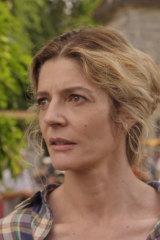 It's a film overloaded with atmosphere. The script is adapted from a novel by an American, Lynda Rutledge, but Bertuccelli has set it down in her own grandmother's house and stocked it with some of her family heirlooms. Delusions and fantasies are so tightly woven into the flashbacks that it's sometimes hard to unravel fact from fiction.

And to make the emotional landscape even busier, there's a fun fair in the neighbourhood. I'm not sure why – apart from the fact that it gives Bertuccelli the chance to film Deneuve taking a dreamy ride in a dodgem car after the other patrons have gone home.

The script moves at an equally slow pace, although it does make a late dash towards a surprise finish. And Mastroianni is a comparatively late arrival on the scene. Before she appears, Claire fills in the script's idle moments by ambling serenely around the garage sale while Martine (a sparky Laure Calamy), a family friend now working as an antique dealer, tries to persuade her to call it off.

Marie herself doesn't care about the losses. To her, the house and its contents mean nothing but sadness. She's tempted to give up and move on again yet her love for her mother won't let her. It's unreasonable but that's the nature of love and Mastroianni's hurt and frustration are entirely credible. In contrast, the volatile cocktail of charm, flirtatiousness and spite that makes up Claire's personality is not.

In the end, it seems like a film in thrall to the attractions of its design with Deneuve cast as the décor's photogenic centrepiece.