Daniele Donato-Briones just took to social media to apologize for her behavior on Big Brother 22.

The primary focus of Dani’s apology seems to be toward Ian Terry, a BB22 cast member who she had insinuated was faking symptoms of autism.

There was a lot of blowback from Big Brother fans who watched a group of the primary alliance (The Committee) get together and make fun of Ian on several different occasions.

It was due to those sessions that Nicole Franzel ended up losing some of the sponsors to her podcast. Since leaving the house, though, she has resumed doing the Coco Caliente podcast with her fiance Victor Arroyo.

Elsewhere, Memphis Garrett went on social media to reveal that he had been receiving death threats stemming from his own behavior in the house.

Social media has been pretty unkind to Daniele as well, which might have been one of the reasons that she felt she needed to make such a public address about the situation.

Taking to her Twitter account, Dani wrote, “I want to apologize for any and all comments that I made that offended anyone while on Big Brother.”

She went on to speak about her goals to spread love in her life and that she feels that the game of Big Brother doesn’t truly represent her as a person.

She said, “The idea and concept of the show is to lie and manipulate people all while getting close to them and I think this unrealistic way of living sometimes affects what houseguests do and say that is out of character to whom they truly are as a person.”

“When it comes to Ian, I don’t see Ian as different,” Dani stated. “I see him as an equal or even as someone who is above me as he has an intelligence that I cannot completely grasp on his level. My sense of humor can be very dry and brash and I joke around a lot with and about people I like, and so I would joke around about Ian as I saw him as my equal.”

In the final paragraph, Dani apologized for the microaggressions that came from her while inside the house.

She then ended the message by writing, “I am so sorry for any comments I made that were at all offensive and I promise you I will be better.”

The full-length apology from Daniele Donato-Briones is shared below so that everyone can read it. 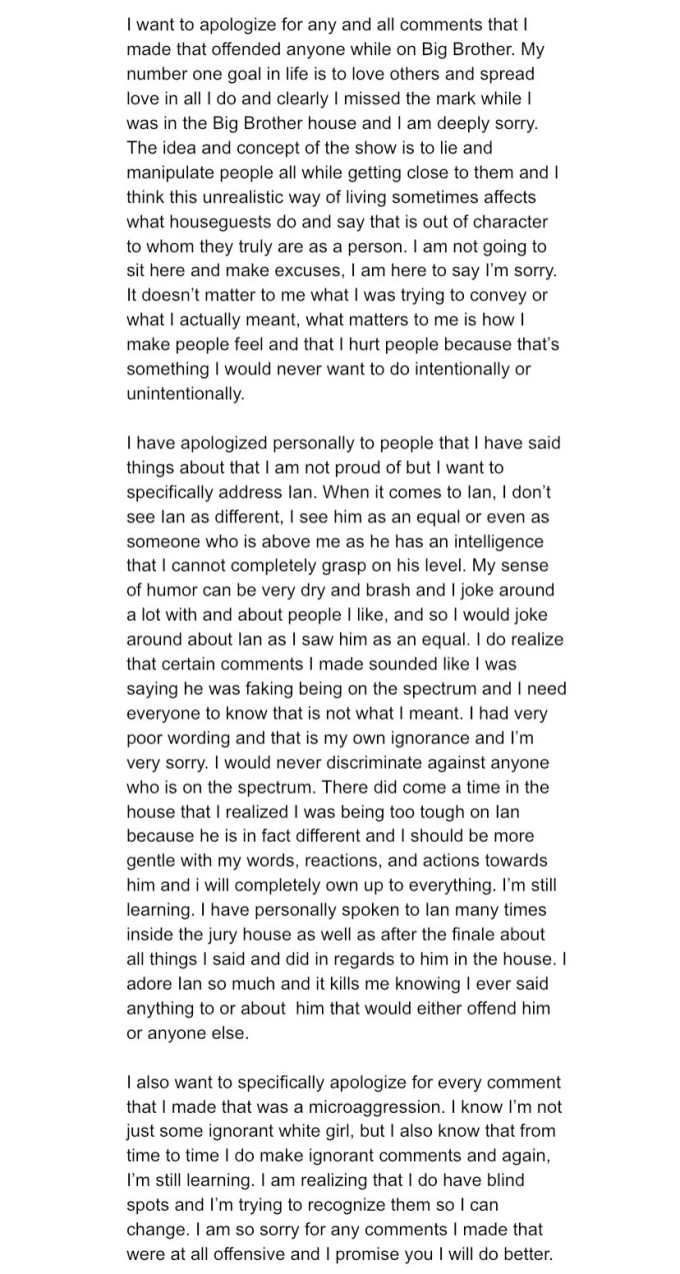 In some more positive news from the world of Big Brother, Rachel Reilly just gave birth to her second child with husband Brendon Villegas.

And after reuniting with Victor, Nicole is back to enjoying life and speaking about it. She teased on her podcast that she will soon be addressing all of the controversies from BB22.

Big Brother is currently on hiatus at CBS.