Her face cracks with shafts of light, her body swirls with fire and her eyes light up like golden lamps. There isn’t a lot of real-life experience to draw on, says Sophie Turner, when transforming from regular telepathic mutant Jean Grey into the malevolent Dark Phoenix, the X-Men’s version of a good girl gone bad. On screen her chin dips, the lamp eyes switch on and she reaches out to zap her assailants with lightning bolts of destruction. “You feel like an idiot doing it really,” Turner laughs. “You’re just standing there waving your arms around in front of a green screen. You have to use a lot of imagination.” 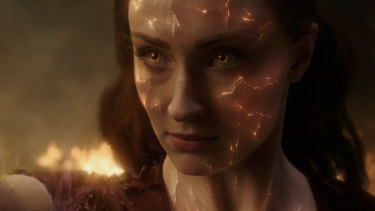 Sophie Turner listened to sad songs to help her prepare for the role of Dark Phoenix.Credit:

Turner is about as habituated to fantasy worlds as anybody could be, having played Sansa Stark in Game of Thrones since she was 12. As Sansa, she went through every imaginable trial – seeing her father beheaded, being raped by her barbaric second husband then watching him be torn apart by dogs at her own command when she finally gathered the strength to become a leader of men herself – but as she says, these were horrors grounded in the real history of the Wars of the Roses. “Game of Thrones is sort of normal, bar the dragons.”

In the more cosmically disordered Dark Phoenix, the story goes that the X-Men are sent to rescue some astronauts marooned in space – a regular mission, conducted heroically – when Jean is hit by a solar flare. It should kill her, apparently, but it doesn’t. “That solar flare basically is within her and is kind of this burning energy that needs to come out. Which it does, in very destructive ways. She will be containing it, but it will make her do something irrational, very spontaneously. And the more Phoenix she gets, the better she feels; it’s almost like she goes into a meditative euphoric state when she fully Phoenixes out. The movie is kind of about her unravelling and the X-Men sort of unravelling too.”

With no real-world gauge of how to behave in a Phoenix-like fashion, she and Simon Kinberg – who, having written two previous films in the current X-Men series, Days of Future Past and Apocalypse, has taken over the franchise director’s chair from the disgraced Bryan Singer – developed what she calls the Phoenix scale. “We originally had photographic representations of what that would be like, just to kind of help me imagine what level it’s at,” Turner says. “Obviously we couldn’t see the visual effects, but they would draw the things that were happening to my hair and my face and eyes. By looking at the photos I would be able to tell just how far gone she is.”

The X-Men have had mixed fortunes on screen. Jean Grey’s Phoenix story, taken from the original comics, was just one strand of X-Men: The Last Stand in the X-Men series that ran from 2000 to 2014, with Famke Janssen playing the role. Kinberg was one of the writers on The Last Stand but said later he was not happy with it – a view shared by critics and hard-core fans – and that he would like to have another crack at the Dark Phoenix story.

After Days of Future Past reset the dial for some characters (Wolverine goes back in time and erases Jean’s death) the way was clear. Turner was introduced in Apocalypse as the young Jean Grey, beginning to explore her powers. The new film is entirely given over to her story. “This Dark Phoenix movie is very different from the earlier one,” says Turner. “It’s kind of like Logan in that it’s more emotional, very character driven, very grounded, very different from other spectacular X-men movies.” She made herself a playlist to get her in the right spirit for Dark Phoenix that consisted almost entirely of sad ballads. “Because I cried the majority of the movie.” 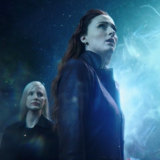 Turner could not be described as the star of the labyrinthine Game of Thrones, with its complex plots and counter-plots and host of characters, but her trajectory from victim to commander was probably the most emotionally charged of all of them. Off screen was at least as traumatic, since she was obliged to traverse adolescence in the full glare of the internet. Now 23, she has recently talked about how badly the critical scrutiny of the show’s unexpectedly massive number of followers affected her, plunging her into an eating disorder, depression and thoughts of suicide even as her character’s heroism in the face of brutality inspired her.

It was Sansa’s wedding-night rape that helped reconcile her to that online hinterland, in fact. She was only 16 when that scene was shot. Legions of fans declared its brutality gratuitous and declared that they would stop watching the show. “There was kind of like a huge blow-out on Twitter and all over the media, talking about how we shouldn’t be showing that, it’s totally disgraceful, that kind of thing,” she says. “And it got me really thinking about why we shouldn’t have these discussions when this is happening every single day. Why can’t we talk about this?”

I have a message to get across and social media has been so amazing for that.

Her fury turned her into an activist; she joined an organisation called Women for Women that provided practical help and counselling to women raped in war, travelling to Rwanda to become the organisation’s public face. It also gave a point to her Instagram account, which has 12 million followers. “I have a message to get across and social media has been so amazing for that. I’ll never be OK with it, but I will definitely utilise it for the good things.”

She knows she will miss Sansa. “I don’t know if I’ll ever fully part with her. But it is very difficult to do that, to kind of consciously say goodbye. It’s very difficult. And to say goodbye to everyone else and their characters,” she says. “I’ve never felt more empowered than when I’ve been in my Sansa costume on the set of Winterfell. That’s where I felt most comfortable always – and that’s what I’ll definitely miss the most.”