Elyse Slaine joined the Real Housewives of New York City as an unofficial friend of the show. And while she may not be holding the apple as a full-time member of the housewife cast, she sure made her mark in Season 12.

Elyse made her real housewives debut as a friend of RHONY original, Ramona Singer and closed out the season as Ramona’s public enemy number one. Fans speculated that it was Ramona who prevented Elyse from being invited to the reunion episodes.

Part of the reason that Elyse was brought onto the show was her tie to Ramona. However, once Elyse met the rest of the group and started building other relationships, her friendship with Ramona began to deteriorate.

One housewife that Elyse seemed to quickly click with was RHONY newcomer, Leah McSweeney. And when Ramona caught wind of this new friendship she started to cut her ties with Elyse.

During a conversation with Luann, Ramona explained why she didn’t like Elyse anymore.

Ramona continued, “I don’t trust her as far as I could throw her. I think she’s manipulative, she’s not genuine, and she disgusts me.”

Ramona pretended not to know Elyse when confronted at a party

Then, while Leah McSweeney was planning a party, Ramona told Leah that she wasn’t allowed to invite Elyse to her party. But being the free-thinking spirit that Leah is, she decided to go against Ramona’s advice and invited Elyse anyway.

At the party, Elyse attempted to speak with Ramona but was completely ignored. Ramona attempted to walk away without acknowledging Elyse and Elyse wasn’t having it.

When Ramona arrogantly responded, “I don’t know who you are,” and tried to walk away, Elyse grabbed her by the arm in a desperate attempt to force a conversation.

“You’re going to f***king walk away like you don’t know who I am? You are a duplicitous, nefarious, narcissistic, superficial bitch,” Elyse sternly snapped as Ramona ran out of the party.

Ramona called Elyse a ‘black widow’ during the reunion

Shortly before the reunion started taping, rumors were swirling that Elyse wasn’t going to be joining the other housewives for the reunion.

It turned out that this was true. But just because Elyse wasn’t there in person didn’t mean that host Andy Cohen wouldn’t question her falling out with Ramona.

When the topic of Elyse came up during the reunion, Ramona had no kind words about her former friend.

After the reunion episodes aired, Elyse shared a photo of herself and another former friend of the show Barbara Kavovit.

A follower took the opportunity to comment, asking Elyse why she wasn’t at the reunion.

Her answer was simple.

“Ramona prefers talking behind my back,” she wrote.

It doesn’t look like the two will be rekindling their friendship anytime soon. 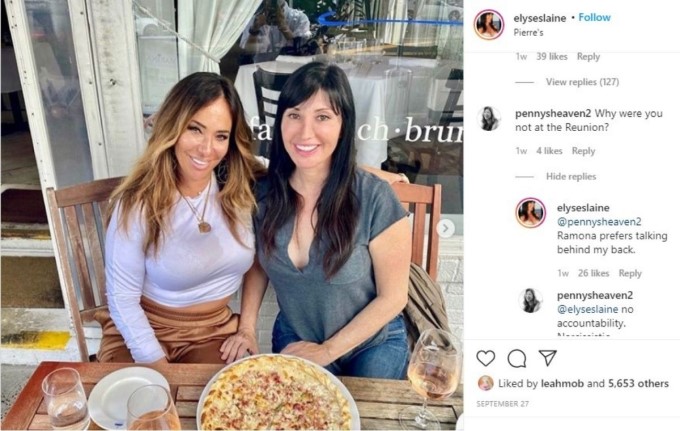 The Real Housewives of New York is currently on hiatus at Bravo.