After a terrible day for David Metcalfe (played by Matthew Wolfenden) and his stepson Jacob Gallagher (Joe-Warren Plant) – it seems the pair’s relationship may have been ruined for good – Eric (Chris Chittell) gave the shopkeeper some words of wisdom.

Insisting Jacob would come back from the brink when the evil Maya (Louisa Clein) received her comeuppance, Eric appeared to foreshadow what’s to come on the ITV soap.

“Once she’s out of the picture the battle will be half won, trust me,” the Emmerdale legend promised.

Unfortunately, things may not go as planned, as earlier in tonight’s double bill, David nearly lost his cool when Bear Wolf (Joshua Richards) made light of Jacob’s abuse in the Woolpack pub.

As they were talking about being sorry for David and his stepson’s ordeal, Bear suddenly said: “I bet Jacob’s not.”

It was clear the wrestler didn’t understand the seriousness of Jacob’s trauma, and his outrageous views caused the pub to fall silent.

David saw red and faced the athlete head on, but luckily his father Eric stepped in. 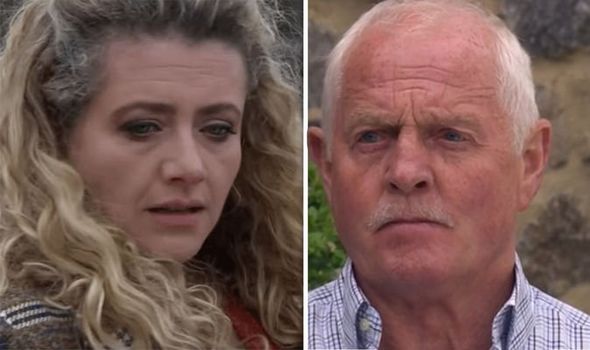 “David stop it, he’ll pulverise you,” the businessman begged.

Bear later warned David to back off, but his inappropriate comments continued.

“He reckons Jacob was lucky to be abused,” David said in horror, and Bear insisted his opinion was correct.

“No that’s different,” the village newcomer said. “Boys will be boys.”

Devastated, David’s voice rose and he told all the locals “Jacob’s still a kid and needs protecting”, unaware his stepson was about to emerge from Chas Dingle (Lucy Pargeter) and Paddy’s (Dominic Brunt) home at the back of the pub.

Jacob yelled at his guardian and told him in no uncertain terms he would be “staying with Noah [Dingle]” that night.

Leyla on the other hand is still desperate to see her biological son as a little boy.

After another run-in at David’s cottage, Leyla sadly asked: “What’s happened to him?”

“Oh come on Leyla open your eyes, he’s changed,” David replied. “It’s not just what he says. It’s the look on his face, the contempt.”