Like other filmmakers of recent years such as Alfonso Cuaron with Roma, Paulo Sorrentino with The Hand Of God, and Kenneth Branagh with Belfast, Sam Mendes is in a mood to explore his own memories of his formative years, but unlike those films, he doesn’t put his younger self at the center of the story, but he does put his own experience of seeing movies in theatres right up front. But make no mistake, this is decidedly not the lovingly sentimental Cinema Paradiso, but rather a film that is, at least in part, a valentine to moviegoing in a world of increasing tension and racial strife, a place to get away from the sad realities of life, if only for a couple of hours. 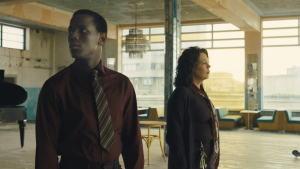 Mendes says he has been grappling with the idea of doing a very personal project like this for some time, even at one time considering an autobiographical film, but the pandemic gave him time to reflect and that is where he came up with the idea for the setting, and then where it could go from there. It is remarkable how much of it is so universally relevant still today, even as it is set 40-some years ago. Mendes, a much-acclaimed film and theatre director, also has a deep love for the palaces in which we watch his work, whether live on stage or in movies, and this film is on that level a loving ode to them, but in its own way. It also was conceived at a time in lockdown when Mendes wondered whether we would ever even see the inside of a theatre again, a perilous time we are still trying to come out of. Films as good as this one will help do the job.

Set primarily at the end of 1979, and into the early ’80s, Empire Of Light refers to a grand old seaside movie palace called the Empire in England, once a much bigger thriving entertainment and restaurant center, but now reduced to two screens showing such films of the time as All That Jazz, The Elephant Man, 9 To 5 and more. But make no mistake, this is decidedly not the lovingly sentimental Cinema Paradiso, but rather a film that is indeed showing us a movie going in a time of increasing tension and racial strife, a place to get away from the sad realities of life, if only for a couple of hours. The world outside those doors is frightening, the world inside though is magical, at least that is how Mendes remembers it.

Although there is one hilarious encounter with a patron, the center of this original screenplay by Mendes (his first solo screenwriting credit) is on the employees, notably Hilary Small (Olivia Colman), the longtime assistant manager, and a new employee named Stephen (Micheal Ward), a young Black man who takes tickets. It is clear right from the start that Hilary is an unhappy woman going about her job, but clearly, with a past we will eventually discover as she suffers from some mental problems and manic episodes. She does her day-to-day duties almost by rote having come out of some recent downturn in her life, but also is used by the Empire manager Mr. Ellis, a married man calling on her for sexual favors in his office. She is at a dead end but succumbs to the dark side of the job in order to simply keep going.

Showing Stephen the ropes without much enthusiasm for the task – you can tell she has done this training many times – he convinces her to let him see the now closed and decaying part of the theatre and restaurant that is upstairs and locked away. In there, pigeons are flying in and out of the broken windows but one is injured. Stephen rescues it and that seems to lighten Hilary’s mood. It becomes the beginning of a beautiful friendship, leading even to an impulsive kiss from Hilary as they gaze out on the fireworks from the roof of the Empire on New Year’s Eve. It blossoms into a romance they keep secret from their co-workers, but a day trip to the beach starts to reveal more serious issues for Hilary. The drama intensifies and Mendes blends real-world problems into the story including mental health, racism, political problems and much strife of the times including the Brixton and Toxteth riots, the effects of Margaret Thatcher, skinheads violence (a scene where they break down the Empire’s doors is scarily reminiscent of January 6th), and other intrusions into the world where a movie theatre seems caught in the crossfire of change.

Mendes clearly shows his love for movies, and the influence they obviously had on him, but using the setting of a sacred place where we want to escape, he is not afraid to go to uncomfortable places including the fragile Hilary’s sudden personality change, and racial attacks on Stephen that have the effect of dramatically altering the mood. Mendes is such a skilled director he manages to navigate these personal tragedies without letting his film escape his control. It all comes together in such a satisfying, yet entirely plausible way that Empire Of Light keeps us in its grip for the entire two hours. Much of the credit for that belongs to the stunning performance of Colman (you would expect less?), an actor who can instantly express more with one facial expression than 120 pages of dialogue ever could. This is a character requiring someone with Colman’s skill and range, and there are very few I can think of who could pull off its emotional twists and turns the way she can. It is a huge challenge met head-on with the force of a great star. Mendes wrote it with her in mind. Relative newcomer Ward (Small Axe Lovers Rock) delivers on every aspect of a breakout role that he embraces with tremendous talent. We believe the two of them, hurt for them and root for them. There isn’t a false note from either actor in a relationship where they both give a gift of light to each other. 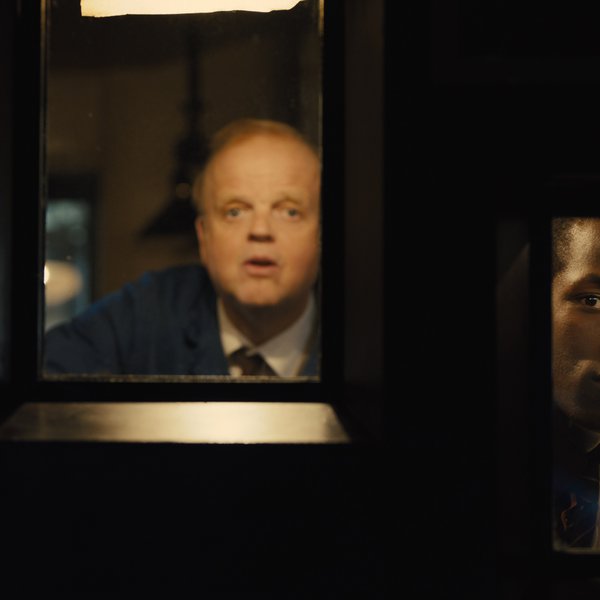 Among the supporting cast, the ever-reliable and watchable Firth’s creepy boss isn’t loaded with dimension but he delivers exactly what is needed to make us hate the guy. Toby Jones on the other hand we like very much as Norman, the projectionist who looks at his job in the booth like an artist might. Those scenes, particularly one near the end where Hilary begs him to show her a movie, any movie, are priceless and a true love letter to the bygone days of projecting film. Jones also has a key line in the film that works on more than one level as he shows Stephen how to thread a projector, “without the light you don’t have anything”. Other standouts include Tom Brooke and Hannah Onslow as quirky but delightful co-workers, and Tanya Moodie as Stephen’s protective but loving mom.

Working again with his Oscar-winning 1917 cinematographer Roger Deakins, the visual look and style of the film is gorgeous, the Empire shot with the tender loving care of a master. A big shoutout goes to production designer Mark Tildesley who took a long-abandoned theater in Margate, on the South Shore of Kent and brought it back to its semi-glory days filled with posters and popcorn. The score is splendid and comes from two-time Oscar winners Trent Reznor and Atticus Ross, along with perfectly chosen songs on the soundtrack from the likes of The Specials and The Beat among others.

Producers are Mendes and Pippa Scott. Searchlight will release in theatres – thank the Lord – in December.  Movie and movie theatre lovers should not miss it.

‘The Lord Of The Rings: The Rings Of Power’ Aftershow ‘Inside The Ring’: Episodes 1 & 2