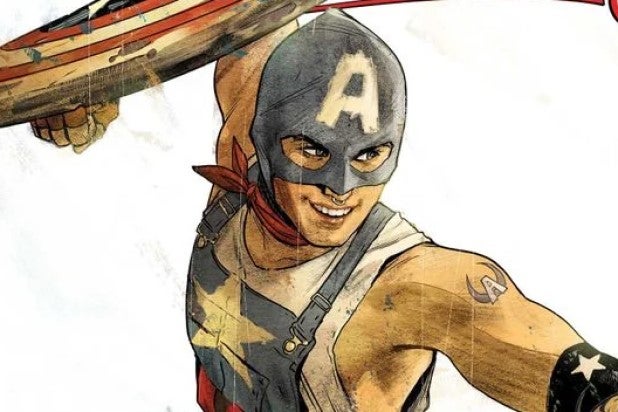 “The Falcon and the Winter Soldier” isn’t the only series introducing a new Captain America this year. Fans will also meet the first LGBTQ+ Captain America in a new series from Marvel Comics.

Dropping on June 2 to kick off Pride Month, “The United States of Captain America,” written by Christopher Cantwell and illustrated by Dale Eaglesha, is set to “celebrate the character’s incredible legacy by bringing together various Captains America from throughout the years for a grand adventure to find Captain America’s missing shield.”

The series will see the OG Cap, Steve Rogers, team up with Sam Wilson and Bucky Barnes on a road trip adventure to solve the mystery behind this new villain who not only stole the shield, but wants all the Captains dead. Among those various Captains is a man named Aaron Fischer, an openly gay man who is known as Captain America of the Railways who protects runaways and the unhoused.

Writer Joshua Trujillo and artist Jan Bazaldua — who is a trans — will introduce Fischer in the first issue of the series. (Each issue will introduce another Captain and there will be five issues in total).

“Aaron is inspired by heroes of the queer community: activists, leaders, and everyday folks pushing for a better life,” Trujillo said in a press release. “He stands for the oppressed, and the forgotten. I hope his debut story resonates with readers, and helps inspire the next generation of heroes.”

“I want to thank Editor Alanna Smith and Joshua Trujillo very much for asking me to create Aaron,” Bazaldua added. “I really enjoyed designing him, and as a transgender person, I am happy to be able to present an openly gay person who admires Captain America and fights against evil to help those who are almost invisible to society. While I was drawing him, I thought, well, Cap fights against super-powerful beings and saves the world almost always, but Aaron helps those who walk alone in the street with problems that they face every day. I hope people like the end result!”

“This story is ultimately structured like a “road movie,” harkening back in ways to old Bob Rafelson and Hal Ashby films, with Steve Rogers (and soon Sam Wilson, and later… other key members in Steve’s life) getting to directly interact with those he represents as a symbol and has sworn to protect, but in an up close and personal way he hasn’t experienced in a while,” Cantwell told Marvel.

Check out renderings of Captain America of the Railways below, including a variant cover by Nick Robles.