As an added bonus, “Good Omens” showrunner Neil Gaiman created a mini-movie cold open at the start of Episode 3 (“Hard Times”) to introduce the bromance through the ages between demon Crowley (David Tennant) and angel Aziraphale (Michael Sheen). For 28 minutes, the Biblical odd couple traipse through Noah’s Ark, The Crucifixion, The Globe Theater, The French Revolution, and more, to fraternize and to rescue one another from dangerous situations.

But for production designer Michael Ralph and costume designer Claire Anderson, it provided opportunities to go wild with the historical settings and period wardrobes. “It was a lot to stitch together and a very interesting journey to try to connect the dots so it all related visually,” said Ralph. “You only had a minute or two to have an impact and what we had to produce had to be strong enough as an emotional moment.”

“They had to appear instantly recognizable whilst they fit comfortably within the period,” added Anderson. “We started with the contemporary look of the actors and talked about how they largely saw themselves through the bulk of the show.” Crowley, who morphed into human form from a serpent, maintains a fashion-forward, goth look, eventually settling into a Keith Richards vibe with John Lennon-like spectacles to hide his snake eyes. Aziraphale prances around in off-white with gold highlights and over sized shoulders and lapels resembling angel wings. He embraces the Victorian-era fashion pretty much into modern times. 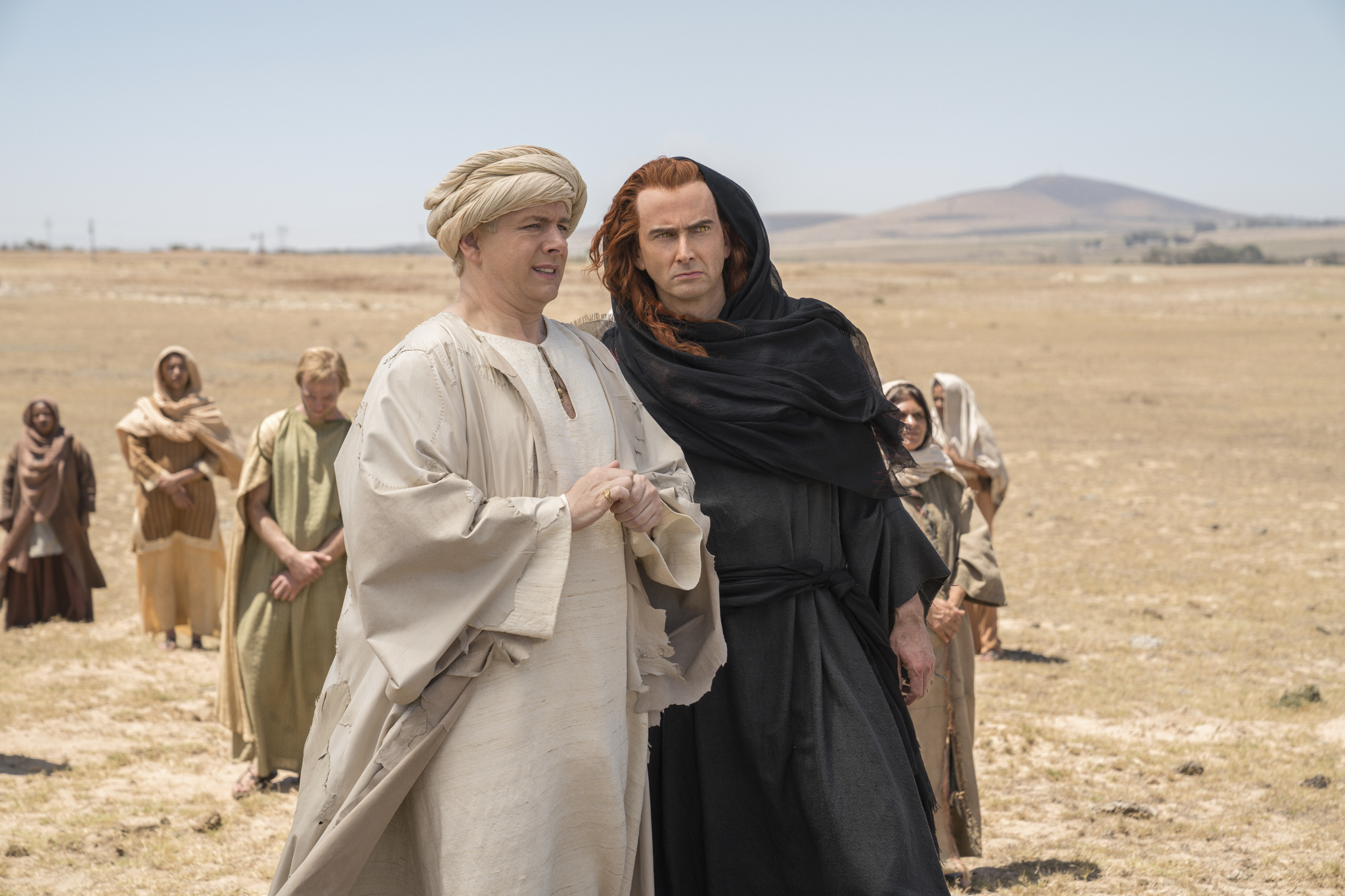 In terms of production design, Ralph shot the Noah and Crucifixion vignettes in Africa. It was like the Bible being depicted within the same three square-mile radius. “To do that in Africa was a real interesting piece of work because a lot of it was about the dialogue between them as a fence line and about the Ark in the distance,” said Ralph, who previously shot “The Ark” TV movie in Morocco. “Everyone expects a certain piece of imagery and it couldn’t be reinvented. You just stay on the characters and let everything happen in the background circumstantially. There was an authenticity about the landscape to make sure that the fence line worked, with background characters filling it out.”

Anderson looked to Pre-Raphaelite paintings of the ancient world from Victorian England for the early encounters up through the togas. “Crowley has a snaky skin texture to his robe or gown, and, by the time we get to the togas, he’s got a serpent staff and a thing holding his toga together,” she said. “Aziraphale’s got a golden ring that gets transferred to a signet ring by the Victorian era.”

The Globe Theater, of course, was a godsend. It was a ready-made set for Crowley and Aziraphale to discuss the tweaking of “Hamlet” with Shakespeare. “I don’t think anyone missed out on feeling the weight of making a piece within the performance space, which is, in many ways, the first great theater,” Ralph said. “As you could well imagine, we were limited by time and by the fabric of the location. We could produce ground coverage and played with what was there. It was a matter of breaking it down slightly by using leaves or rubble on the ground to give ourselves a little bit more of an edge to it, and to remove anything that was tourist friendly and gave us more of the period to work with.” 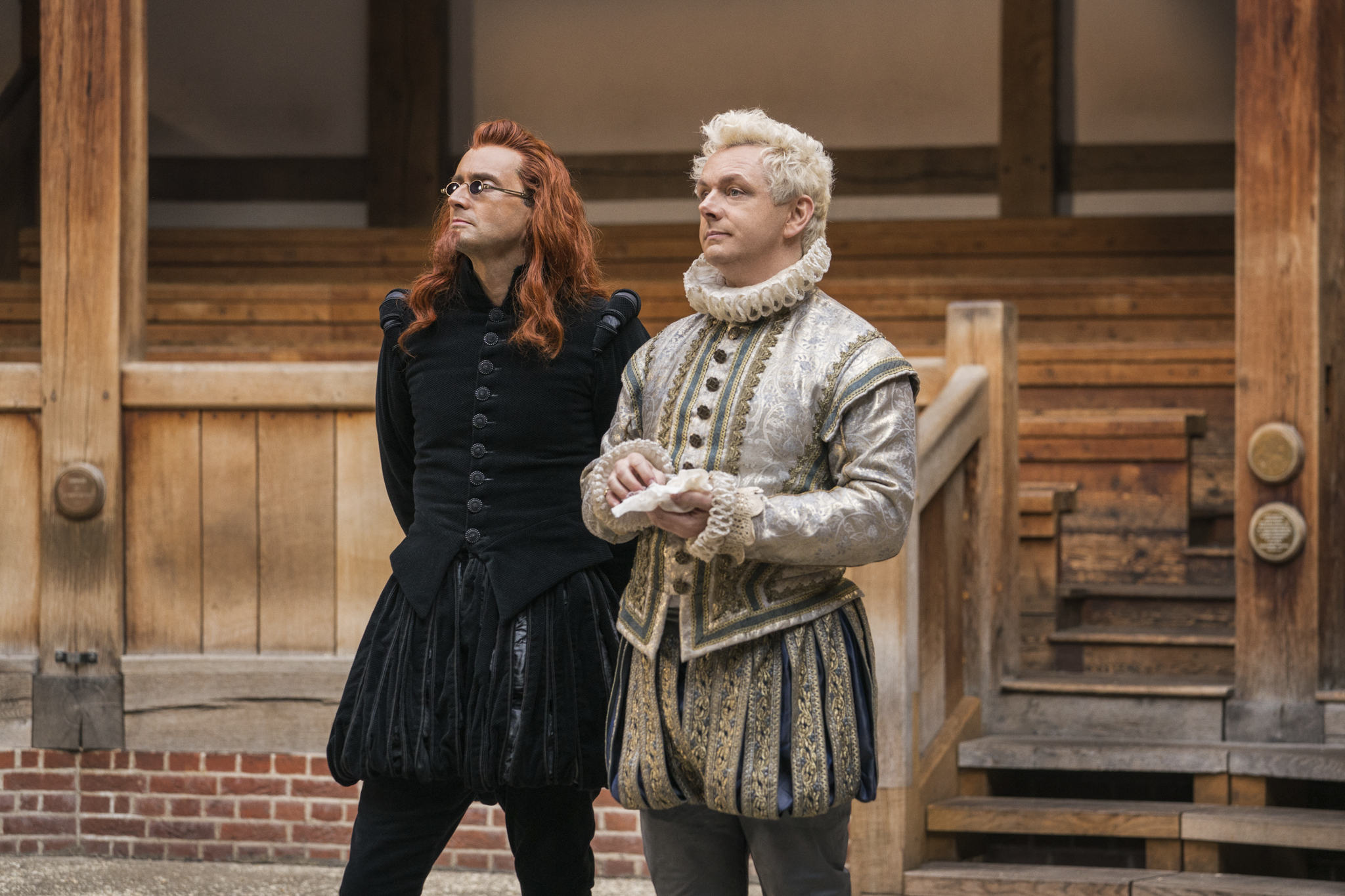 Anderson was lucky to play dress up with The Globe’s immense archive of costumes. Crowley and Aziraphale both look dashing in their silks. “Aziraphale reflects the color of his later wardrobe with a golden, metallic look, and the hint of blue will become the blue of his contemporary shirt,” she said. “It’s reflective of his flamboyant and luxurious lifestyle on earth. By cleverly using heavy fabrics, we make him look living the good life. Crowley’s top half of his costume is a finer cut and his legs are slithery and long. We continue using his physicality to resemble his origins as a serpent.

Meanwhile, the Rome and French Revolution sequences utilized the same set. And it was very interesting watching Crowley come to the rescue of Aziraphale in a Paris dungeon. “It was a concept where the camera is looking into the depth of the same set,” Ralph said. “We only needed to change lens apertures. The crew finished the night shoot of the Revolution and came back the next morning to a totally different world, and it all happened like magic.”

For the Paris sequence during the Revolution, Anderson fitted Crowley in cunning Revolutionary garb while, despite his grubby-looking white jacket, Aziriphale looks luxurious with a lace collar and gold brocade running down his tailored sleeves. “Aziriphale’s taste gets refined, which is consistent with his angelic, golden quality, and Crowley is curled up in the corner of the cell like a snake,” she said. 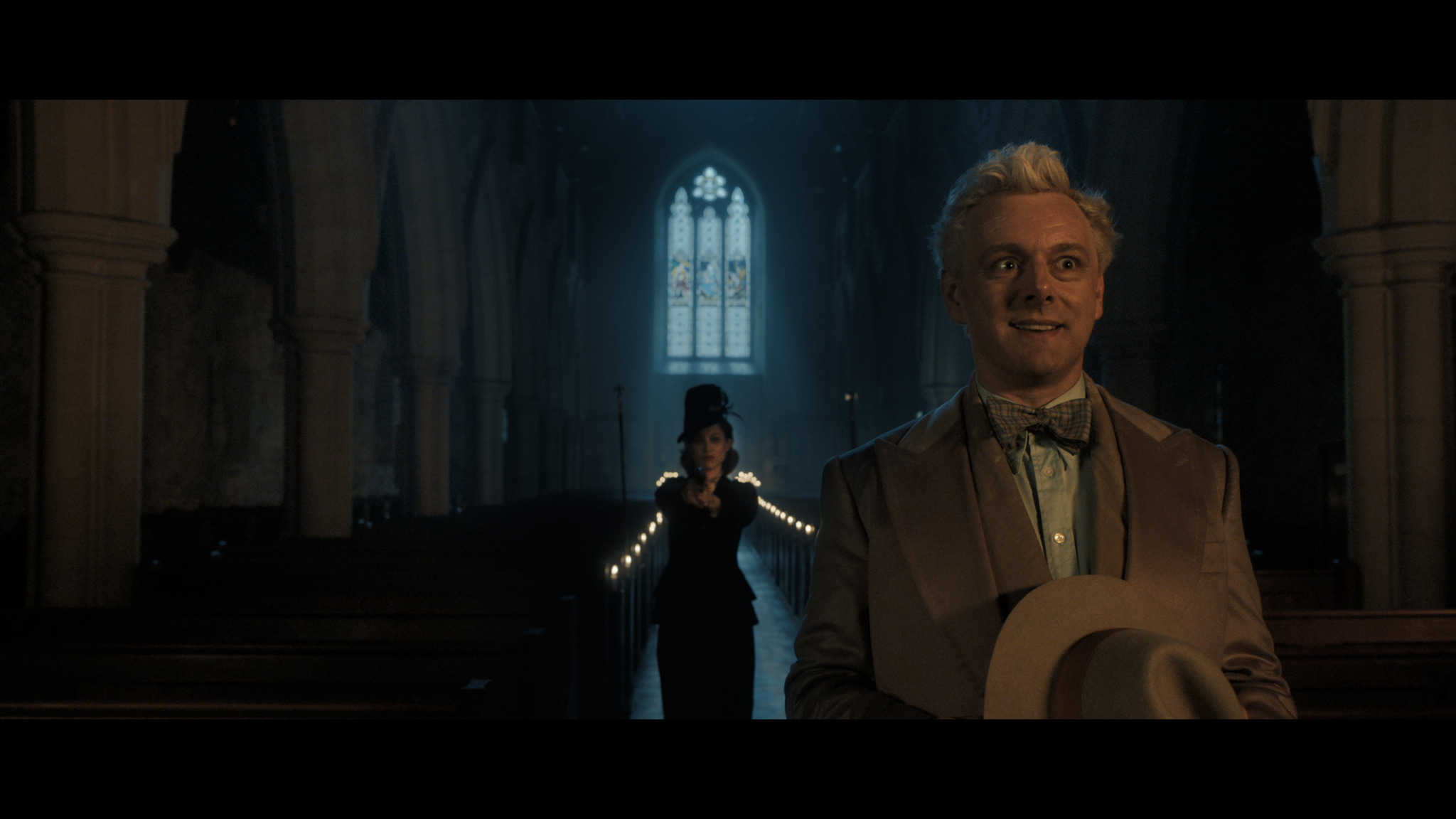 Their meeting in St. James Park in 1863 represents an important turning point for Aziriphale. “This high Victorian fashion is when he settles into his look,” Anderson said. “Aziriphale’s top hat is like a feathery velvet. And he wears big lapels on his jacket, representing wings. He also has a little stopwatch with angel’s wings on the chain and a signet ring. Crowley wears a long-lined Victorian dress jacket cut to his physique. He also has a dark shirt with dark stock, so there’s no light in him at all. His glasses are early welders with a side piece and are tinted to prevent anyone from seeing his eyes.”

One of Ralph’s most creative sets was a church in South Africa for a World War II spy scene with undercover Nazi agents. “I designed these candles and had them along the edge of each pew so that we could light up the runway,” he said. “It gave us a much stronger perspective. In the middle of the staging at the front of the altar, I put a pulpit of my own, which was a large, sculptured eagle on a face that the bible was on.

“And I needed that for when it blows up so that I could have a visual tag to being in the destroyed church. That was a complicated build, strangely enough, because I built The Crucifixion with such large crosses up on the hill, that I used all the same crucifixes and twisted and burned them and put them in the background of the church.”