Spoiler alert! Do not proceed if you have not watched the premiere episode of HBO Max’s Gossip Girl update.

Gossip Girl is back and she’s — er, they’re — ready for chaos.

HBO Max’s anticipated update dropped its first episode Thursday, wasting no time answering the biggest question that once lorded over the original series: Who is Gossip Girl? Instead of keeping alive the mystery behind Manhattan’s all-knowing pot-stirrer, the new series revealed that the new class of wealthy elites at Constance Billard are being tormented through a reborn Instagram account by their very own teachers, led by the uncool Kate Keller (played by Tavi Gevinson).

The reason behind the teachers’ united front to “resurrect” the dormant Gossip Girl? To rebalance the power dynamics at the school. See, it’s been years since Dan Humphrey was outed as the original GG (we’re still not over that nutty reveal!) and things have, to put it bluntly, gotten a whole lot worse between the students and the teachers. So why not scare the rich kids by sharing their salacious secrets for all to see? At first, the teachers tried to ruffle the students’ feathers by creating a Twitter account (pfft, amateur move) to out their dirty laundry before they switched to Instagram, adopting the spicy, gossipy language of the original GG that made a trivial coffee run seem provocative.

The teachers’ second go at stepping into Gossip Girl’s shoes worked like a charm and by the end of the first episode, queen bee Julien Calloway (Jordan Alexander) — whose elaborate plan to bring her long-lost sister, Zoya Lott (Whitney Peak), into the picture — was so shook by GG’s slick antics that it seemed like the power was shifting back to the teachers’ side. For now, at least. So what do Kate and her friends have in store for the new Upper East Siders with their new secret power?

“I thought it was so smart,” Gevinson told ET’s Leanne Aguilera of the reveal, adding that she “was not worried” about the new series showing their cards so quickly in regard to GG’s identity. “I was like, there’s no point in doing it again and doing the same thing [as the original series]. They already did that and I thought it would be fun to watch these characters try to keep up this [secret].” 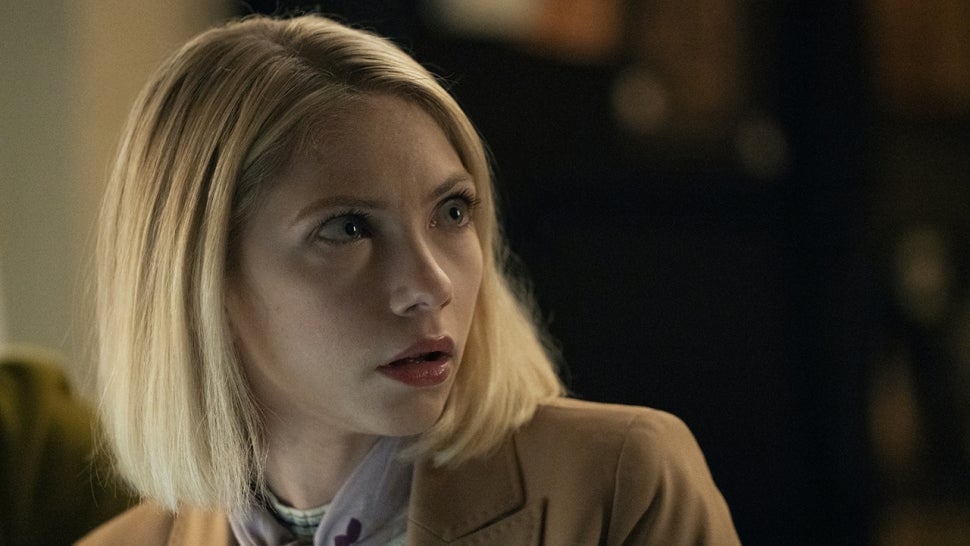 While we’ll actually get to see the teachers conspiring as a collective Gossip Girl, the reveal was borne out of a desire from the producers to peel back the curtain and get a glimpse into what really goes on when you’re the ones operating as GG. (The original series briefly showed the inner workings of Gossip Girl when one of its supporting characters pretended to take over the site for a period of time.)

“For the audience the first time around that didn’t get to see Dan sitting at the kitchen table with Jenny next to him and he was posting something about her and he had to watch it happen to her when she read it right in front of him, I felt like this time around I wanted to see that. I wanted the audience to be complicit in Gossip Girl,” executive producer/showrunner Joshua Safran explained of the switch-up. “Going along with Dan as you’re seeing the toll that it takes on you to report on the people you love most dearly.”

“In a weird way, Dan being Gossip Girl actually made the foundation for the way that the new show builds off of,” executive producer Stephanie Savage said. “[It] comes very much part of the mythology of Gossip Girl in the show. It gets excavated and repurposed in the present.”

The producers knew very early on that they wanted to give more of a spotlight to the teachers at Constance Billard through the twist. “I wanted to focus on the teachers and I wanted to see what would happen if the teachers try to regain control of these kids that are out of control,” Safran said, “knowing that they were the Gossip Girl from the top and watching it destroy them.”

And by having the audience in on the secret along with the teachers right from the jump, it added an element of intrigue. “It’s just a different approach to the storytelling,” Schwartz said. “It was a mystery in the first show and this show, it’s just a different approach, so the audience can focus on other things and see the toll that being Gossip Girl can take on people.”

Gossip Girl now being a group of people instead of a party of one brings about challenges and opportunities, Safran said, that they didn’t fully explore in the original, which ran from 2007 to 2012 on The CW.

“It allows for actual conversations. Dan alone would’ve been boring to watch him alone for 121 episodes sit there typing. They actually get to talk and they get to debate on whether this is a good idea or a bad idea,” he said. “Some tips they get in future episodes, some of them disagree and there are battles over it. I think that adds a whole new layer.”

As for the Gossip Girl cast members, many of them called the surprise “brilliant” and admitted they were surprised by the 180 when they initially read it in the script.

“I was like, ‘They in on it. They in on it against us!’ Because the characters don’t know, which is such an exciting moment because it really includes the audience and making them feel like they are involved on a secret,” Alexander said of her first reaction. “It wouldn’t be Gossip Girl without a secret. XOXO!”

“I was just as taken back as probably the audience will be. I mean, I was very much confused but I thought about it after and that’s such an interesting way to loop the audience in because when you think of a reboot, you think, ‘I already know how it’s gonna end,'” Peak said. “But now you don’t and you gotta wait to figure it out so quickly though. The first episode, it’s like done and done.”

Added Thomas Doherty, who plays Max Wolfe, a sexually fluid Chuck Bass type: “I was a little bit worried because I always thought that the enticing part of Gossip Girl was trying to figure out who Gossip Girl is but then I realized it doesn’t matter because it’s not about who Gossip Girl is. It’s about the life and [tribulations], so yeah a fun ‘gotcha’ moment… It’s really, really clever and unexpected, and it just adds a completely new dimension and a new dynamic to it. I think people are going to enjoy it.”

“I was shocked that Gossip Girl was revealed early on but it kind of is incredible because we all are today in this world,” said Rana Roy, who plays one of the Constance Billard teachers and is in on the GG ruse with Kate. “So it’s kind of reflecting the world and what we deal with life and how we affect people. It makes for a juicy story.”

To stay up to date on breaking TV news, sign up for ET’s daily newsletter.