Home » TV & Movies » How New 'Jeopardy!' Hosts Mayim Bialik and Mike Richards Did in the Ratings as Guest Hosts

How New ‘Jeopardy!’ Hosts Mayim Bialik and Mike Richards Did in the Ratings as Guest Hosts

Hint: Neither was the most watched

Sony Television decided that no one person replace Alex Trebek as “Jeopardy!” host — and so named executive producer Mike Richards as host of the daily syndicated version and tapped Mayim Bialik (“Call Me Kat,” “The Big Bang Theory”) to host the show’s primetime specials and spinoffs.

But how did the lucky two perform in syndicated-TV ratings during their respective tryouts for the job earlier this year? Heads up: Neither was the most watched guest host.

Ladies first. Bialik, who rose to stardom as the title character in 1990’s “Blossom,” is currently tied for sixth place (of 14) with former “Jeopardy!” champion Buzzy Cohen and TV doctor Dr. Oz. Each averaged a 5.1 rating, which made them middle-of-the-pack hosts.

As readers can see here in our study of all the “Jeopardy!” guest hosts to-date ranked by ratings, the rankings tend to abide by chronology. The reason for that is two-fold: 1) TV usage generally wanes as the television season (and the calendar) heads from fall to winter to spring to summer, and 2) the general intrigue in seeing someone other than Alex Trebek emcee the quiz show naturally declines as more fill-ins get a shot.

There is an exception to that second explanation, however. Green Bay Packers quarterback Aaron Rodgers bucked the timing trend(s) when he arrived in April. Hey, TV viewers love the NFL (and possibly State Farm Insurance commercials). 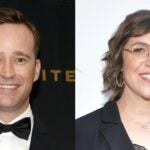 Richards’ 5.9 average rating ranks behind only Ken Jennings’s 6.0, and is ahead of Rodgers’ 5.6 (and everyone else’s viewership score). Still, it makes sense that Richards ranks second of all the guest hosts since he went second, occupying the podium from Feb. 22, 2021 to March 5, 2021.

Jennings, a consulting producer on the show and its most legendary champion, held the reins for a longer time than anyone else, starting on Jan. 11 of this year and wrapping up the week before Richards’ tenure began. The timing was both a blessing and a curse for Jennings.

Being the first guest host after Trebek’s posthumous shows aired drew lots of curious eyeballs. But having such a relatively long run (compared to the other guest hosts) weighed down Jennings’ ratings on an average basis.

Still, No. 1 is No. 1. And Jennings was widely regarded as the prohibitive favorite to replace Trebek, who died in November 2020 after a battle with pancreatic cancer. The most — or perhaps just the loudest — fan support, however, probably belonged to former “Star Trek” and “Reading Rainbow” star LeVar Burton — who belatedly got his turn at the podium last month.

Though Richards is a relative newbie to “Jeopardy!” fans — he joined the show as its executive producer last year, only months before Trebek died — he has extensive experience in the game show world and as a host.

Early on his career, Richards hosted reality series like “High School Reunion” for the former WB network, and “Beauty and the Geek” for its successor, The CW. Richards joined “The Price Is Right” in 2008 as a co-executive producer (where he was named in a work gender discrimination lawsuit in 2010). By the time he came aboard “Jeopardy!,” Richards had produced more than 4,000 hours of game show TV.

Ravi Ahuja, chairman of global television studios and corporate development for Sony Pictures, had high praise for both Richards and Bialik while touting the thoroughness of the process. “We took this decision incredibly seriously,” he said. “A tremendous amount of work and deliberation has gone into it, perhaps more than has ever gone into the selection of hosts for a show — deservedly so because it’s ‘Jeopardy!’ and we are following the incomparable Alex Trebek.”

Richards said he was “incredibly humbled to step behind the lectern and will work tirelessly to make sure our brilliant contestants shine in each and every episode.”

And Bialik credited her son with paving the way for her new gig. “I couldn’t be more thrilled to join the ‘Jeopardy!’ family,” she said. “What started out with my 15-year-old repeating a rumor from Instagram that I should guest host the show has turned into one of the most exciting and surreal opportunities of my life!”