Home » TV & Movies » How What We Do in the Shadows Made a Perfect Season by Taking Big Swings on Bat(!)sh*t Ideas

[Editor’s Note: The following article contains spoilers for “What We Do in the Shadows” Season 4, prior to Season 4, Episode 10, “Sunrise, Sunset.”]

As the old saying goes, you know it’s a great season of TV when vampire partygoers playing hot potato with Sofia Coppola’s decapitated head doesn’t even rank as the most memorable scene.

“We got lucky,” showrunner and executive producer Paul Simms said of casting the Oscar-winning writer in the cold open of Episode 9, “Freddie,” along with her husband and lead singer of Phoenix, Thomas Mars. “They love the show. Both of them are big comedy fans in a way you wouldn’t expect.”

To start the scene, Coppola and Mars are seated with fellow indie director Jim Jarmusch at Nadja’s, a vampire nightclub named after its founder/owner, Nadja (Natasia Demetriou). Looking over the menu, Coppola inquires about the $5,000 “celebrity special,” and — as is fitting for the filmmaker — she’s shown, not told, the answer. Two vampires chomp down on the inquisitive couple, sending blood arcing through the air, much to the delight of everyone watching — including Jarmusch, who thinks it’s all elaborate prop work. “I could never afford a gag like this,” he says, as Coppola’s head is ripped from her body and flung around the room.

Originally, the scene only featured Coppola and Mars — who Simms “knows a little bit, through our kids” — but the director felt she had too much to do. “Sophia was like, ‘I’m not so great at acting. I feel like I have too many lines — there should be a third person,’” Simms remembered. She then suggested the “Only Lovers Left Alive” director, saying “‘Jim Jarmusch would be funny’” — a savvy selection on a number of levels, considering Tilda Swinton, who starred in Jarmusch’s 2013 vampire romance, had a cameo in the first season of “What We Do in the Shadows.” Jarmusch even sticks around for the rest of the episode, curious to see if the rest of the night’s entertainment can live up to the “gag” at his very own table.

“But I still laugh,” Simms said. “The fact that we have this show where, at some point, you see Jim Jarmusch on a phone going, ‘Nah, that’s just some guy sucking his own dick’ — it’s just so weird and funny.”

“Weird and funny” is perhaps the simplest way to describe the endearing vibe of “What We Do in the Shadows.” The FX comedy created by Jemaine Clement and based on the 2014 film he wrote and directed with Taika Waititi has always embraced the ridiculous juxtaposition of centuries-old vampires going about their “ordinary” lives in modern-day Staten Island. Hearty jokes have been drawn from the foursome’s antiquated clothes and customs, relatable vampiric proclivities, and outlandish, expectation-shattering adventures. But for as steady, even overpowering, as the laughs may be, the sitcom rarely repeats itself. Unlike his good buddy Sheldon, Nandor isn’t going to get a laugh by routinely shouting “Bazinga!”

“Every season, we approach it like we’re just going to use up every [idea] we have and not think about what happens after the end of this season,” Simms said. “We’ll figure that out later. At some point, we let our brains recharge and do it all over again.”

But Season 4 took things to a new level. Top to bottom, premiere to finale, there’s a constant thrum of creative inspiration, where every scene is stacked with laughs and no idea is too outlandish. Season 4 just keeps going for it — and delivering. Imaginative ongoing plots like Nadja running a vampire nightclub and Nandor (Kayvan Novak) discovering a Djinn (Anoop Desai) are pliable enough to provide a reliable backbone for the full season. Yet there’s still room for spotlight episodes, like “Private School” and “The Wedding,” which devote their entire runtimes to single events, be it a simple school interview that goes magically off the rails, or a marriage ceremony that can’t quite get on track. Comparably minor flourishes like the Jersey Devil or the nightclub wraiths may be some viewers’ favorite bits, where others will be bowled over by the scope and scale of “Go Flip Yourself!”

Season 4 has it all. Some of these jokes are incredibly clever. Others are remarkably dumb. But they shine within a “Shadows” universe that’s conducive to big, weird swings, so long as they’re taken for the sheer fun of it.

And then there’s Baby Colin.

“The way you phrased it as ‘big swings’ is very accurate, because sometimes a big swing is a big whiff,” Simms said. “As late as the day before we started shooting the season, we weren’t quite sure exactly how we were going to do Baby Colin.” 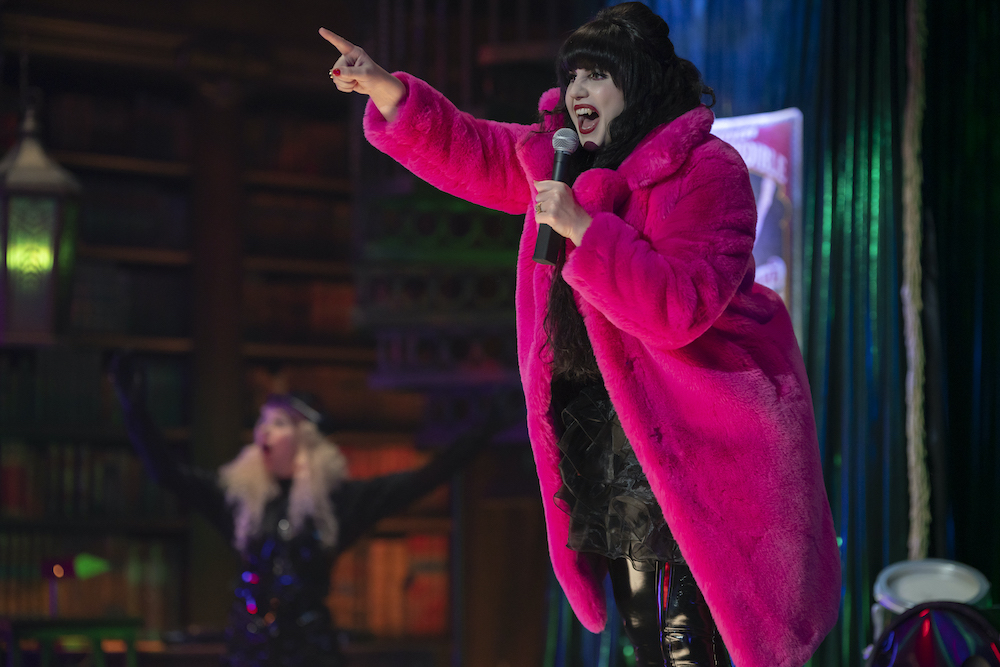 Natasia Demetriou in “What We Do in the Shadows”

For anyone still waiting to watch the fourth season, Baby Colin is kind of like Baby Yoda — an accepted nickname for a creature that may or may not be a baby, and may or may not be Colin. At the end of Season 3, the Colin Robinson (Mark Proksch) fans had come to know and love passed away. Energy vampires, it turns out, live until they’re exactly 100 years old, and then they promptly lie down, fart a lot, and deflate like a gooey balloon. Soon after, a smaller, baby-like Colin crawls out of the adult Colin’s hollowed-out corpse, and that’s where Season 4 begins.

Proksch plays Baby Colin at every stage of his rapidly aging life cycle — well, his face does, anyway. He’s the newborn Baby Colin, still covered in goo; the adolescent Baby Colin, training to be cool; the pre-teen Baby Colin, tap-dancing for you — and so on and so forth. Baby Colin is the biggest swing in a season of Aaron Judge-level long balls, and thus its most impressive home run.

“I tried not to think about it too much, but it was one of those things where if the Baby Colin thing hadn’t worked, we would be left with a pretty short season,” Simms said. “We had to shoot the whole season, and then shoot Mark’s head at the end for all that stuff. So we didn’t know till it was all done, if it was actually going to work, and if it hadn’t, I don’t know what I would have done.”

What elevates Baby Colin to such unforgettable heights is that no one involved in his creation rests on their laurels; just the idea of Baby Colin — his birth, his rapid aging, his various hairstyles — is funny by itself. The writers could’ve trusted that seeing Proksch’s face on a baby’s body would be humorous enough and let it carry his scenes. Similarly, Proksch could’ve trusted his bountiful wigs or awkward digital assemblage to do the funny work for him. Instead, the actor’s exuberant expressions and vocal performance stand out. They add to an idea that’s already hilarious, just as the writers’ persistent development of Baby Colin makes his emerging interests and hobbies feel like cherries on top of a very odd-looking sundae.

“I’ll let you in on a bit of a secret: I think actors do get a little tired,” Proksch said. “You get bored, almost, of playing the same character season after season. Getting to play Baby Colin Robinson came at the perfect moment to breathe some new life into the character for me.”

“As writers, you don’t want to get bored either, or feel like you’re falling back on something that works,” Simms said. “That’s been the the main [motivation] more than anything. With the Colin stories since Season 2 we’ve been like, ‘OK, we’ve seen him bore people, but there’s got to be more to him than that.’ We can’t just keep doing this.” 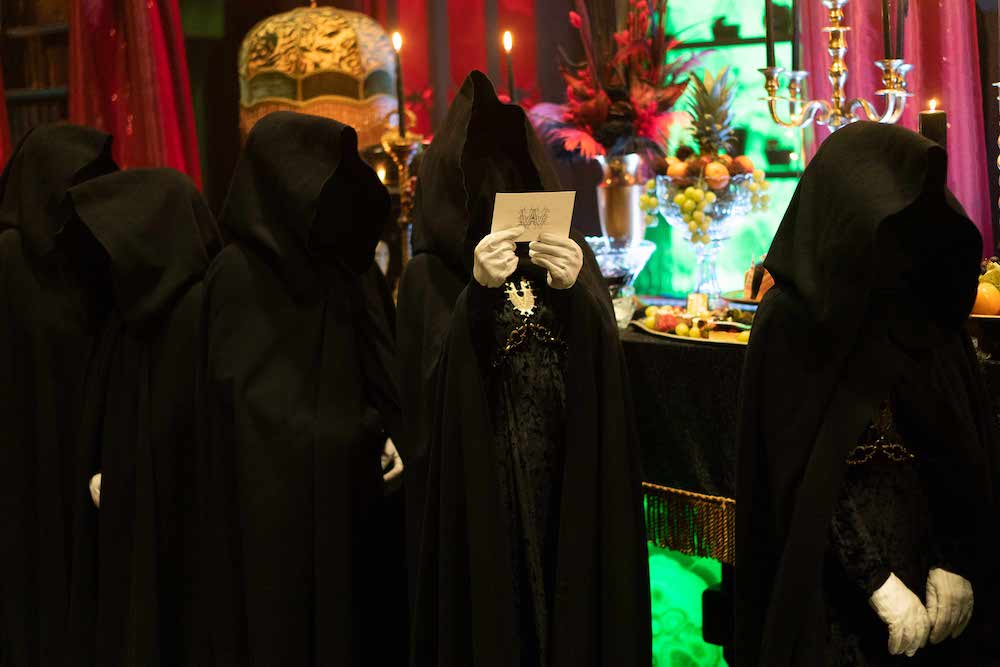 The Wraiths of “What We Do in the Shadows”

“If you’re bored, just use your imagination” is pretty close to what parents tell their kids every day, but it’s a lesson Simms and his team take to heart. Even when they strike gold, they’re reluctant to reenter the mine. They’d rather tunnel elsewhere, and they trust they can find something just as good — or better — in an entirely new spot.

In the Season 4 finale, Guillermo (Harvey Guillén) vents to the camera that “nothing ever changes around here.” It’s a valid personal complaint, as Guillermo has always been taken for granted among his vampire family, but it’s also a striking remark in context. So much happened this season, to say nothing changes is laughably preposterous, but his words also speak to the nature of sitcoms. Traditionally, TV comedies operate within set parameters, where the main characters, the setting, and more elements don’t change. Audiences take comfort in returning to the people they enjoy and the hijinks they expect. Not changing is part of the appeal.

When asked about Guillermo’s line, Simms said, “This is such a weird coincidence: My son just said to me this morning, ‘You’re 56.’ I said, ‘Yeah,’ and he’s like, ‘So you’ve lived five decades?’ And I’m like, ‘Yeah, more than that.’ And he goes, ‘Doesn’t it get boring?’”

“I didn’t know how to answer. First, I gave the dad answer, which is there’s something interesting about each age. Then I think back on the times of my life when I think, ‘This is boring,’ and we just get used to things happening. That’s part of the fun of writing the show with these sort of eternal characters, who’ve been around forever. It just highlights, as humans, how we never really change, have so many opportunities to change, and then when we do change, we don’t really notice it.”

“What We Do in the Shadows” is a sitcom.  The main characters are all alive and well. The house has been rehabbed (slightly), but it’s still their home. Laszlo and Nadja are hotheaded wild cards, Guillermo and Nandor are the bickering odd couple, Colin Robinson is, and will always be, Colin Robinson. The challenge then, for the writers, is to put on a show within these parameters, and in Season 4, the “Shadows” team makes that very, very difficult assignment look easy. They understand their dynamics, setting, and characters quite well, and then elevate everything else to absurd, mesmerizing extremes.

Fans may think they want to see Jackie Daytona again. They may think they want another episode of “Go Flip Yourself!” or another season with Baby Colin. But what they really want is to re-experience how they felt when they were first introduced to those brilliant, bonkers ideas. Frankly, it’s astounding how often “What We Do in the Shadows” can conjure that feeling. Even if nothing really changes, you’ve never seen anything quite like this.

“What We Do in the Shadows” Season 4 airs on FX and is available on Hulu. The series has already been renewed for Seasons 5 and 6.