Javi Marroquin is back on Instagram after he went radio silent following backlash after Kailyn Lowry accused him of trying to hook up on Teen Mom 2.

Just a few weeks ago during an episode, Kail and Javi fought because he didn’t want to drive halfway to pick up their son Lincoln, despite previously agreeing to do so.

Kail became so frustrated with him that she told a producer Javi had tried to hook up with her.

Kail described his willingness to drive to her house for sex, but not to pick up their son. She also showed text messages that proved Javi tried to come by.

Following the news, Javi’s fiance Lauren Comeau went back to Maine to spend time with family and took their son Eli with her.

While Lauren has yet to publicly acknowledge the hookup claims or her current relationship status, Kail issued a public apology to Lauren on Twitter after the episode aired. 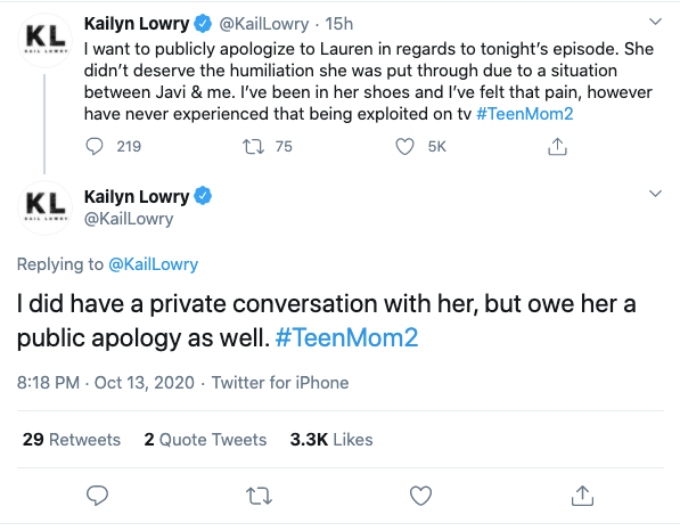 Lauren started posting pictures and videos from Maine to her Instagram stories while Javi turned to prayer to help guide him through the difficult time.

Lauren is not the first woman on the receiving end of Javi’s cheating and poor decisions.

When Javi was married to Kail, rumors spread that he was being unfaithful while deployed in Qatar. The couple eventually divorced and Javi later revealed that the rumors were true.

Shortly after their divorce, Javi met Lauren, but their relationship had a rocky start as the couple continued to be on again-off again. He dated Briana DeJesus, another Teen Mom 2 star, during one of their breaks.

His relationship with Briana only lasted a few months, but he continued to hook up with Kail while they were together. The drama played out during one of the Teen Mom 2 reunions and Kail and Javi hinted that they were still involved with one another.

After he officially broke things off with Briana, Javi reunited with Lauren, and they eventually became engaged after she gave birth to their son.

Sadly, only a few months after their engagement, Javi was reportedly caught cheating with another woman in their home. He posted a long apology to Lauren on social media swearing to be a better man.

Lauren eventually took him back, but it looks like the latest hookup accusation from Kail could have been the last straw for the couple.

Even though Kail outed him as a cheater, she recently went on her Coffee Convos podcast and described what she referred to as a “weird unspoken loyalty” to Javi.

She said, “I have a weird, unspoken loyalty to him that I have not figured out yet. I would always wish the best for him…He has this great image. He’s a great guy, he’s a great dad, he’s a hard worker, and he is all those things.”

Kail described Javi in a positive light, despite the fact that he has betrayed her and the other women in his life numerous times.

While he may be back on Instagram, Javi has yet to post anything new, which leaves fans wondering the current status of his relationship with Lauren and whether or not he will finally be able to change his ways.