Deep in the bowels of Wall Street, the legacy of Kim’s Video lives on. At the Alamo Drafthouse’s new downtown Manhattan location, just a few blocks from the New York Stock Exchange, the arrival of a movie rental store that hasn’t fully been appreciated for 12 years seems like some sort of anti-capitalist lark.

For Alamo Drafthouse founder Tim League, however, the decision to ingest the collection of roughly 55,000 DVDs and VHS tapes once housed at the iconic East Village mainstay Kim’s Video & Music is an experiment with no real downside. “Free movie rentals is not a great business model, but we have the space,” League said in an interview last week, a few hours before Kim’s reopened in the lobby of the new location. “We’re already paying the rent, we already have people at the box office, and we have air conditioning. It’s a unique opportunity for us to be able to offer this service.”

The saga of Kim’s speaks to the lasting appeal of relics from an analog age. But it’s also story of the immigrant filmmaker who built the library — and still lays claim to its future. Youngman Kim, the eccentric figure behind the name, has been on a journey of self-discovery as strange and multifaceted as his nomadic collection.

Much has been made about the surreal journey of Kim’s, which closed the last of its locations in 2009, and wound up tucked away in the remote Sicilian town of Salemi as part of an ill-conceived cultural initiative. That fate spawned several quixotic journeys: Former film critic Karina Longworth went to Salemi for an extensive piece 10 years ago, casting director Jennifer Venditti once planned an elaborate movie about the people she met there, and more recently, filmmaker David Redmon has been gathering footage for an upcoming documentary. Redmon also helped Kim’s find its new home with the Drafthouse, which has been acquiring old rental collections around the U.S. for years. When the collection was unveiled last week at the Manhattan location, renamed Kim’s Underground, many of the people from that journey — including the mayor of Salemi — attended the event to mark the start of a new chapter. But the original ethos remained intact.

“The idea is to make the collection accessible and get people excited about taking crazy adventures,” League said. “Maybe you’ll buy a drink or see a movie and on the way out you pick up some oddities from Kim’s and continue the adventure at home.”

As it stands, the collection serves as a nostalgic signifier of the days when snobby movie store clerks curated shelves of under-appreciated cinematic gems. Some 15,000 titles are currently on display at the Drafthouse, and visitors can also rent both VHS players and all-region DVD players to play their picks on. The current resting place of the collection reflects Kim’s mandate that any home for his collection ingest all 55,000 titles in their entirety, make at least 3,000 available to the public at the time, and add new titles to the collection.

League, with the aid of preservationists from the audiovisual community, agreed to these terms with a loose contract. “If I were to no longer offer the video store like I am, I suppose the cycle could continue and I could be the next Salemi,” League said. “We’re in the service of Mr. Kim. We have a contract to uphold in terms of bringing this collection back to the city. If I fail on my terms, he has a right to take it back.” 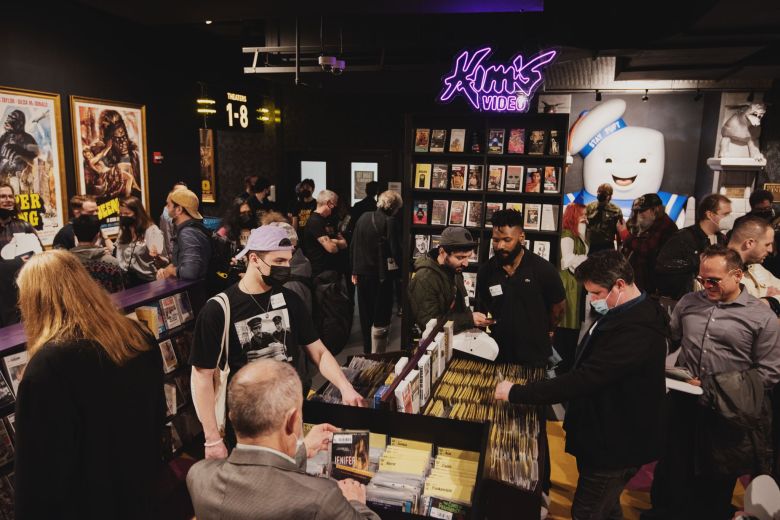 Kim’s Video at its new home in downtown Manhattan

The reclusive Kim — or “Mr. Kim,” as proper Korean etiquette would have it — has gone through many entrepreneurial lives. The initial Kim’s Video was an outgrowth of his laundry store in the East Village, where VHS tapes were sometimes available in the back. In the heyday of the store, Kim attempted to launch his career as a filmmaker with “1/3,” an eerie, wordless thriller about a Buddhist monk who lives next door to a prostitute and grows obsessed with her grimy life. It shows the potential of a gritty New York filmmaker with an eye for the unique power of cinematic storytelling. When the last store closed, Kim decided to try and raise money for two sequels to “1/3,” both of which would be silent. In a phone interview last week, he recalled that weird journey, which isn’t finished yet.

Over the past decade, Kim has been struggling to get another business off the ground. “I was in Mexico selling LED street lamps to the government for three years,” he said. “I thought that could help me come back to filmmaking, but it really didn’t go as I expected. It was very difficult to deal with Mexican officials.” These days, Kim said, he was focused on “real estate and financial consulting and a few other things to build up my financial backing.”

But he remained intent on making those movies, a desire that helps explain the idiosyncratic nature of his journey. Kim grew up in the early 1960s in Gunsan, South Korea, on the outskirts of an Air Force base. As a child, he befriended the wife of an Air Force pilot, who screened 16mm movies on her wall. The first one he saw was a Charlie Chaplin short. “I couldn’t believe my eyes,” Kim said. “Back in those days, it was impossible to watch movies in Korea. I felt blessed. Ever since I saw that movie, I kept telling my mother that I wanted to make movies.”

Instead, Kim wound up following a more traditional rags-to-sort-of-riches plight, immigrating to America in young adulthood and cobbling together a business that reflecting his underlying passion. Kim’s Video became the ultimate platform for exposing audiences to the shock of discovering movies that first impacted him all those years ago. “We used to say that we educated our customers,” Kim said. “We put our new acquisitions on the wall to see how people responded, and OK, some people didn’t even touch it if they were not familiar with the titles. But some of them, one after another, they would talk about it and they talk to each other and they would start to love it. That’s how we did it. So hopefully Drafthouse also does that.”

Over the years, the store served as the Mecca of burgeoning movie snobs like filmmakers Quentin Tarantino (who thanked the store the credits to “Kill Bill”). It hired clerks like Todd Phillips, Alex Ross Perry, and Kate Lyn Sheil. This writer perused the store often and embraced the piercing stare of the judgmental staff behind the counter, while browsing shelves sorted by directors and movements and outré sensibilities that may as well have been invented on the spot. “Kim’s Video took the initiative to introduce new cultures to audiences,” Kim said. “There was always something that people didn’t recognize. The bigger picture is the culture that travels from community to community.”

The collection is certainly an opportunity to encounter unexpected titles. On a recent visit this past week, I marveled at the range of possibilities on one shelf, where a collection of titles by little-known Chicago filmmaker Peter Thompson sat a few rows away from “Soccer Dog: The Movie” and the 1967 surf film “Blue Surf-Ari.” DVDs in plastic sleeves were available nearby, sorted by directors ranging from Akira Kurosawa to Derek Jarman. League said his team hoped to get a website up and running where people could peruse the collection from home, “but we recommend flipping through ‘em old school.”

For the Drafthouse founder, the Kim’s experiment is an extension of his longstanding effort to transform the movie theater into a communal gathering place impossible to replicate at home. “We compete for out-of-home dollars,” he said. “We have to offer something compelling — whether that’s a cool bar or a weirdo collection.”

It’s too early to say whether Kim’s will galvanize moviegoers who stumble onto its shelves with the same anarchic energy that put it on the map. As a site-specific experience, however, it’s an undeniable blast to browse those shelves — and something of an archival miracle that they’re even there in the first place. Whatever happens now, Kim said he was happy to see the assemblage intact. “The collection was really built by the recommendations from customers and friends, not only from my own tastes,” he said. “Everybody agrees that we had a very unusual kind of collection. It’s a public asset.”

He was less concerned about how the Drafthouse maintained specific entries than the way they functioned as a whole. “The collection is secondarily important,” he said. “Primarily, the legacy of Kim’s Video is the connection between East to West, underground to the mainstream, and independent filmmakers to Hollywood. It must make that connection.” He chuckled, then added: “This has been a very long story.”