Linda Fairstein, a prominent sex-crimes prosecutor who became a successful crime novelist, was dropped by her publisher after a Netflix miniseries renewed focus on her role in the wrongful conviction of five teenagers for a brutal rape.

Since the series, When They See Us, premiered in May, Fairstein, 72, has been the target of public outrage, including online petitions and a #CancelLindaFairstein hashtag. Last week, she resigned from a number of prominent boards, including that of Vassar College, her alma mater. 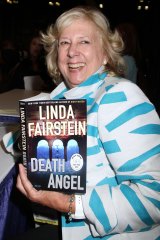 On Friday, a spokeswoman for Dutton, the Penguin Random House imprint that published Fairstein, said that she and Dutton "decided to terminate their relationship". A person with knowledge of the situation, who spoke on the condition of anonymity because the details were confidential, said that Dutton was buying out Fairstein's contract.

In 1989, a white woman was savagely raped and beaten in New York City's Central Park, where she had been out for a jog. Five black and Latino teenagers – Korey Wise, Raymond Santana, Kevin Richardson, Antron McCray and Yusef Salaam, who became known as the "Central Park Five" – were convicted based on confessions that were full of contradictions and lacking in crucial information, and which the boys said were coerced. No forensic evidence connected them to the crime, and DNA evidence that was collected did not match any of the five.

In 2002, a man named Matias Reyes confessed to the crime, an admission confirmed by DNA, and he said he had acted alone. The convictions against the other men – each of whom had already served several years in prison – were overturned.

The Netflix series is a dramatised account of the case and shows Fairstein, who is played by Felicity Huffman, determined to see the boys convicted, regardless of inconsistencies and evidence that suggested their innocence. Fairstein has called her portrayal "grossly and maliciously inaccurate" and threatened legal action. Ava DuVernay, who directed the series and was one of its writers, has not commented on Fairstein's complaints.

After running the Manhattan district attorney's sex crimes unit for 25 years, Fairstein retired and turned her attention to writing. She has published 24 books, including 16 that reached The New York Times bestseller lists, according to her publicist, Laura Rossi. Her most recent novel, Blood Oath, came out in March.