Detective Superintendent Ian Buckells may have been identified as the OCG puppet formerly known as H, but collaring him ultimately felt like a hollow victory. Buckells turned out to be just an over-promoted twerp, motivated by greed, conveniently placed to ensure these crime gangs could go about their business unimpeded. The real corruption, it seemed, went right to the top.

Nothing AC-12 had uncovered – and they’d been beavering away at this since 2012, remember, originally in a quiet corner of BBC Two – was ever going to stamp it out. Dodgy Chief Constable Philip Osborne had seen to that.

Being stamped out instead was the power of AC-12 itself.

Ted was being forced into early retirement, while Osborne was “restructuring” the anti-corruption units – putting close pals in all the top jobs.

As viewers, this clearly wasn’t the result we’d hoped for. For one thing, we were hoping to see Ted strut into the office of DCS Patricia Carmichael and plant a custard pie in her face.

But Line Of Duty has never gone in for obvious crowd pleasing. So a neat, happy ending would have felt odd.AC-12’s relative failure, the sense of it being thwarted by the powers that be, was far more in keeping with what we’d expect from the show’s writer Jed Mercurio.

That’s assuming, of course, that this really is the end.

While last night’s episode certainly had an air of finality to it, Mercurio still hasn’t said for sure that it’s over.

If it’s just a question of money, I suggest the BBC showers him with it, because surely there’s scope for at least one more series.

After all, what on earth will Ted do in retirement? This is a man who lives and breathes anti-corruption. He can’t possibly be happy just to leave it at that, to accept that bad guys have won. 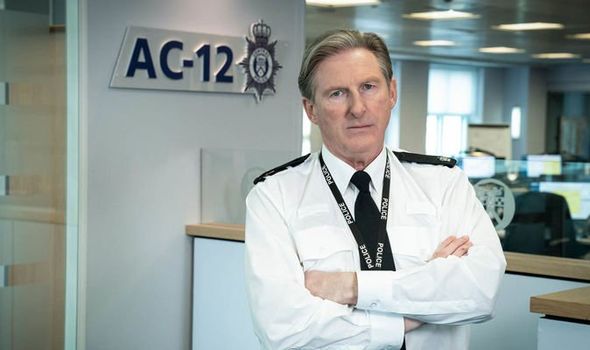 And that’s absolutely true. AC-12 mugs,T-shirts, maybe souvenir tea towels,Ted’s certainly spotted a gap in the market there. I wish him well. But first, he’d surely relish one last crack at bringing the real rotten rozzers to justice.

And now that he’s out of uniform, he could play to his own rules, maybe using Kate and Steve as insiders, still loyal to their old gaffer. Is that such a mad idea?

Of course, we did establish that Ted had bent a few rules himself, giving £50,000 in dodgy cash to John Corbett’s widow Steph.

Kate and Steve had forced him to own up. But his explanation – that he’d done it “by way of atonement”, having inadvertently exposed Corbett as an undercover office, almost certainly costing his life – seemed to satisfy them.

Likewise, the fact he’d done it after discovering that Corbett was “the son of a woman I cared deeply about many years ago.” Despite its frustrations, last night’s episode wasn’t without its satisfying moments. It was particularly good to see Buckells’ fate being sealed by his ropey spelling.

It was he who’d repeatedly misspelt “definitely” in a series of incriminating communications, amounting to a clue that proved his undoing. Not that viewers in years to come, watching Line Of Duty reruns, are likely to buy that.

“Pulling up a guy on his spelling?!” they’ll cry.

But most tremendous of all was the resounding speech Ted gave to Carmichael before leaving the building, choking back tears of frustration as he railed against “institutional failures” and “the wilful blindness” of those in power.

“It devastates me,” Ted cried, “that we have stopped standing up for accountability, we’ve stopped caring about truth and integrity.”

The words of a defeated man, do we think? Or maybe, just maybe, of a man who still has unfinished business..?