The new strain, first identified in the U.K., appears to spread more easily than the standard coronavirus 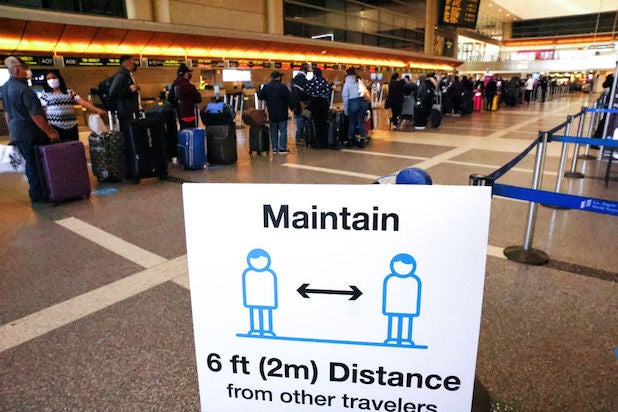 Travelers wait in line to check in for a flight at the Los Angeles International Airport (LAX) amid a COVID-19 surge in Southern California on December 22, 2020. (Mario Tama / Getty Images)

A new, mutated strain of the coronavirus that was first identified in the United Kingdom has been detected in Southern California, Gov. Gavin Newsom said Wednesday.

“Just an hour or so ago, we were informed that this new variant, this new strain that we’ve identified obviously from the United Kingdom … has been identified here in the state of California, in Southern California,” Newsom said during a virtual conversation with the nation’s top infectious diseases expert, Anthony Fauci.

Fauci said he wasn’t “surprised” to hear that California had a case of the new strain, which appears to spread more easily than the “standard virus” that has been spreading in the U.S. all year.

Still, Fauci said there hasn’t been any indication that the mutated strain is stronger when it comes to its ability to “make you sick or kill you.”

“It’s able to bind to the receptors on cells better and therefore is transmitted better. There’s no indication at all that it increases the virulence,” Fauci said. “It doesn’t seem to make it more strong in that regard. In addition, it doesn’t seem to evade the protection that’s afforded by the antibodies that are induced by vaccines.”

While it’s not immediately clear where in Southern California the new strain was detected, Fauci said he expects to see reports of the new strain from other states soon. (The first reported case of the mutated strain in the U.S. was detected in Colorado on Tuesday.)

“If you have that much of a prominence of this in the U.K. with all the travel, not only directly to the United States but through other countries intermittently,” Fauci said, “I don’t think that the Californians should feel that this is something odd. This is something that’s expected.”