Never Have I Ever‘s Devi Vishwakumar spent Season 1 of the Netflix dramedy grappling with grief from her father’s unexpected death. She made missteps. She navigated tricky relationships. She drunkenly tried to commune with an angry coyote. But even after all the progress she made, series star Maitreyi Ramakrishnan says, don’t expect a fully evolved Devi when Season 2 drops on July 15.

“She dumped her dad’s ashes in the oceans in Season 1, and she’s starting to confront her grief. But in Season 2, its not that it’s just, ‘OK, done. Thanks for hanging out, Mohan, goodbye now,’” Ramakrishnan tells TVLine, referencing Devi’s dad (played by Heroes alum Sendhil Ramamurthy), who continues to appear to his daughter in dreams. “Because that’s not how grief works. That’s not how that happens. So it’s nice to see her have to feel and cope with that.”

The show’s sophomore season opens right after the events of the Season 1 premiere, with Devi and Ben kissing in his car after Devi’s family spread her father’s ashes at the beach. Soon after, though, Paxton apologizes for icing her out after their make-out session in his car… and things get even more complicated from there.

As we know from the trailer, an offhand comment from one of Devi’s closest friends sets up a season-long arc in which our girl tries to juggle both swimmer/slacker Paxton and smug brainiac Ben as romantic partners — because why choose?

“My brother has a really good theory that if Fabiola never said, ‘What are you going to do? Date two guys at once?,’ [Devi] wouldn’t be in this situation,” Ramakrishnan says, laughing. “For such a smart girl, she can be so dumb at times!” 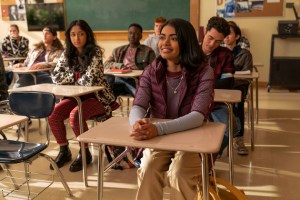 The season also finds Devi’s mother, Nalini, thinking in a different way about her decision to move back to India in order to be closer to their family. (We’re not saying that has something to do with the addition of Common as a dermatologist with an office in Nalini’s building, but we’re also not saying that it doesn’t.) Menawhile, Devi’s cousin, Kamala, encounters unexpected obstacles in both her academic and personal pursuits.

But all of this is on Devi’s periphery, as she keeps the plates spinning on the Ben-Paxton situation and encounters Aneesa (played by Megan Suri, Atypical), whose introduction “shows that jealousy that happens, that POC-to-POC tension, when you feel like there isn’t enough room for the both of you.”

Don’t worry, though: All of those sessions with Dr. Ryan have made some impact on Ramakrishnan’s all-over-the-place alter ego.

“She’s now actually trying to be a better person,” the actress says.

Are you planning to watch Season 2 of Never Have I Ever? Sound off in the comments!