Life is quite literally a beach in M. Night Shyamalan’s “Old,” a go-for-broke “Twilight Zone” riff about a family who find themselves trapped in a sandy enclave where time passes so fast that a six-year-old in the morning will go through puberty by lunch, and a grandmother in the first act has almost no chance of being around for the third. Borrowed from the 2010 graphic novel “Sandcastle” by Pierre Oscar Lévy and Frederik Peeters, it’s the sort of unsettling idea that can trigger a wave of existential anxieties (and/or parental ones, which are often the same thing) just by thinking about it.

And yet Shyamalan’s very silly new movie — his best since “The Village,” but still a pale imitation of the slow-burn psychological thrillers that once earned him modern history’s most iconic Newsweek cover — isn’t nearly as fraught-provoking as its nature would suggest. Rather than allow this story to unfold at the real-time pace that its premise demands, Shyamalan opts instead for a hurried (if impressively perverse) series of cheap thrills that emphasize the body horror of aging over the more profound terror of feeling the years pass by.

The result is a silly, well-acted piece of schlock that offers a decent time at the movies instead of the awful one that it promised us. And while there’s obviously some fun to be had in a film where “The Neon Demon” star Abbey Lee plays a trophy wife who goes full “Kuroneko” (complete with a billowing hooded kimono) on a bunch of teens because she gets a few wrinkles, Shyamalan’s latest — like virtually everyone in it — gets old fast.

Subtlety has never been one of Shyamalan’s gifts, but “Old” is so obvious that even Rod Serling would probably tell M. Night to dial it back a bit. We meet the bickering Capa family as they arrive at the tropical resort that mom Prisca found on the internet one day (she’s played by Vicky Krieps, who sets the tone for a movie in which every member of the cast is wonderfully overqualified), and the snippy conversation they have in the van makes it hard to believe that such ostensibly smart people could be stupid enough not to realize they’re in a campy horror movie.

Every single line of dialogue is the Shyamalan equivalent of a slasher victim announcing that they’re just gonna lose their virginity in the spooky garage real quick, but they’ll definitely be right back after that. “You have such a beautiful voice,” Guy Capa (Gael García Bernal) tells his pre-teen daughter Maddox (Alexa Swinton), “I can’t wait to hear it when you’re older.” A beat later, he turns to his younger child Trent (Nolan River) and regretfully informs him that he’s too young to scuba. For his part, Trent is a hyper-loquacious adult man trapped in a six-year-old’s body; he sizes up his weary mother and declares, “The spontaneity has been stripped from her.”

It would be a funnier bit if not for the fact that all of Shyamalan’s characters talk as if they’ve been abducted by aliens, a feeling that’s only enhanced by this film’s clinical framing and zoological sense of remove. “You’re always thinking about the future!” Prisca snarls at her actuary husband as soon as they get a moment alone inside of their glass villa. “You’re always thinking about the past!” Guy snaps back at his museum curator wife. “You work in a god damn museum!” Listen closely, and you can all but hear the aliens excitedly scribbling away in their notes.

Okay, maybe aliens aren’t to blame for this one. After all, it’s Shyamalan himself — once again cameoing as the instrument of his characters’ suffering — who drives the Capa family to the special private beach where they’ll get to spend the day with just a small handful of other lucky resort guests. And never let it be said that Shyamalan doesn’t have a gift for creating memorably bizarre redshirts, most of whom are so wooden and broadly sketched that it’s more believable to hear them compare notes about the temporal properties of the beach’s rock wall than it would be to watch them buy groceries. 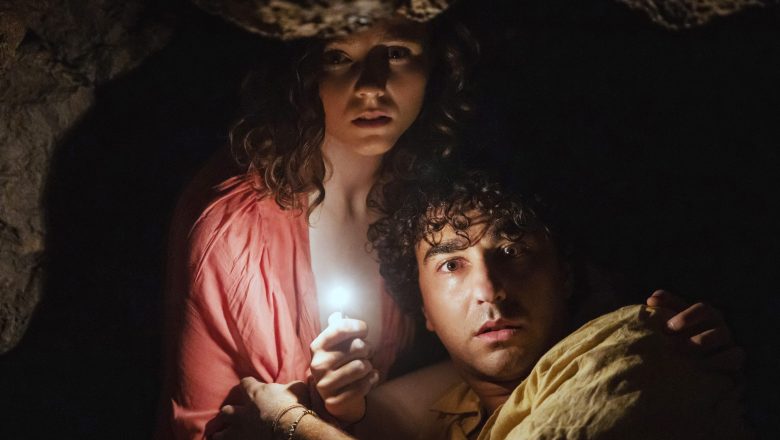 Half the fun of “Old” comes from seeing world-class actors try to wiggle out of Shyamalan’s writing like straitjacketed musicians in an underwater vault. British smarm machine Rufus Sewell has the time of his life as a cardiothoracic surgeon whose mental health deteriorates faster than his body, and it’s worth the price of admission just to witness the character’s strange fixation on a certain Marlon Brando movie (especially because it’s definitely not the one you’d guess). “The Neon Demon” star Abbey Lee makes a meal out of Sewell’s young trophy wife. Aaron Pierre, in a wild change of pace from his earth-shaking lead performance in “The Underground Railroad,” shows off his versatility in the role of an emotionally grounded rapper called Mid-Sized Sedan (Shyamalan is just raining threes with that one). Neither the great Ken Leung nor Nikki Amuka-Bird get quite as much to do in their roles as a kindly nurse and his seizure-prone wife, but they manage to find the integrity of every scene they’re in even when Shyamalan doesn’t seem to know where it went.

For all of its clumsiness, however, there’s no doubt that “Old” is supposed to be funny, even if Shyamalan reliably earns more laughs from our discomfort than he does from his own zingers. The film is full of guffaw-worthy beats that start with your hand over your mouth and end with your head shaking in your hands. Does Prisca only wrap her mind around the time-bending premise when she notices her son’s newly bulging genitals? Of course. Is that the most “I can’t believe he went there” moment in a Shyamalan movie where Maddox and a young girl he meets age into Alex Wolff and Eliza Scanlen as their child-like intellects are transplanted into the bodies of horny teenage virgins? Of course not. They don’t give Oscars for how brilliantly Scanlen navigates the strangeness of being a child and an adult at the same time, but maybe they should.

There are other sorts of gross-out moments in store for you, most of which ironically prove effective because of Shyamalan’s visual restraint. The aging effects are subtle enough that the other effects — a twisted limb here, an impromptu surgery there — are able to draft off their residual verisimilitude, which goes a long way in a movie that fails to sustain much interest in the mystery behind its horrors, but still builds to a coda that explains them all in imagination-deflating detail. “Old” insists that trying to flip the hourglasses of our lives is a futile waste of the brief time we get in this world, and there’s something vaguely poignant about watching these characters make peace with that idea and/or die trying. But the emotional undertow of Shyamalan’s story feels grafted onto a film that scurries from one supernatural nightmare to the next so fast that none of them feel rooted in a place of shared reality.

Scary as it is to imagine how your body and all of its ailments might go haywire if you sped through 10 years in the span of five hours — and sick as that can be to watch — Shyamalan completely fails to connect such horrors to the mortal fears we live with every day. Shyamalan understands that nobody gets out alive, but he never wraps his head around why everyone keeps trying. The central point of his film eventually comes to double as the biggest knock against it: If life were really so short, it would be easier to appreciate the time that we’re given. By the time “Old” is over, the strongest feeling it leaves us with is that it just got 108 minutes shorter.

Universal Pictures will release “Old” in theaters on Friday, July 23.