Boris Johnson is leading the Tory leadership race, having secured the backing of 114 MPs in the first round of voting last week. But speaking after leadership contender Rory Stewart’s appearance on the show, ITV host Piers Morgan hit out at Boris Johnson and said: “We have obviously invited all the other candidates but Rory is the one that came in. You might think that that is leadership. You might think Boris, hiding away and refusing to answer any questions about anything, is not leadership.”

You might think Boris, hiding away and refusing to answer any questions about anything, is not leadership

Mr Morgan later blasted the former London mayor and said: “Boris even ducked last night’s TV debate where he was called out by Conservative candidates for not turning up.”

The ITV host demanded to know why the former Foreign Secretary was such a “gutless coward” and using other MPs to represent him in the media.

He added: “Why is he a gutless coward? Why doesn’t he come out and defend himself and explain how he will sort out Brexit, answer difficult questions? Why is he sending out, with respect to you, the foot soldiers to do all the fighting for him? It is a bit cowardly, isn’t it?”

In response, Boris Johnson supporter and former Tory leadership candidate James Cleverly said: “Whilst I was talking to you in the studios, he was talking to MPs in Westminster. He was successful and I wasn’t. 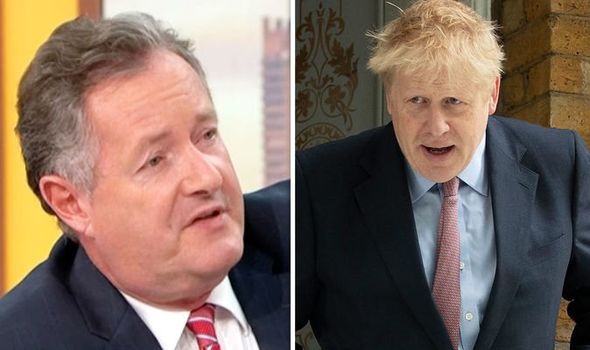 “So, I think I am big enough to recognise that actually he had the right strategy and was talking to the Members of Parliament who are the people voting at this stage of the competition.”

Later in the interview, Mr Morgan blasted: “We haven’t seen Boris for nearly two years on this programme. We would love to interview Boris and I think many other people would too.

“I just think there is something a little bit gutless and cowardly about him sending you out to do all the difficult stuff because you did all of this for Theresa May.

“I mean, you must be warn out by all of this, aren’t you? Defending the indefensible.”

Mr Cleverly responded and claimed he is “proud” of the party he represents.

The outspoken Old Etonian, who is on course to win 150 votes in Tuesday’s second elimination round, was on Sunday further buoyed by news Conservative Party heavyweight Matt Hancock is now backing his bid to become Prime Minister.

Health Secretary Mr Hancock – who was eliminated from the contest last week – said Mr Johnson was the “unity” candidate to bring the divided nation together, the Sun reports.

Of the six candidates remaining in the race, leadership hopeful Rory Stewart got the least votes in the first ballot of Tory MPs, taking home 19 votes.

This is in stark contrast to frontrunner Mr Johnson, who swept up 114 votes.