The ‘West Side Story’ stars, who bring home Best Actress in a Musical or Comedy and Best Supporting Actress in a Motion Picture respectively, celebrate their wins on their social media accounts.

AceShowbiz –Rachel Zegler and Ariana DeBose are celebrating their win at the 2022 Golden Globe Awards. The “West Side Story” stars took to their social media platforms to express their gratitude after taking home their first award from the annual prize-giving event.

Rachel, who won the award for Best Performance by an Actress in a Motion Picture – Musical or Comedy, made use of her Twitter account on Sunday, January 9 to share her reaction after her name was listed on the winner list. She tweeted, “I got cast as maría in west side story on 1/9/19. and i just won a golden globe for that same performance, on 1/9/22.” She concluded, “Life is very strange.” 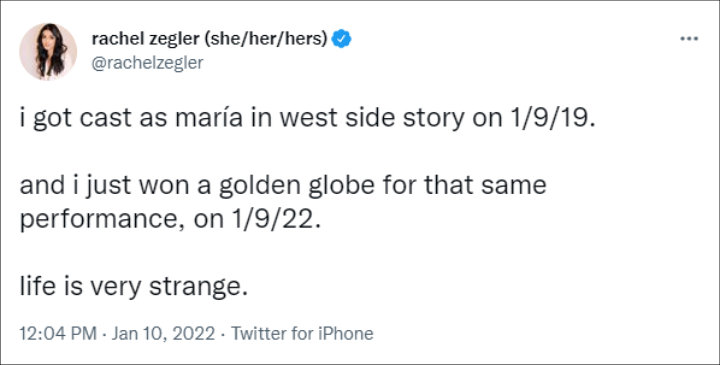 Not stopping there, Rachel posted a video on her Instagram Story that saw her shedding her tears. In the short clip, the Maria depicter in Steven Spielberg’s film also mouthed a voice that could be heard saying, “What the f**k is going on?” seemingly shocked by her win.

In the meantime, Ariana took to her Instagram page to celebrate her win. “There is still work to be done, but when you’ve worked so hard on a project- infused with blood, sweat, tears and love- having the work seen and acknowledged is always going to be special,” the actress, who won Best Performance by an Actress in a Supporting Role in any Motion Picture, penned. She added, “Thank you,” along with several hashtags, “#latinosinfilm #afrolatina #queertalent #musicalsrock.”

Many fellow actresses left congratulatory messages in the comment section, including Rachel. The “Shazam! Fury of the Gods” actress wrote, “Ari,” adding a red heart emoji. Meanwhile, Eden Espinosa gushed, “Just as it should be. Beyond proud of you hermana.”

Briar Nolet commented, “congratulations love! [red heart emoji],” while Kristin Chenoweth penned, “So happy for you and the movie!” In the meantime, Leisha Hailey exclaimed, “Incredible!!!” including a slew of clapping hands emoji.