Home » TV & Movies » RNLI crewman on close rescue – ‘A few yards either side, they would have been swept away’

And for the unfortunates who find themselves capsized, adrift or cornered by an incoming tide, their best hope of survival lies with the brave volunteers of the Royal National Lifeboat Institution (RNLI), who regularly risk their lives for strangers at the bleep of a pager. This largely unpaid army of men and women, from priests and farmers to poets and bakers, came to the aid of 9,300 people last year, saving the lives of 374 people. And some of these dramatic rescues were captured on the crew’s own cameras for the BBC Two documentary series Saving Lives at Sea, currently back on the air for its fifth series.

Tonight’s episode features two incidents that would almost certainly have ended in tragedy were it not for these everyday heroes.

Experienced kayakers Molly Basson, 19, and her father Chris Coley, 44, nearly drowned last September after their boats overturned in treacherous rip currents, stranding them on a small, slippery rocky outpost off the Pembrokeshire coast in west Wales.

But after setting off in the morning sunshine, they hit a notorious stretch of water along a reef of rocks called “The Bitches”, a tidal race causing dangerous conditions and named for its long association with shipwrecks.

“One minute the water was almost bubbling and then all of sudden it would go flat like you weren’t moving at all even though it’s pushing you along,” Molly recalls.

She and her dad managed to paddle through safely to Ramsey Island. On their return, however, the tide was flowing south towards Saint Bride’s Bay and the open sea.

“We were being pushed sideways, the water wasn’t letting us go through at all so we went through a big opening between the rocks near to the beaches,” says Molly.

The pair attempted to move towards a nearby rock but as they did so, Chris’s kayak was capsized by the swell, which then overturned Molly’s boat.

He managed to clamber onto the rocks but realised his daughter was underwater. Panic set in as she didn’t reappear. 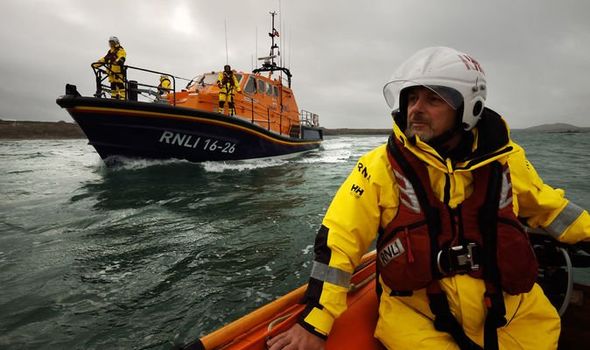 Submerged by the waves, Molly was caught in a vicious current that spun her around like a “washing machine” distorting her sense of reality.

“I thought I was only under water for a few seconds but my dad said it more like a minute and he was about to jump in,” she says.

“When I saw him, I started screaming, ‘Dad, dad, dad’. He told me to try and swim towards him, and then I had a little voice in my head that said, ‘Kick back and relax’.”

Luckily, Molly’s water sack was attached to her kayak preventing her from being pulled away by the swell.

But the pair found they could not get back into their boats without capsizing again and the water was rising, nearly pulling Chris into the sea at one point. Within 30 minutes, Molly was in tears.

“We need to call for help, this isn’t going to get any better,” she cried to her dad, who was trying to remain calm.

Thankfully, they had a phone signal and rang 999 requesting the coastguard, who alerted St David’s RNLI. An all-weather lifeboat reached them 20 minutes later from St David’s.

On board was RNLI mechanic and long-term boat volunteer Mike Chant.

“It sticks out in my mind because my granddaughter was born at 2pm in the afternoon of that day,” says Mike, who knows only too well the dangerous spot where Molly and Chris got into trouble.

“It’s a little island, virtually a rock maybe 15 to 20 yards across and where they were the tide was hitting them directly,” he says.

“If they had been a few yards either side and not been able to hang on to that rock, they would have been swept away and the tide would have carried them off,”

Because of the dangers of underwater rocks, the crew had to launch an inflatable Y-class rescue boat. Molly says the wait “felt like years”.

By this point, the adrenaline was wearing off and she was shivering intensely, unable to stop thinking about her near-death experience.

“I realised I could have potentially drowned – a week after my 18th birthday, I could have just died and this is how I was celebrating it,” she says.

Mike’s footage shows the dramatic moment Molly and Chris are found before being guided safely into the lifeboat.Sadly not everyone is so lucky.

Born and bred in the tight-knit community of St David’s in Wales, also the UK’s smallest city, Mike, 55, has been an RNLI crewman since his twenties attending almost 100 call outs in his time.

He has seen a “handful of tragedies” in recent times, which he admits can be tough to fathom.

“It’s always a sad time because you feel so helpless,” he says. “You really want to find these people and sometimes you just don’t.

“There’s nothing you can do. That’s the nature of the sea you know.” 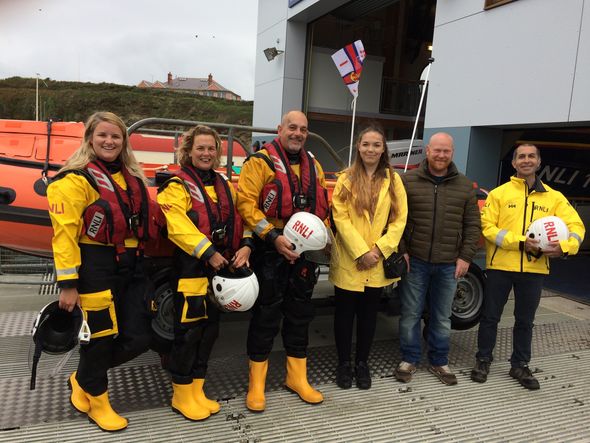 On other occasions, he has found people who have sadly already lost their lives.

“In those moments it comes back to the training where they have told you that we are there to help but it’s not our fault.

There’s nothing worse than going home and blaming yourself for somebody else’s tragedy that you had no part in and all you could do was try to help.”

Last week’s episode featured the sad story of fisherman and father-of-two Peter Moseley whose body was discovered 25 miles off the coast of Bridlington after he fell into the sea from his fishing vessel without a lifejacket on.

Mike says he’s a big believer in talking through experiences with others and cites the close-knit community of St David’s as a “second family” where people watch out for one another.

He was born and raised in the city, even becoming its mayor.

His father was a crab fisherman and the RNLI has always been the “hub of the community”.

“Everybody rallied around it when I was young,” he says. “When the lifeboat would go out, members of the Ladies Guild would bring cakes for the returning crew members or to sell to others.”

Each boat carries seven crew members, a job everyone takes seriously.“It is the sense of giving back, of doing something that is valued and worthwhile,” he says. “And it has a bit of adventure about it too.”

The pager can go off 24 hours a day, 365 days a year, and there have been some awkward occasions when it does, including at a fellow crewman’s funeral.

“He would have loved that,” smiles Mike.

The most nerve-shredding ones are “people who have fallen off boats as they are needles in a haystack”.

A dramatic boat rescue is one of the other cases featured in tonight’s Saving Lives At Sea featuring Cornish fisherman Nigel Taylor, 47.

Last July he was working in his day bunk on his boat when his crewman Ian Richardson shouted “fire”.

There was a blaze in the engine room which Nigel attempted to fight with a 20-litre fire extinguisher. “It was like a scene from a disaster film – she was well ablaze,” he recalls. 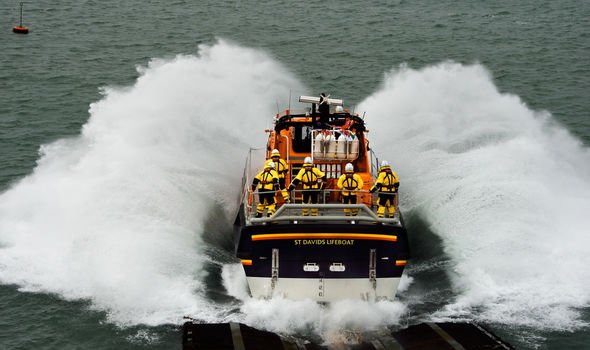 The two men realised they had no option but to abandon their craft and release the life raft.

By now, the wheelhouse was impassable with flames so it was impossible to send a mayday message.

Luckily, the two men were able to send a distress call from their mobile phones after paddling away from their doomed boat.

Full-time RNLI Penlee coxswain Patch Harvey, an RNLI lifesaver for 14 years, was returning from a training exercise at that moment when he got an urgent launch call from Newlyn Harbour’s coast guard.

A former fisherman himself, having known Nigel for years, Patch, 50, recalls: “A load of questions go through your head. ‘Have they got burns or bad smoke inhalation? Are they okay in the life raft? What are we going to face?’”

The crew sped to the scene nine miles offshore, arriving within 20 minutes. The burning boat wasn’t hard to find because of the towering plume of smoke above it.“As we approached, we could see the life raft and only the hull of the boat – there was nothing left, just flames and smoke,” he says. 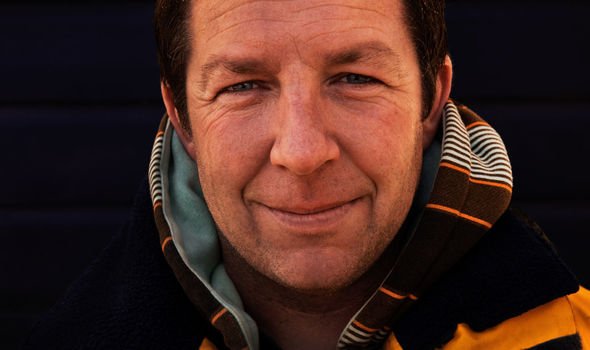 Nigel and Ian were safe, although visibly shaken.

Nigel’s partner Sarah MacDonald was pregnant with their first child Roslyn at the time, now nine-months-old.

“It was a life and death situation so it did have a long-lasting effect on me,” he says.

He’s not stepped on board a big boat since and sought counselling for PTSD from the SeaFit programme through the Royal National Mission to Deep Sea Fishermen.

After the rescue, Patch and his team had to return to the blazing boat to protect other passing vessels in the event of an explosion.

“We kept about a half-mile distance for our own protection and eventually watched it burn down to sea level before it sunk,” he says.

Fortunately, it was only the second time as an RNLI crew member that Patch witnessed this kind of incident.

He lost a good friend in March 2004. Newlyn fisherman and father-of-two Mark Jose, 42, whose wife was pregnant with their third child, was swept out to sea after his boat sank.

The two other occupants, Carl Thomas and Malcolm Nicholls, were rescued after 12 hours in a life raft.

“It was a horrible situation but unfortunately it can happen a lot with fisherman,” Patch says. He stresses every life saved makes his job worthwhile.

Rescues have been quieter since Covid-19 but so have the fundraising activities that keep the RNLI operating as a charity.

“The RNLI relies on the support and the generosity of the great British public to continue its life-saving work,” says Mike.

And if anyone knows of its importance then surely it is Molly, who has since braved the water again.

“I will be forever grateful,” she says of Mike and the other RNLI volunteers who saved her.

“Knowing that the volunteers are normal people themselves who risk their lives for others – I don’t think I’ll ever be able to repay them.”